Looks like Mister Coin-tosser wasn’t lying, after all. As you’re walking back from the pier you’ll be stopped by a reporter named Dino , who recognizes Prince Noctis. Dino, who is apparently an Italian guy from New York, decides to blackmail you - you do him a favor, and he won’t blow your cover. Of course, he gives you a great reason to reject him, since, as he points out, Noctis and his pals haven’t been doing a very good job at keeping a low profile this entire time, and there’s no explanation why it’s an issue now. You (or rather, Ignis) also get more experience if, when you get a dialogue option you choose “ Stand my ground “ instead of “Listen to him”.

In the end, however, the choice is illusory, and in return to his silence he wants you to go and mine him a gemstone. “Go mine me some gems, prince, or I’ll call the Paparazzi on you!” has to be one of the oddest quest motivations in a Final Fantasy game, but there it is. On the plus side, he’ll also help you get a boat if you do his job. What a strange man.

Of course, you need not be in such a hurry to deal with Dino’s blackmail. There’s another side quest you can do without even leaving Galdin Quay, not to mention a bit of exploration along the beaches nearby. Head back down the curved pier and you’ll find a cat ; a most unusual quest-giver, but this quest still makes more sense than the last one. After deciphering the pest’s meows, Noctis will come to the conclusion that kitty wants fish. More specifically, the fussy feline wants some Trevally Fillet , which you can obtain by fishing for some off the dock near Bob’s Bait Emporium, or by buying some from Aldare’s.

Once you have some fish in your possession, return to the cat, who isn’t satisfied with what you’ve brought it. Instead of ignoring the picky pussy and giving up like any sane person would do, Noctis decides that the cat wants its fish cooked. If you want a quest reward, you need to indulge the animal. Head back to the quayside resort and talk to the lady at the Mother of Pearl restaurant and waste her time by helping you out by turning one of your Trevally Fillets into “Coctura’s Cat Food” . Now that you have a fresh-caught fish prepared by a professional, high-end chef, return to the cat for your quest reward.

Offer a spoiled kitty some Trevally, and the wretched cat will dramatically reject it! (left) Visit the Mother of Pearl and have the fish properly prepared to appease the fussy feline (right).

As for general exploration, there’s not too much lying around. From the Galdin Quay outpost (the part on the beach, not the resort) you can find a Treasure Spot to the south-east and another to the north-west, yielding a Star Shell and a Fencer’s Anklet , respectively. Further along the beach to the west you’ll find the Lachyrte Haven , should you want to camp somewhere, while along the beach south of Galdin Quay you’ll find another fishing spot - Galdin Shoals . When you’ve explored as much as you care to, it’s time to turn your attention to this matter of blackmail.

The fastest way to get to the quest destination is via your car, so head back to the Regalia, pick Auto/Quest Location, then select the quest “A Gentleman’s Agreement”. Ignis will chauffeur you there, with minimal banter. When you arrive, leave your chariot behind and make your way south along the road, then up a hill. Cross a land bridge that runs over the road, go through a short cave and behold a giant, sleeping bird! The party wisely decides to play at being stealthy to avoid becoming bird food.

You can play at being sneaky if you want, but there’s no need - wake the bird and it’ll simply fly off. Phew! Make your say south around the bird and plunder the gemstone deposit to score a Garnet Stone - hardly a gem worthy of a prince’s time - then backtrack to the Regalia and return to Galdin Quay. Speak with Dino and give him the stone and he’ll reward you by giving you a Garnet Bracelet , as well as some information about the nature of the coin that was thrown at you.

Sneak past the giant, sleeping bird with one pair too many wings (left) to reach the mineral deposit where you’ll find the stone Dino wants (right).

Talk with him again and you’ll get a bogus warning about “being unable to return for some time”. Some time really means a few minutes, so don’t worry about it too much. On the other hand, there is something that you may want to consider before waiting for the ferry - you get a free night at the Quayside Cradle , with its x2.0 experience multiplier. If you were to, say, go get yourself a mighty store of experience before turning in for the night, nobody would blame you.

In any event, when you’re ready to wait for the ferry, talk to Dino and consent to the bogus warning, after which you’ll automatically rest and wake up to terrible news. 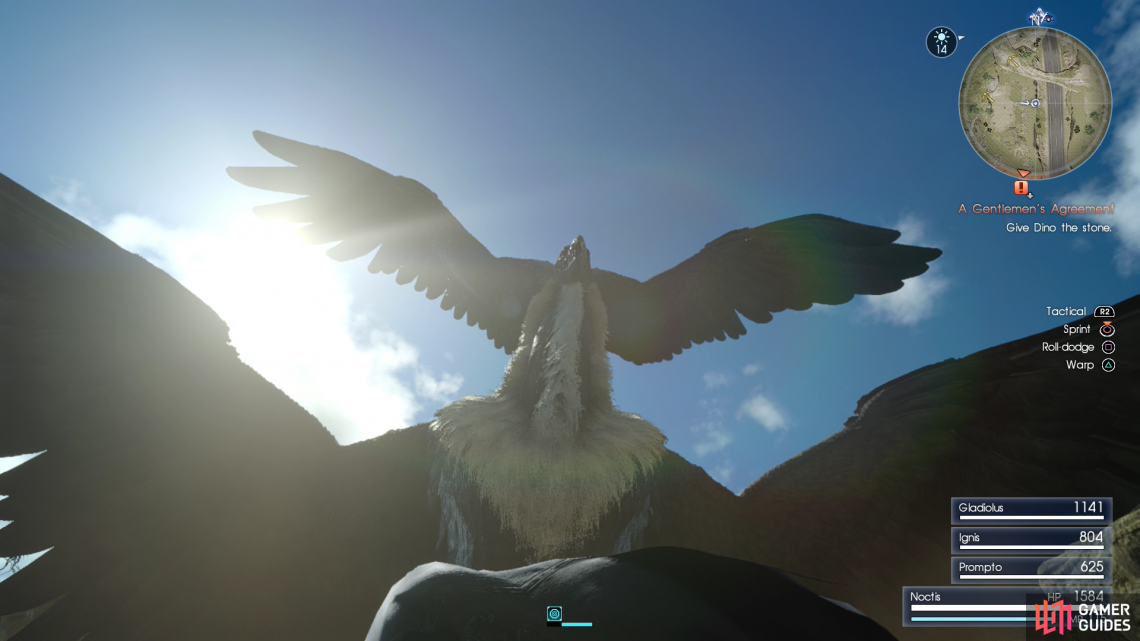