Dominguez is protected by a shield drawn from the three Kukulkan warriors bound to three separate statues, so you can’t attack him right away. To stop the flow of power, you have to break open the back of the statues. The warrior will be released and then joined by more enemies, so take them out.

You can hide in concealment bushes and walls to get away and hunt the warriors with stealth tactics, and you can even climb the trees to attack from a higher vantage point. You can kill the warriors with any weapon of your choice, and while it’s not necessary to kill them all before moving on to the next statue, you’ll still need to fend them off while doing so.

Additionally, while you can’t make Lara step off the outer edges of the area, the enemies can get close enough to knock her off, so be aware of your surroundings. 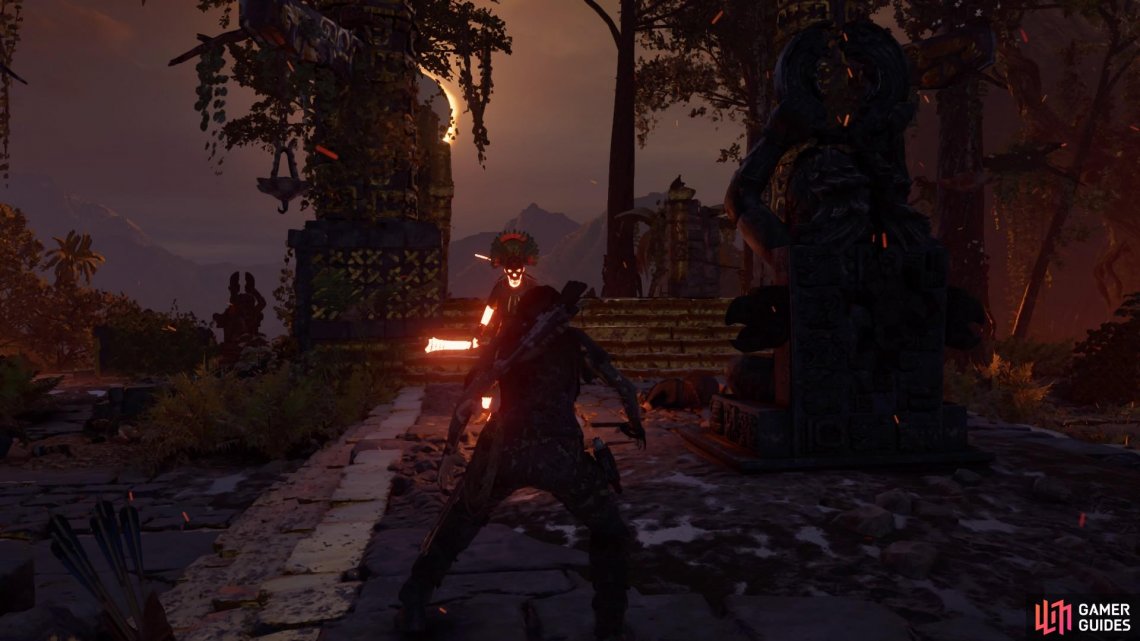 Once the three statues have been destroyed, the flow of power will be abruptly stopped, causing Dominguez to come after you himself. He’ll attack with a sword and is shielded at first, so incapacitate him by using a heavy damage weapon. The rifle will mostly do the trick, but he’s particularly susceptible to the flare rounds from your pistol.

Once the shield is down, Dominguez will be vulnerable, so rush in to attack him as quickly as possible. If you don’t reach him in time, you’ll have to repeat the process. After the first takedown, Lara will acquire the dagger.

More warriors will join the fight, so while keeping your distance from Dominguez, make sure to pick them off as you move around. You can continue to run and hide in the vegetation, walls, and trees, but this will become increasingly harder to do as the fight goes on. However, there are also red explosive urns available during this phase, so use these to your advantage whenever you can.

When Dominguez gets close enough during this phase, he’ll attack with the sword which has great range and fire damage. Evade the attack the same way you would evade any other melee strike and continue to keep a distance. After three successful takedowns, Dominguez will gain the ability to teleport straight to Lara – evade this manoeuvre as much as possible. At this point, stealth tactics are useless; Dominguez can teleport to you whenever you’re out of his line of sight.

Tip: Remember to heal whenever necessary throughout the fight – there are resources around the area that you can pick up as you go if you need to top up.

Treat this phase like the last – stay on the move, keep a distance, and continue to open fire to weaken his shield and make him vulnerable. After several knife stabs, Dominguez will finally fall.