EYE OF THE SERPENT – EXLPORE THE CENOTE

Swim through the tunnel ahead and resurface on the other side, then climb and scramble up the ledges to duck under a tree. After Lara notices a temple below, use the zipline to drop down into the Cenote Vista Base Camp. Upgrade or purchase Skills if needed.

As you enter the doorway on the right, you can pick up Document – Journal of T. Serrano 2 as well as some resources, then scramble up the wall. Follow the trail and dive into the water below. 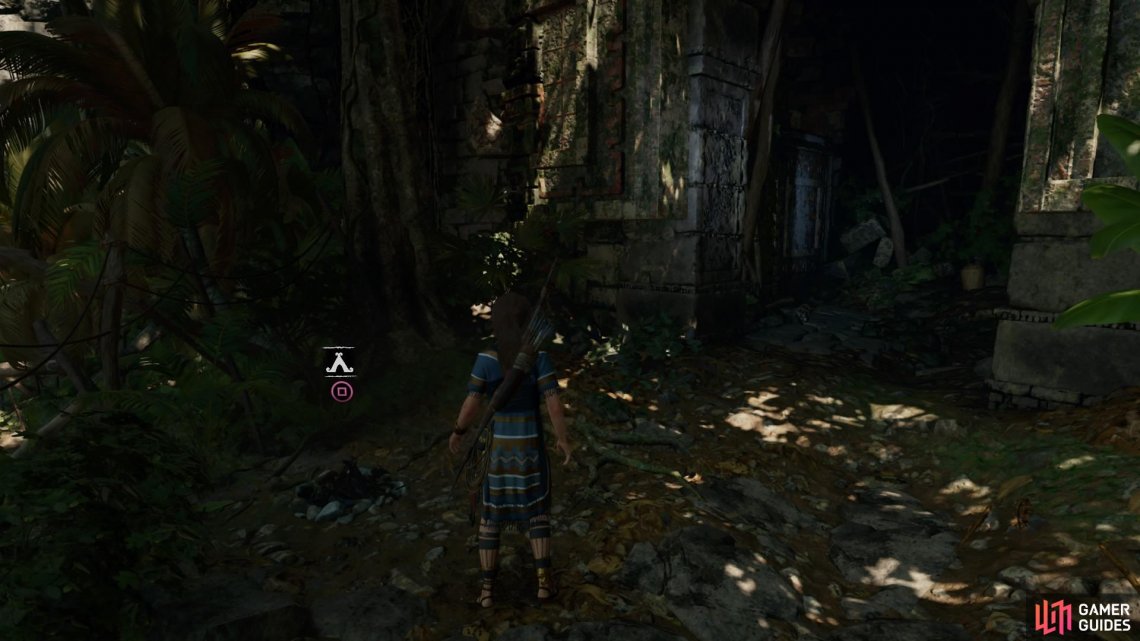 You can take the time to explore the cenote if you like – there are resources, survival caches, and Relics to find, as well as starting two region challenges. Directly beneath your starting position, however, are a group of piranhas that could spot you as you search for the goods.

Before moving on, swim left towards the shore and look inside the structure for an Explorer Backpack. You can also pull down the first effigy for the Respected region challenge. Directly opposite is the structure on the right side of the area – swim across to it to pull down a wooden barrier and pick up the Archivist Map. 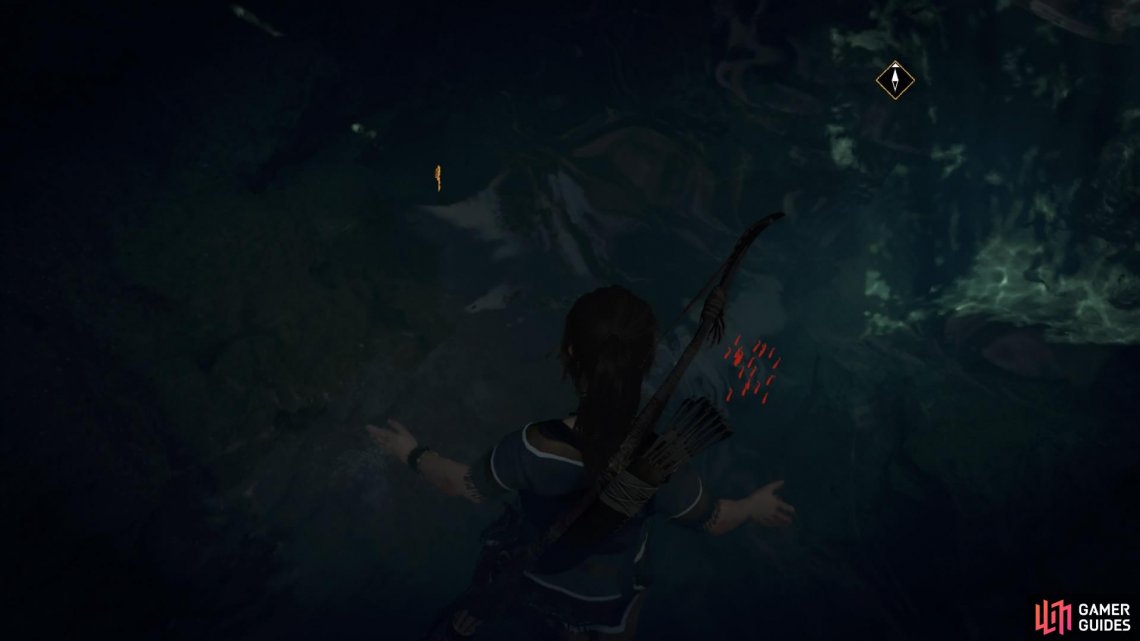 (1 of 5) Watch out for piranhas below

When you’re ready, head for the temple entrance on the far side of the area, and dive underwater to swim through the tunnel. You can explore this area before moving too far inside to find a Relic and a Document, and there are a couple of air pockets in case you need to catch your breath. There are also more resources lying around.

As soon as you leave the tunnel, swim towards the left where you can resurface and climb out to pick up some Jade and inspect a wall mural. Before you resurface, you’ll find a small chest with Relic – Knight’s Morion inside.

When you reach the first air pocket, swim forward a bit and then head right (ignoring the obvious route ahead) to follow the tunnel to a secret area. Resurface and climb out to pick up Document – A Warning and some more Jade. 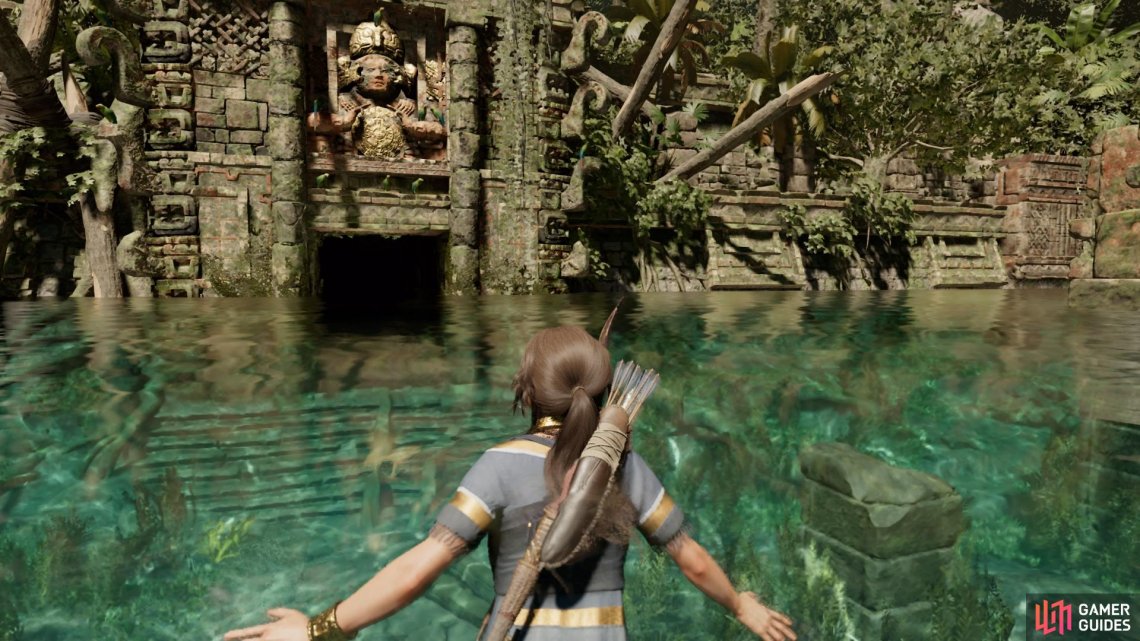 Once you’re done exploring, follow the main path and exit the water. Move forward and make sure to disarm the trap ahead before you continue to a cliff edge.

Jump to the stone wall and scramble up to the ledge, then scale up and left along the craggy wall. Jump to the next ledge and shimmy around the left corner. Climb and rappel down, and swing to the platform ahead. 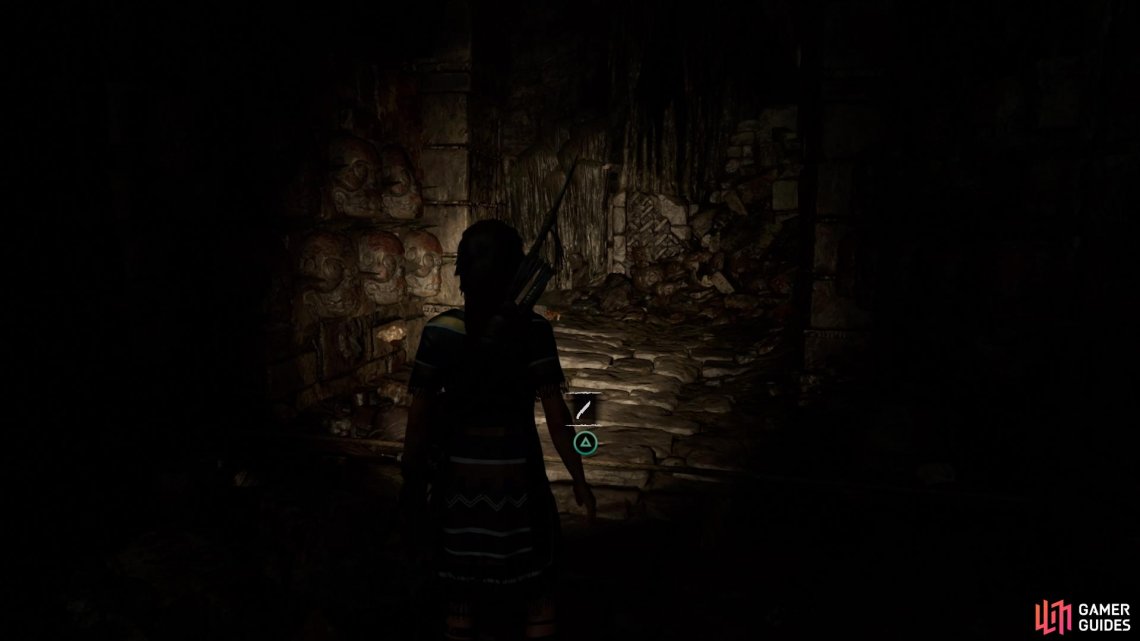 Go up the steps on the right and squeeze through the narrow opening. The path splits here – you can either continue the main path to the left or explore the Challenge Tomb on the right.

You can return later, so follow the story objective for now.

Head left at the split and pick up Document – Journal of T. Serrano 5 before jumping to the handhold. Then shimmy left and climb on to a narrow ledge. Sidestep along to the far end and jump to the craggy wall, then rappel down and wall-run to the wall on the left.

Scale left and up and scramble up to the handhold before shimmying along the left and climbing up. Head forward, climb to the next handhold and shimmy around until you reach the top. 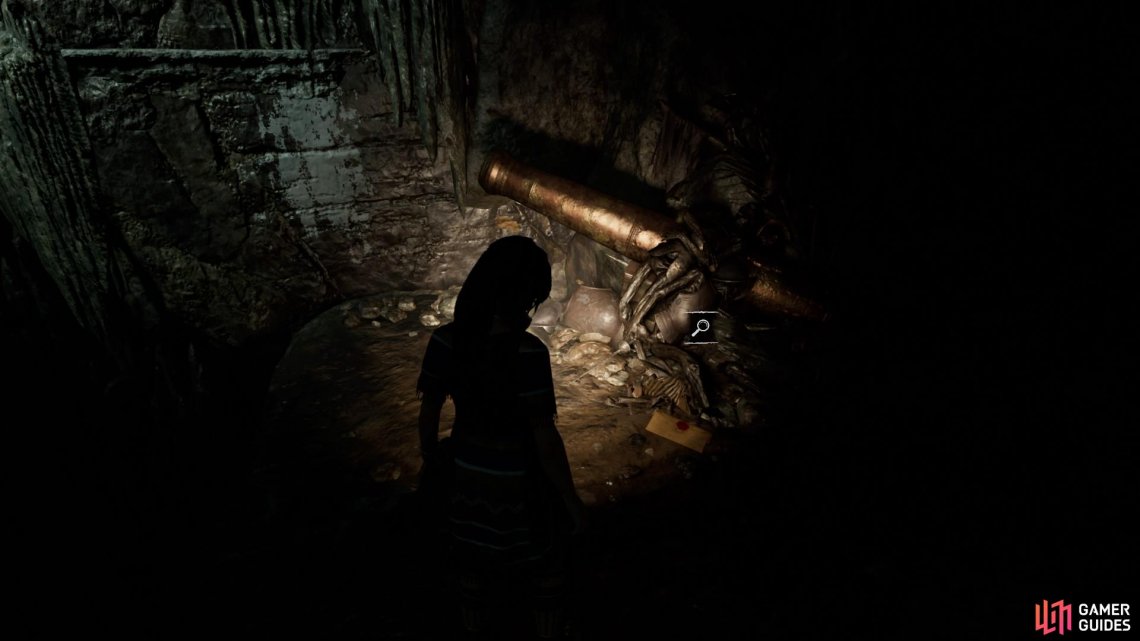 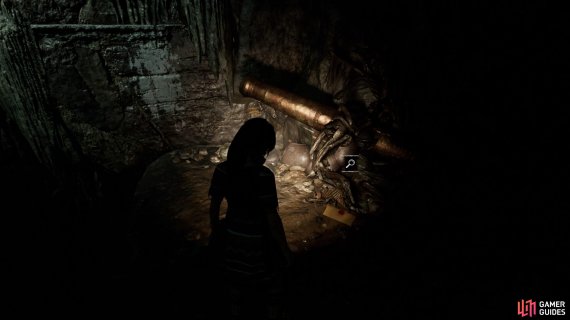 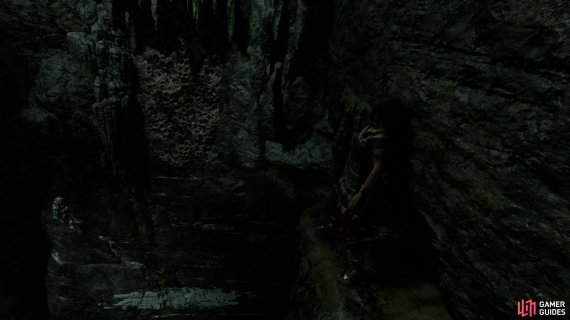 Document - Journal of T. Serrano 5 (left), Make your way around the cavern (right)

There’s a body hanging here, but you can cut the rope to get him down and pick up the Bishop 600 Shotgun to add to your inventory.

Note: The Bishop 600 Shotgun fills the final slot of your weapon selection. It’s a powerful tool in your arsenal for what’s coming up next, as the enemies are fast and deadly. The shotgun is great for taking them out quickly, but you need to keep ammo topped up as much as possible due to its slow reload. You can also use the shotgun to break through tough barriers throughout the game and continue to upgrade it at Base Camps.

Head forward to discover the Cenote Temple Ruins Base Camp and pick up some salvage. If you turn around, you can pull down an effigy that adds to the Respected region challenge.

From the Base Camp, run forward and use the shotgun to destroy the barrier. Squeeze through the opening and keep following the tunnel until Lara is tackled into a pit below.

It’s time to face the creepy enemies that have been stalking you this whole time – the Yaaxil. 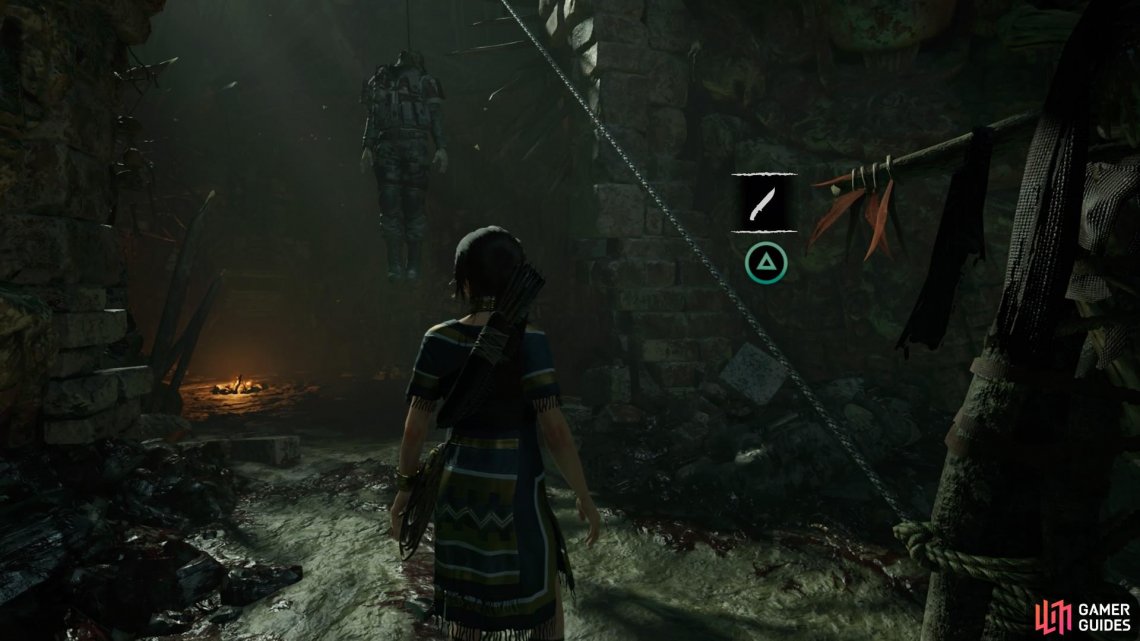 These creatures are strong – their close-combat attacks can severely damage you, so don’t let them get too close. If they do, immediately scramble and roll away from them to avoid their deadly swipe. They will charge at you, but this is where the shotgun comes in handy. As they come at you, you should be able to take them out in one or two shots easily. Try not to run through the ammo too quickly, and make sure to pick up extra ammo lying around the pit.

For any Yaaxil too far away, switch to a long-range weapon. You can also use the cauldrons sitting at several of the entry points – they emit green poisonous gas and explode when shot with any weapon, dealing high damage. 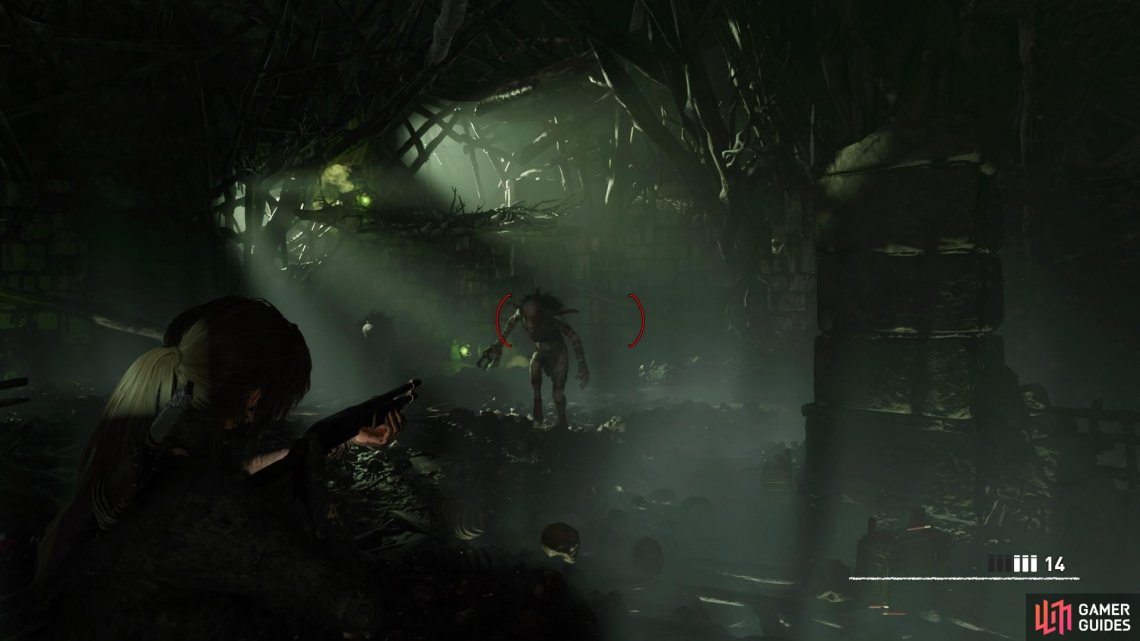 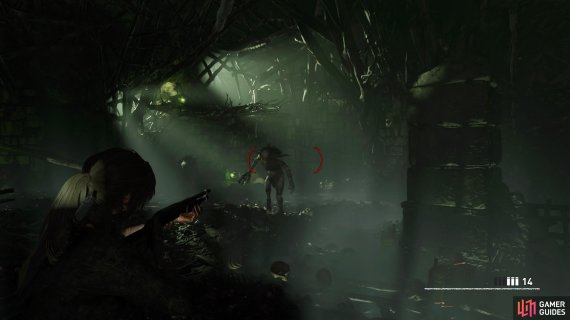 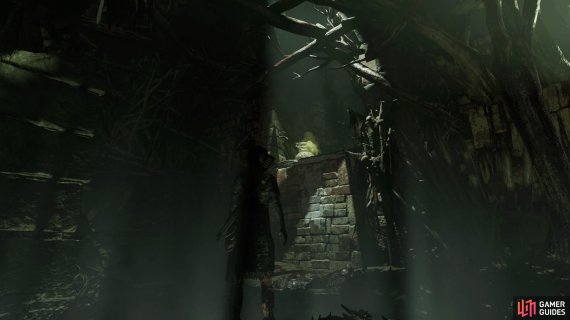 A short cinematic will pause the action for a moment as a group of Yaaxil break through a barrier above. To get rid of them quickly, wait for the barrier to break, and shoot the cauldron next to them. This is now your escape route.

With the Yaaxil dealt with, scramble up the wall and head down the corridor. You can pull down another effigy here to add to the Respected region challenge.

Tip: Puma’s Feint is a highly effective Skill against the Yaaxil’s melee attack. With the right timing, you can evade their swipe and activate a circular meter with a button icon in the middle. Press the correct button when the circle reaches the shaded area to perform a dodge and kill manoeuvre.

Wade through the water tunnel and into a chamber. You need to turn the wheel to get through to the next room, but first, climb out and head to the back-left to break down a pry barrier with your axe. Behind it is Relic – Brigittine Rosary. 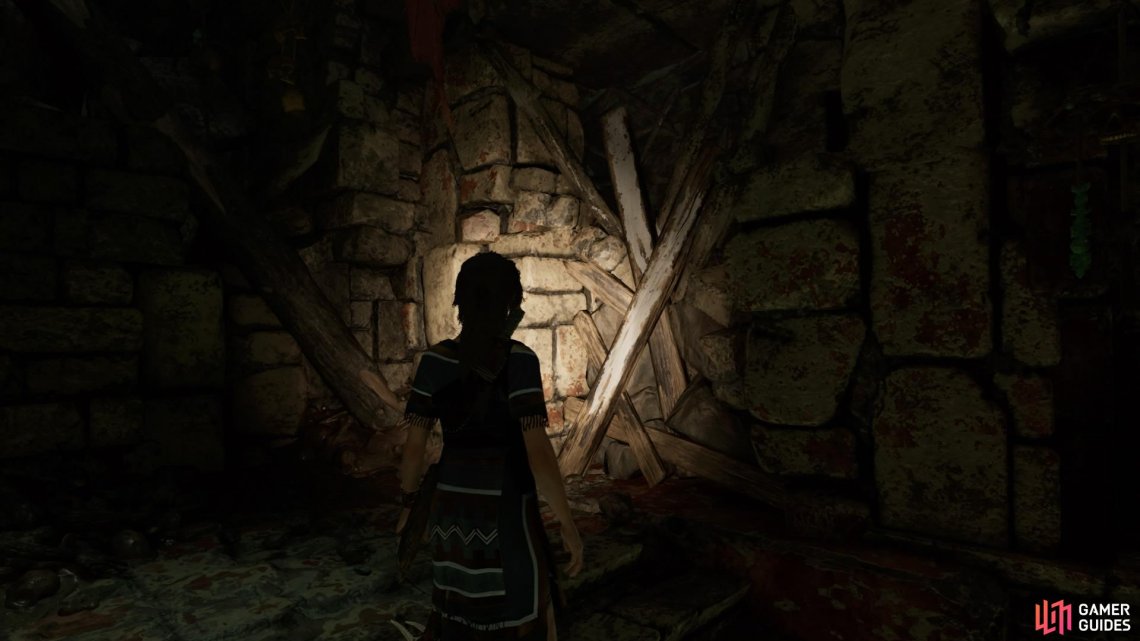 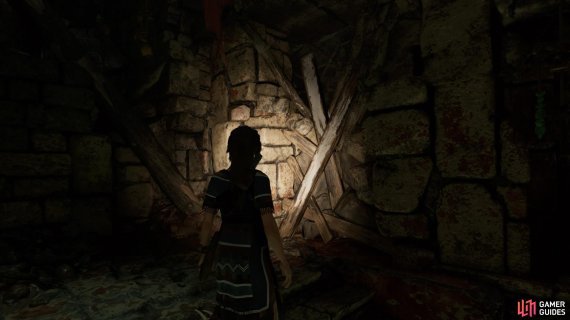 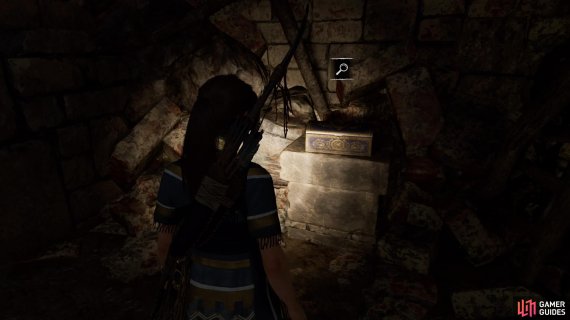 Follow the tunnel until you can climb out the other side and follow the corridor to disarm the spear trap. As you turn the corner, a Yaaxil will drop down in front of you – take it out, then pick up Document – Journal of T. Serrano 7 against the left wall. 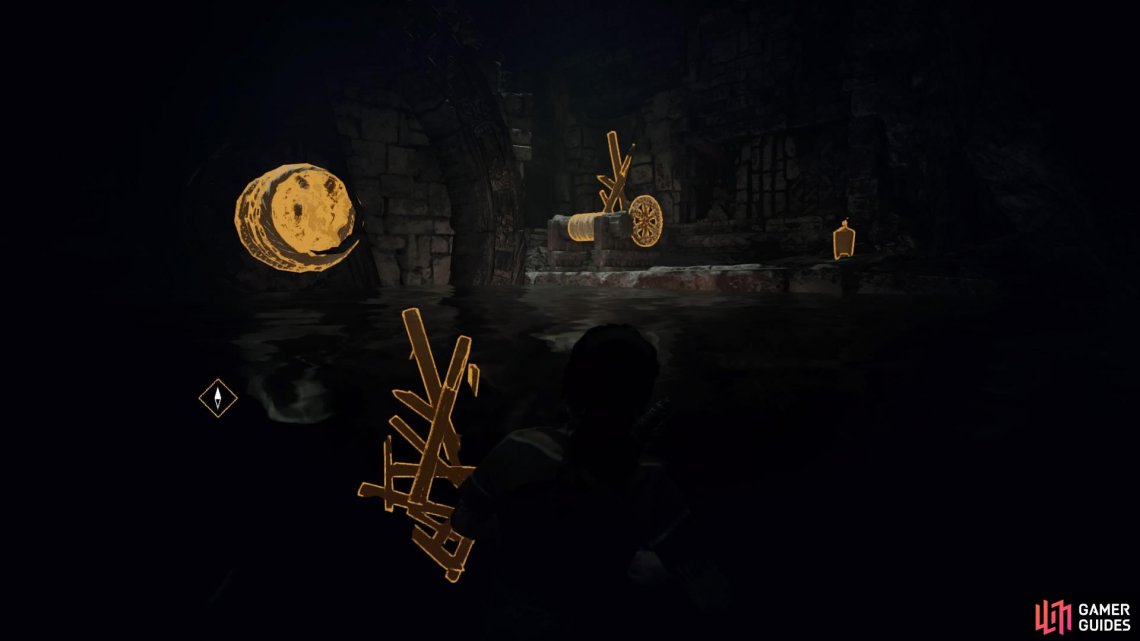 (1 of 5) Remove the barrier underwater

Head down the short corridor and attach to the craggy wall. Rappel down and Lara will automatically drop into the water below. 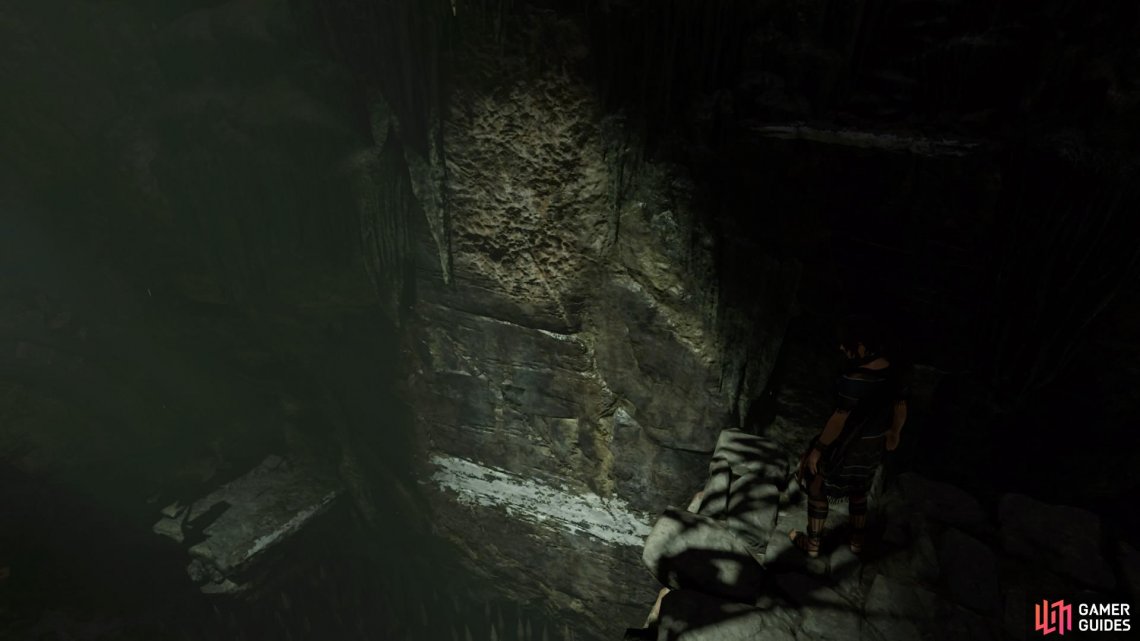 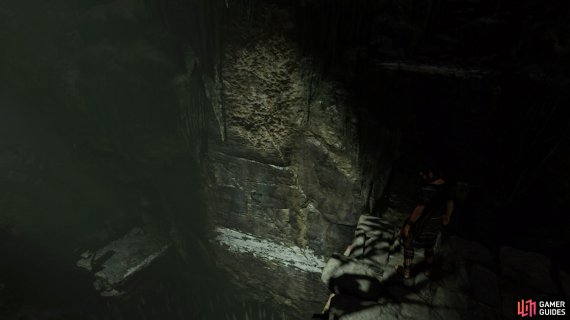 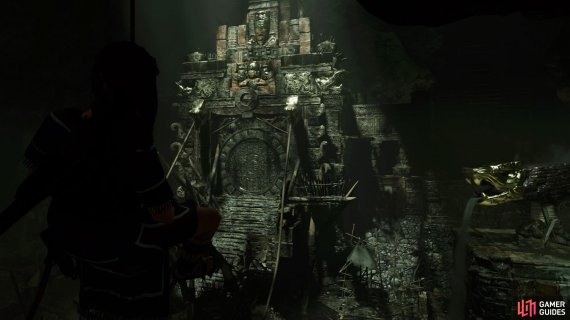 Traverse the wall (left), Drop into the cavern (right)

The large cavern is split into two with a large round door at the back. To open it, you must activate a waterwheel on each side of the room by solving the puzzles. 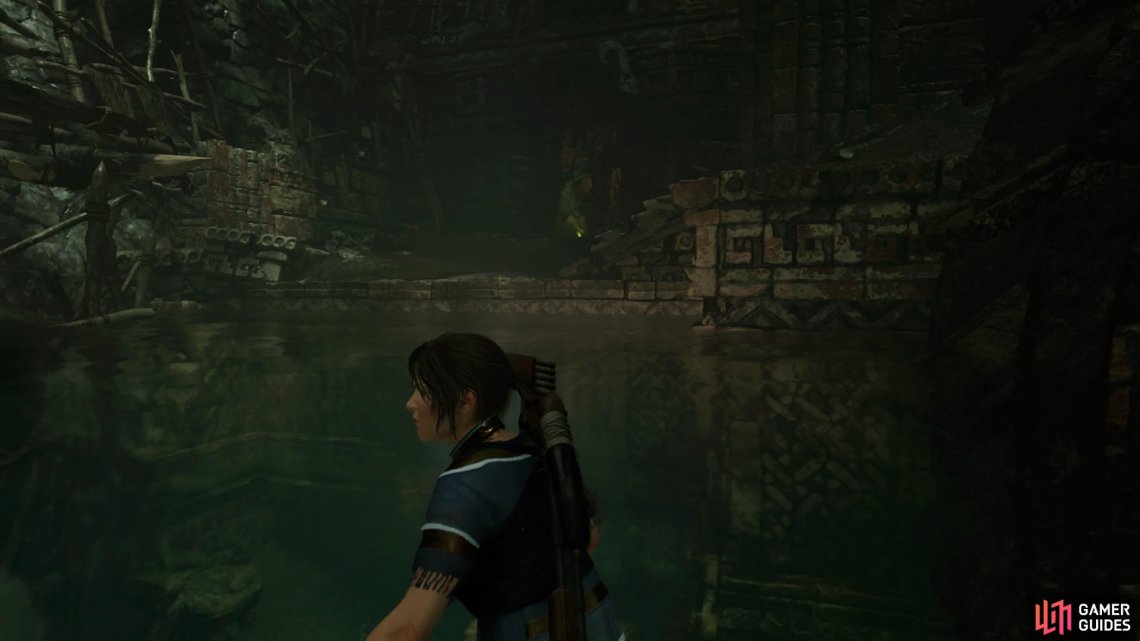 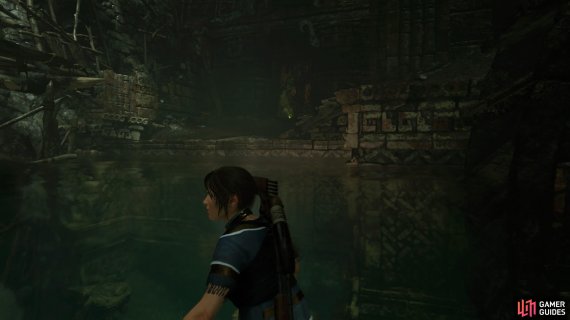 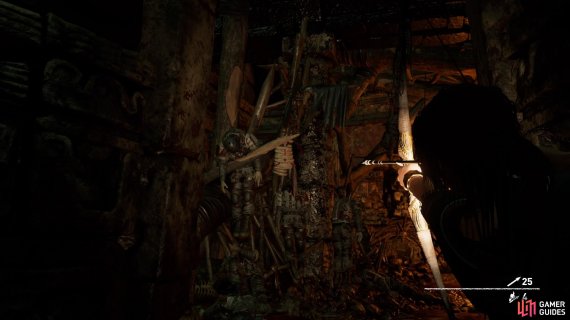 To activate the first waterwheel, do the following:

The Yaaxil will appear again, a mixture of archers and close-combat enemies, so make sure to dispose of them all. When you’ve done this, drop down into the water below and swim under the shaft to find an opening in the turning wheel.

Exit the water to the left where you can pull down the final effigy for the Respected region challenge. 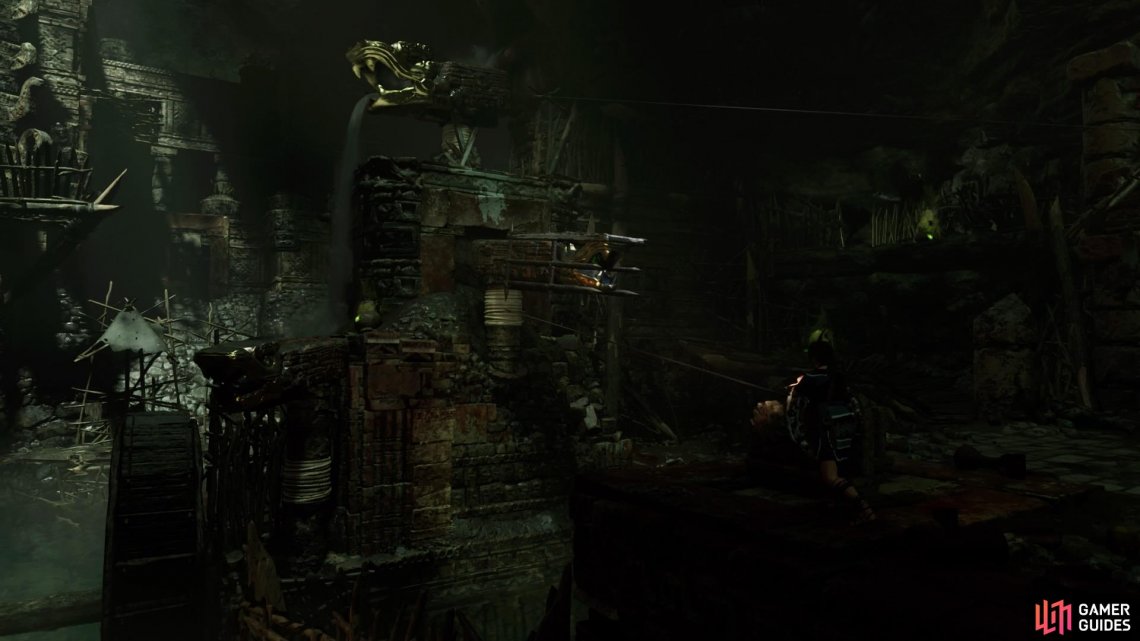 Scramble up the wall on the right and head to the second crank. There are two archers standing on the troughs – take them out with a long-ranged weapon.

This time you only need to turn two troughs. To open the gate, do the following: 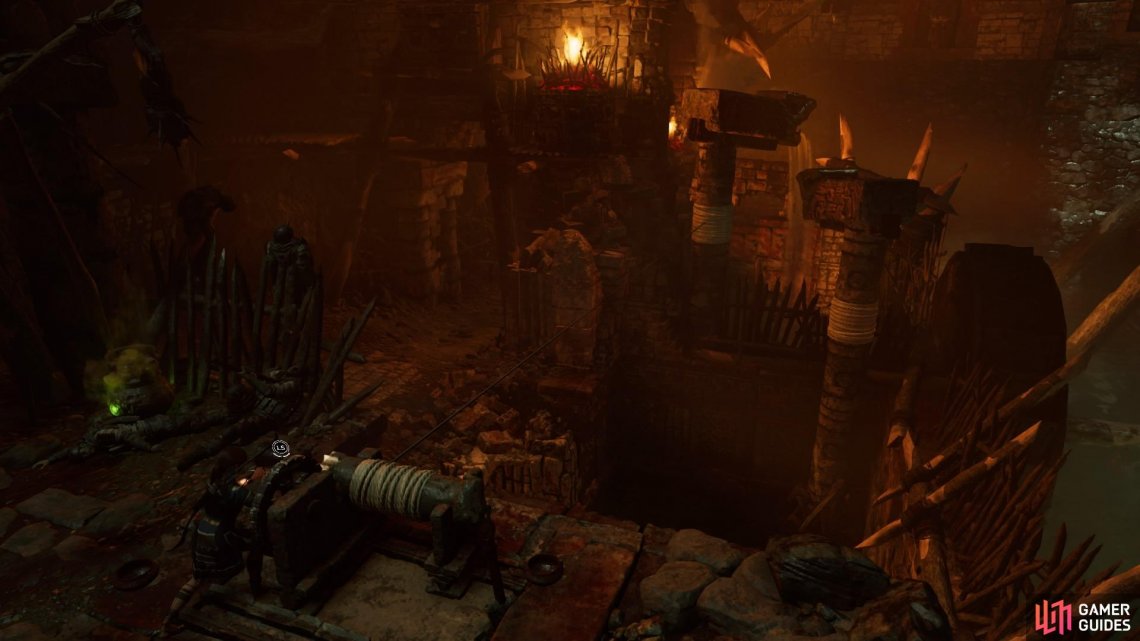 This activates a cutscene as Lara automatically makes her way through the door.

As soon as you regain control the Yaaxil are chasing you through the temple. Simply sprint, climb, and swing your way along the linear path. Avoid any obstacles and keep out of the enemy’s reach until you finally reach the end and slide down into a water tunnel.

Fast-swim through the tunnel until you reach an air pocket, take a breath and continue until you finally resurface. Exit the water and follow the trail. 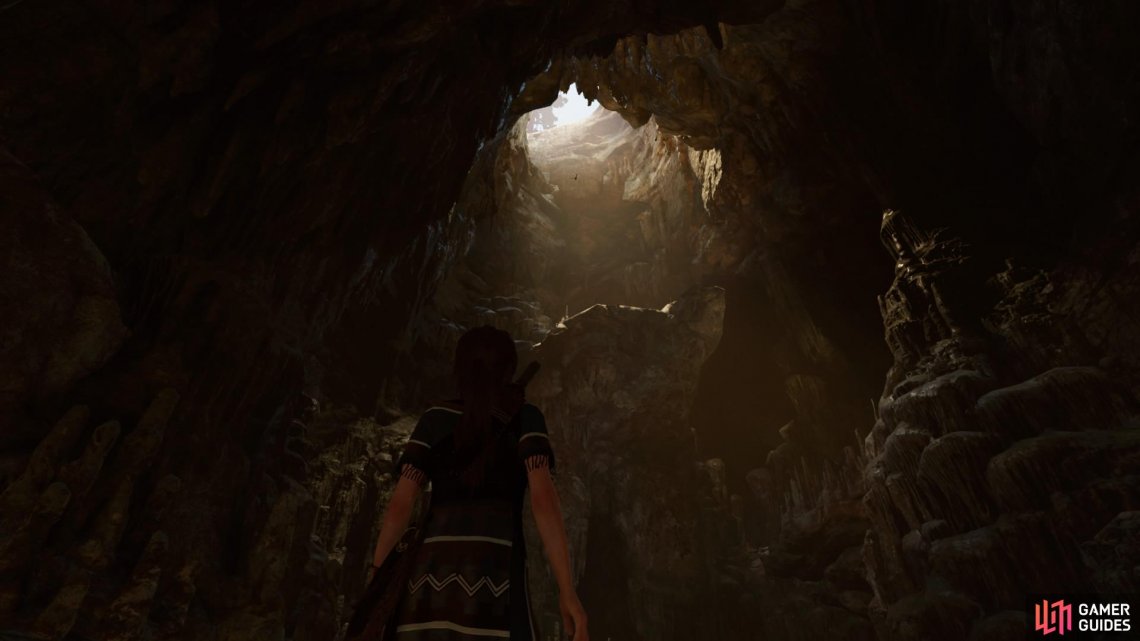 Jump the gap and climb the wall ahead. Scale up and then right until you can jump to the ledge on the other side. Then head right to squeeze through the gap. Lara will automatically pick up some new gear – Climbing Boots – before you continue.

Note: The Climbing Boots allow you to navigate overhangs on craggy surfaces. To traverse an overhang, simply jump and reattach just as you would with any other craggy surface. You can also perform lateral jumps to get across gaps between overhangs.

Jump to the craggy wall on the right and climb up. When prompted, attach the overhang, and continue up until you can pull yourself up on to the ledge.

Follow the path forward and scramble up the wall before ducking into a tunnel. On the other side, jump to the craggy wall and climb up to the overhang, just as before.

Keep traversing right, performing two lateral jumps, until you reach the end. Then rappel down from the overhang and swing across to the platform ahead. 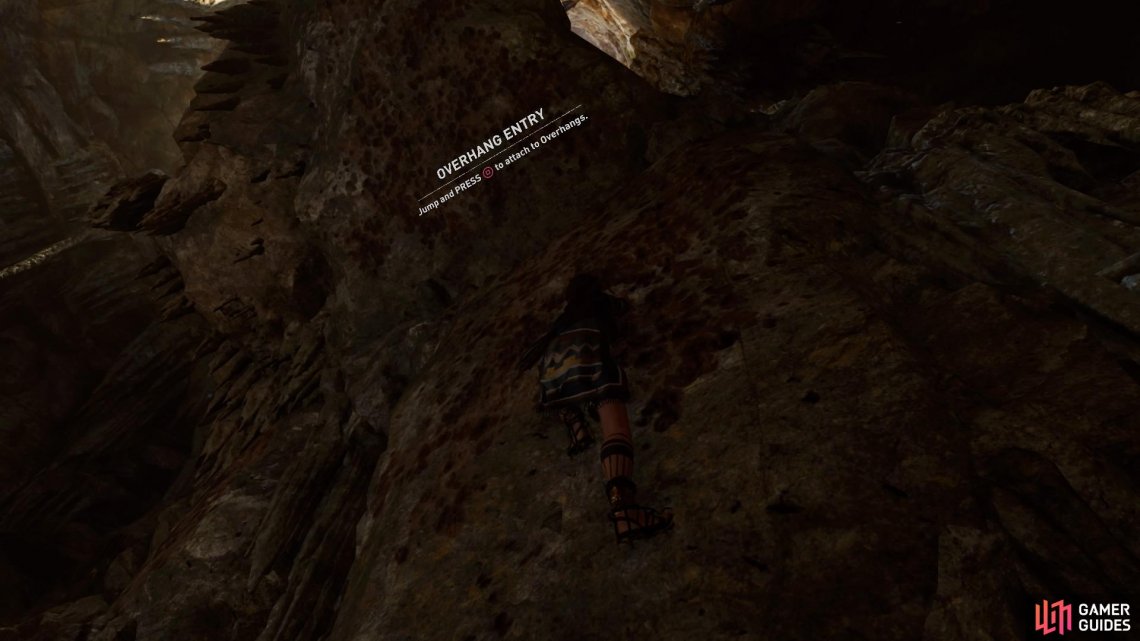 Run forward to scramble up the wall, then continue up to attach to another overhang and scale left, then up. Keep going up until you reach the top, then go left to jump from the wall and throw your Grapple Axe into the surface opposite. Climb up, head forward, and hop through the small gap. 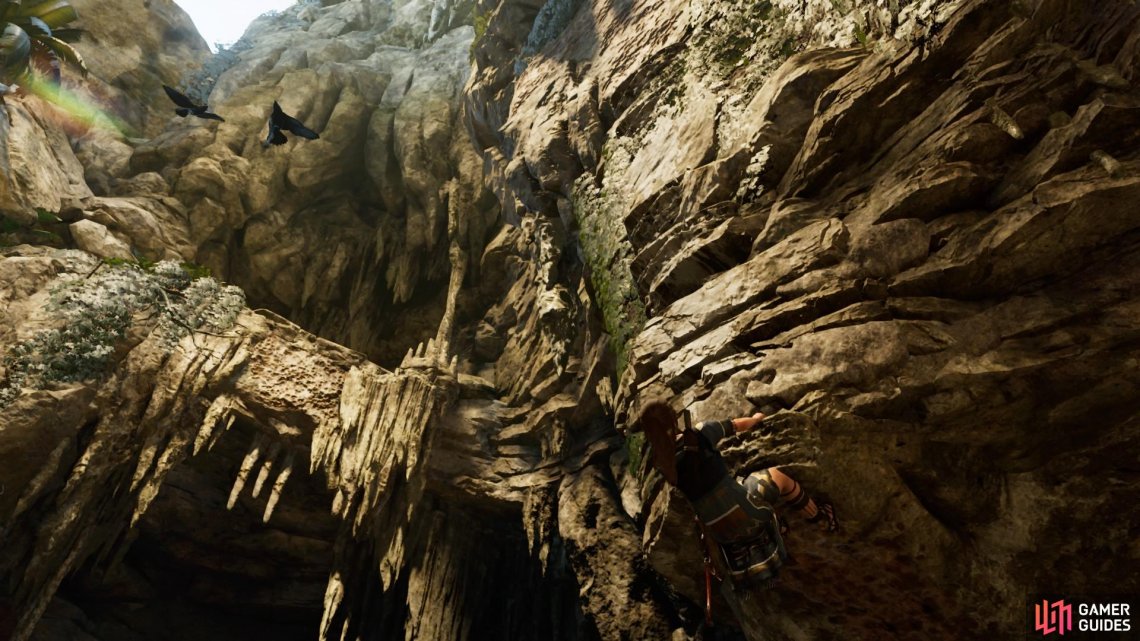 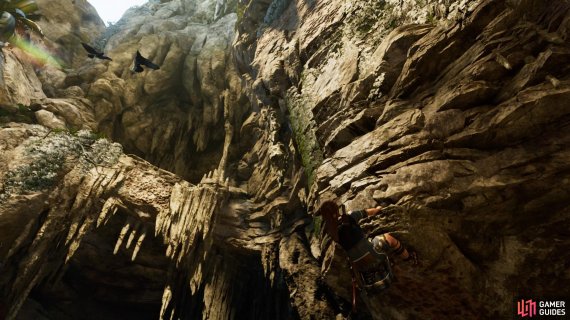 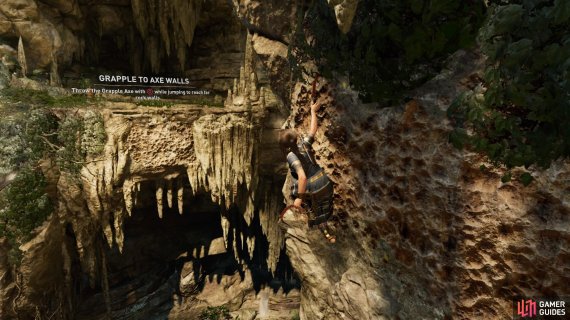 Climb to the top (left), Use the Grapple Axe (right)

Head forward and dive off into the water below. Fast-swim forward until you reach a pry barrier and use your axe to remove it. There are piranhas here, so hide in the underwater concealment patches to avoid them.

Keep moving forward and use the trapped air pocket if you have to, then continue until you can finally resurface at the end. When you exit the cave you’ll be back in Paititi – head right to find the Fishing District Base Camp. 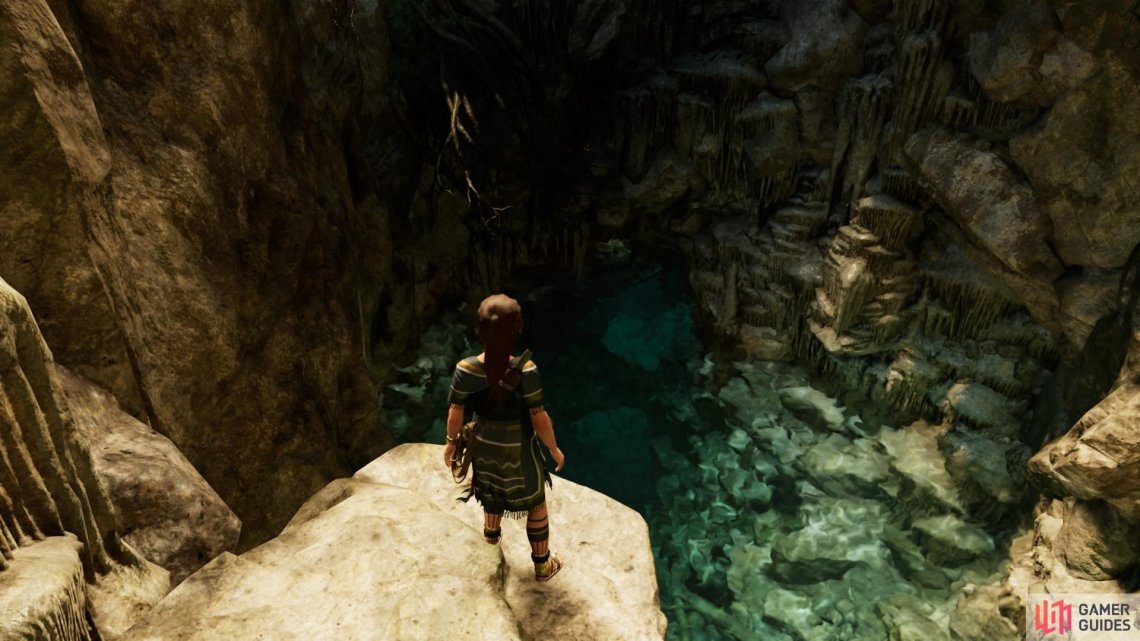