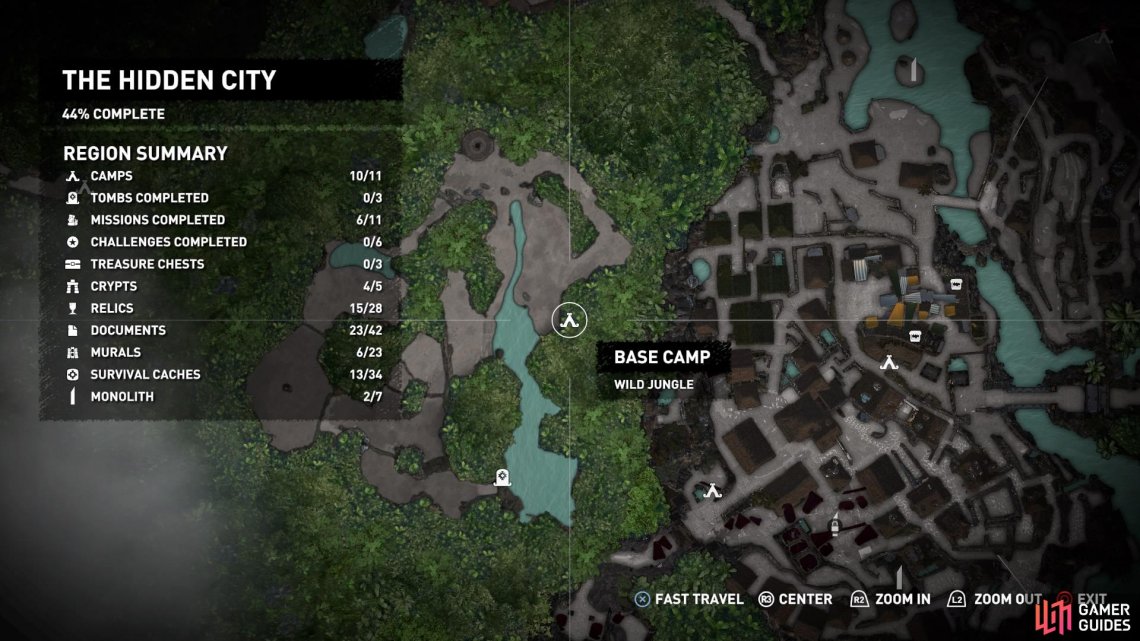 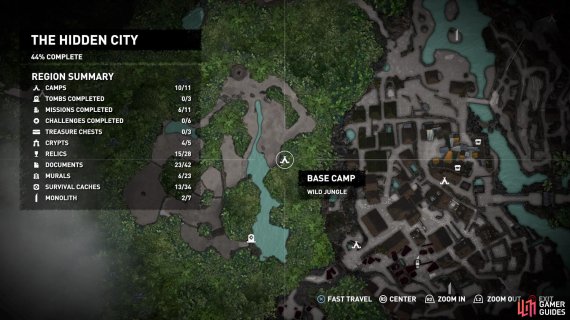 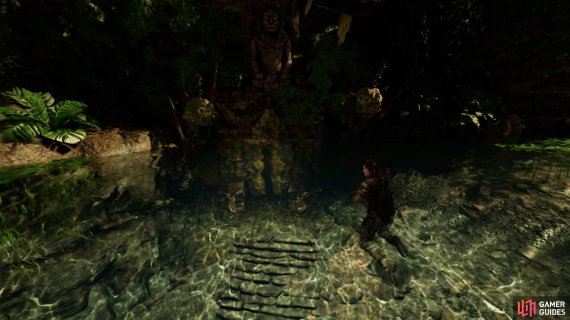 Start at the Wild Jungle Base Camp (left), Find the entrance underwater (right)

From the Wild Jungle Base Camp follow the river left. Dive underwater to squeeze through the tomb’s entrance on the right, and then again to go through the tunnel immediately to your left. There are no air pockets along this tunnel, so fast swim straight all the way to the end until you can resurface.

Climb out on the left and jump to the craggy wall ahead. Rappel down and swing over to the other side for a mural and the Ossuary Base Camp. 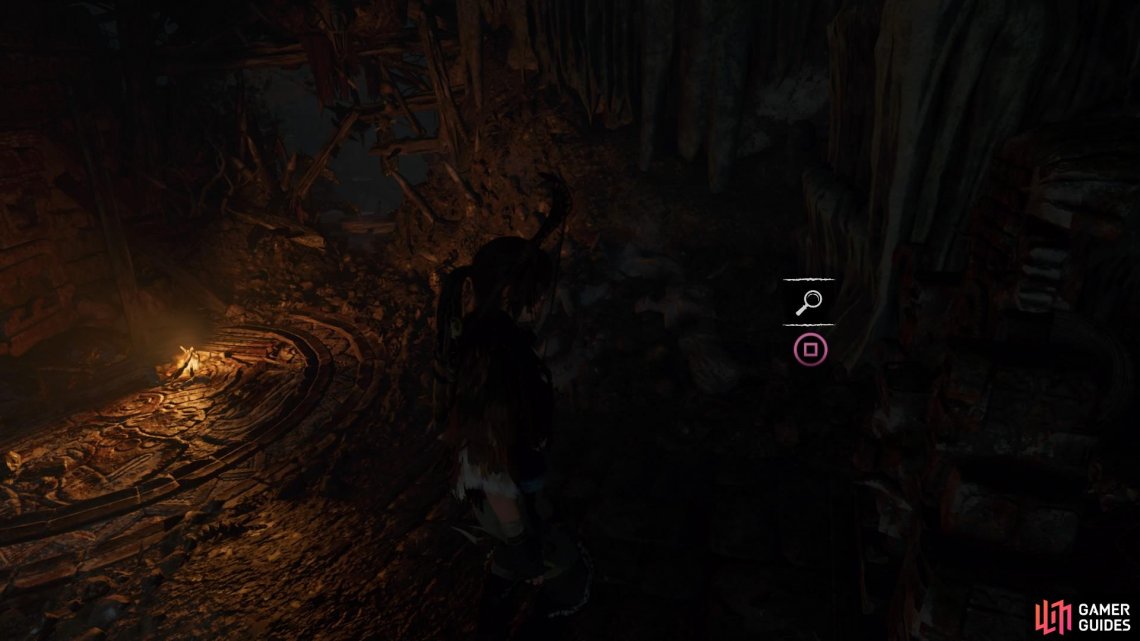 Pass through the obsidian blades and stick to the right to find a switch. Push it to activate the traps along the left walkway. Before you continue, you can jump down into the water for a survival cache. On your way back up, make sure to pick up Document – Warriors of Kukulkan.

Jump over to the left walkway. Hop over the first two blades, then stick close to the left wall to get around the last set. At the end of the walkway, leap to the craggy surface ahead and throw the Grapple Axe to catch it. Now rappel down and swing over to the doorway. 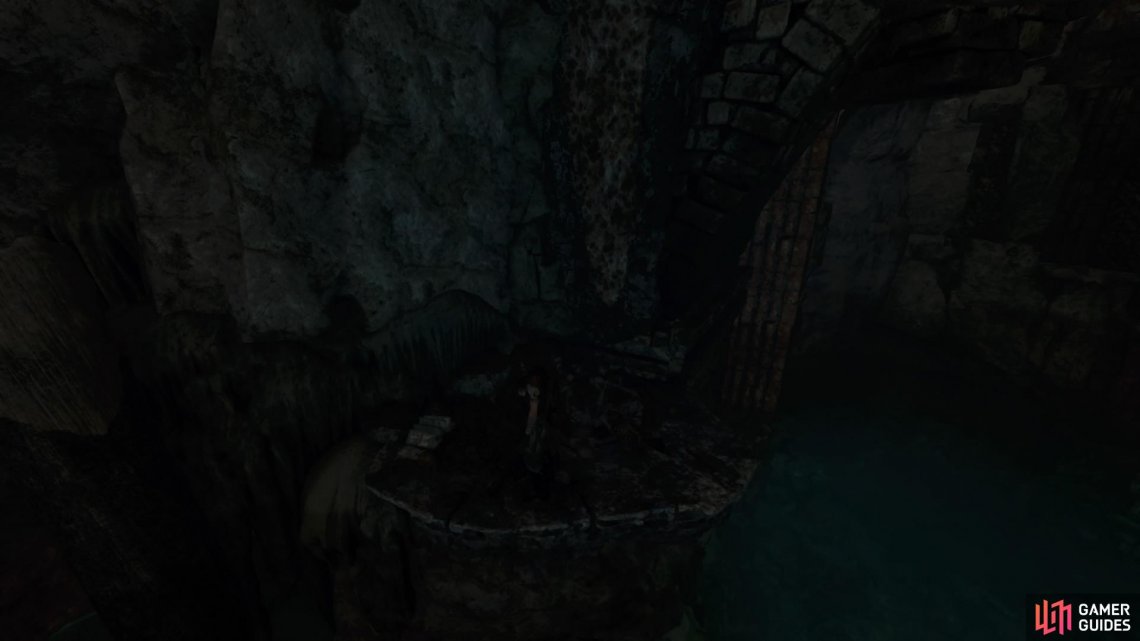 (1 of 4) Document - Warriors of Kukulkan

Head forward and inspect the mural on the left, then go right to push a lever forward until the blades ahead start to spin. When the blades reach their lowest point, jump over to the other side.

As you move forward into the room, a tall tower automatically rises from the ground, constantly spinning. Unfortunately, the stele is at the very top. 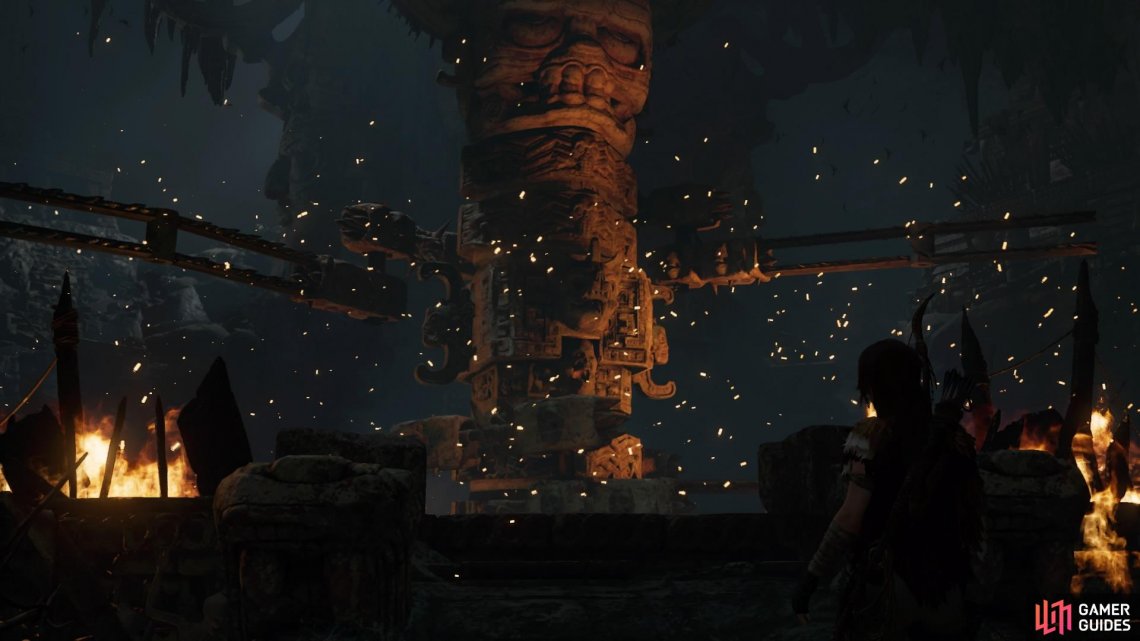 On the other side of the room is a lever – this is where you need to go. Approach the tower and wait for one of the arms to swing by before you make a break for it. Sprint to the left (jump over the arms if they come around) and jump off the wooden ramp to the outer ring. Follow it right to find the lever – pull it all the way to make the lower arms of the tower fold in.

Now you’re on a timer – you have to make it back to the start by sprinting around the outer ring. However, now that you’ve activated the timer, the traps have been set in motion. 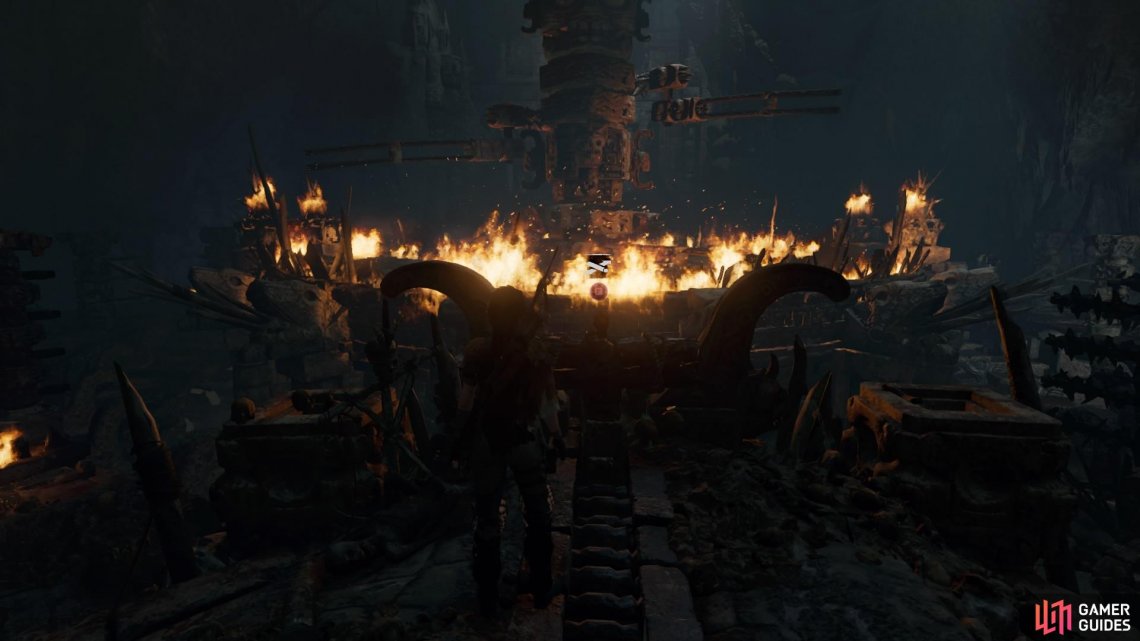 Make it through the obsidian blades – they will kill you in one hit if they catch you – until you reach the switch at the end. Push the switch in time to lower the tower.

Now you get to do this a second time! Approach the tower again and wait for the arms to swing by, then sprint off to the right to jump from the wooden ramp and back on to the outer ring.

Once again make your way to the lever and pull it all the way back. Make it through the obsidian blades to the switch at the front and push it. This time, the floor gives way, and while the tower has stopped spinning, it hasn’t dropped. 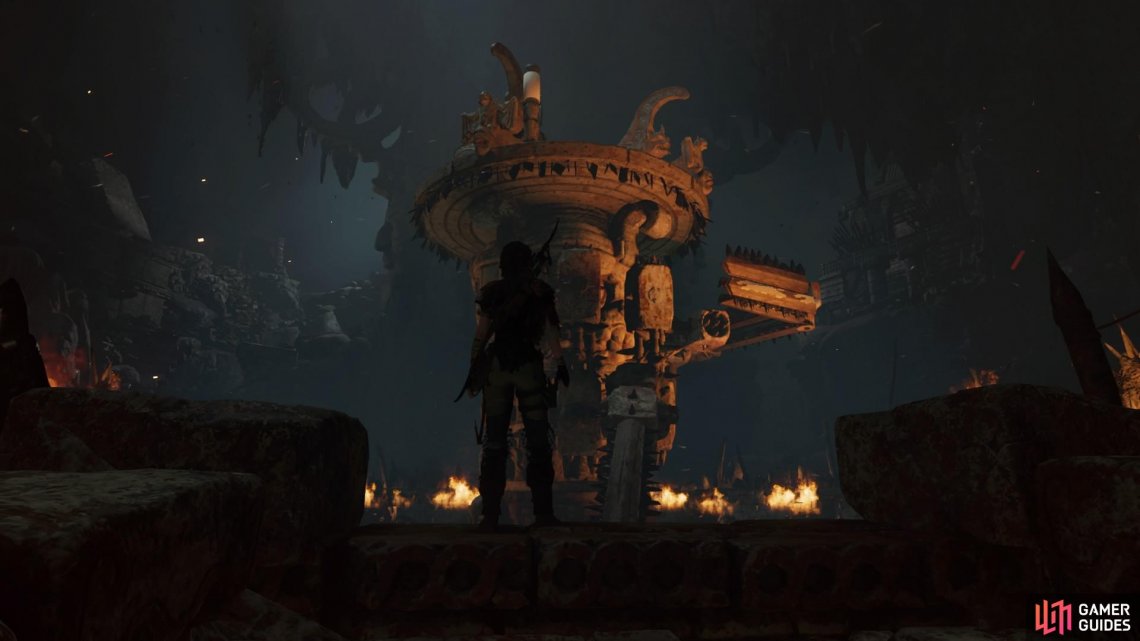 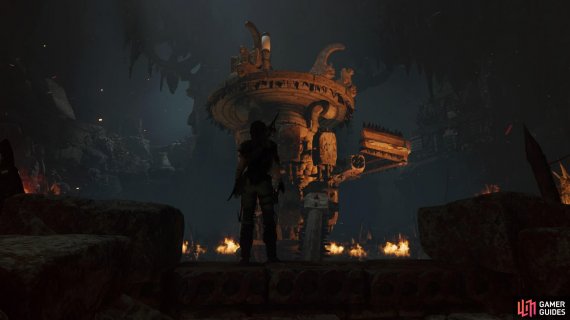 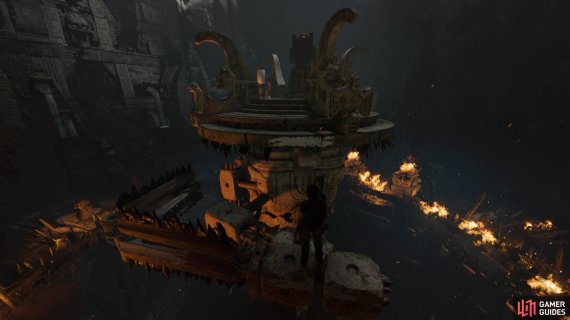 On your left, tether a rope between the post and the beam on the far side and zipline down. Head up the steps and straight forward – wait for the blades to raise before you jump across. Pick up the survival cache on your way through. 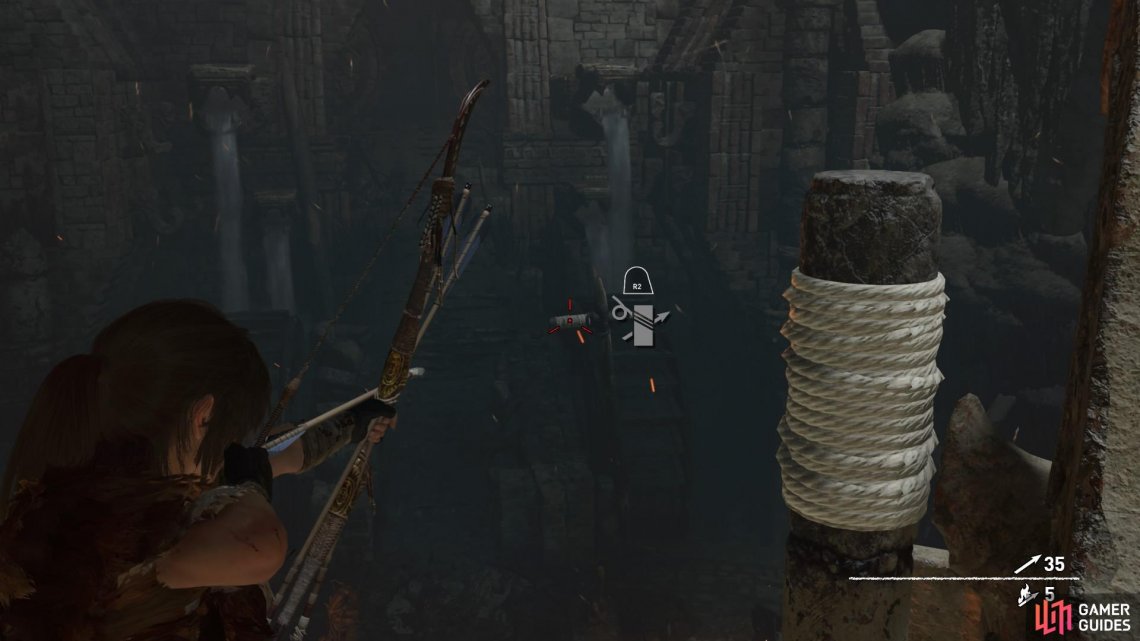 Follow the tunnel to the end and jump to the craggy wall. Scale left to jump to the next one and climb up. Scramble up the wall and make your way to the right until you have to duck through the next pathway.

At the end, you’ll have to slide down a slippery slope – jump from the wooden boards at the end and quickly attach to the craggy surface. Scale left and lateral jump to the next one, then climb up.

From here, hop into the water and fast swim your way back through the tunnel from before until you’re back outside.