The beginning of this chapter is dependant on how much information you obtained from the captured bandit. If all you managed was the letter about the German knight, you will have to speak to the innkeeper in Sasau. Persuade him to tell you what the knight wanted to know and you will find that he was eager to learn of the location of a crossroads somewhere north east of Rovna. If you already gathered this information from the bandit, you will know that it is the place where a merchant named Menhart planned to meet the bandit. 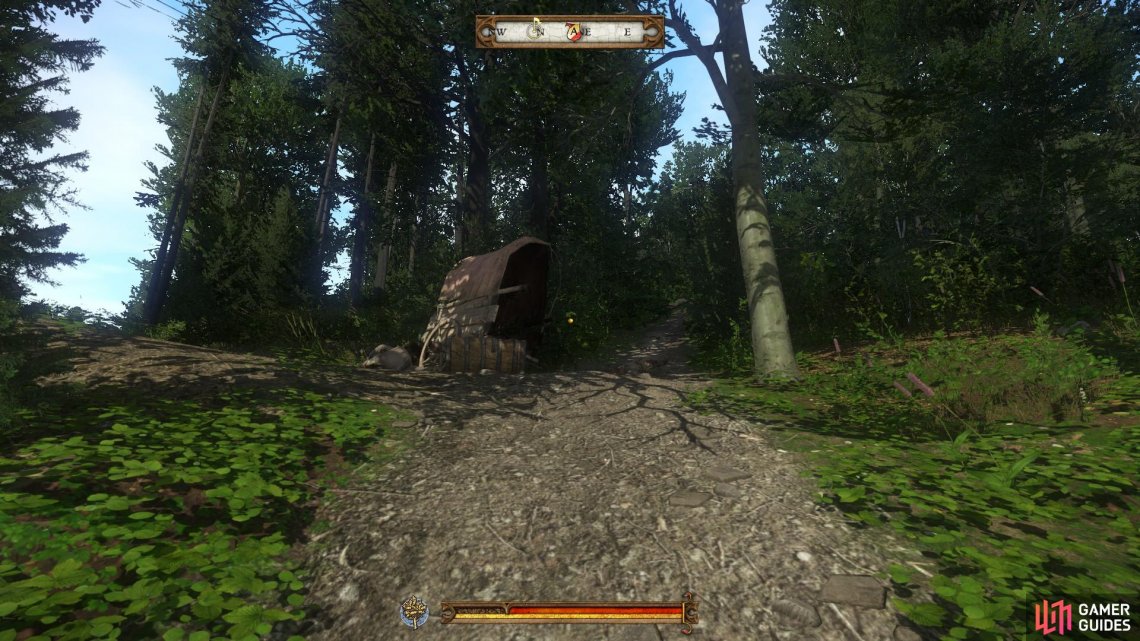 Go to the crossroads north of Rovna until you encounter an abandoned wagon.

Once you have inspected the wagon, follow the blood trail heading north west until it leads you to the camp of the charcoal-burners. Speak to one of the workers and they will refer you to Borya, their chief, you can tell you more. 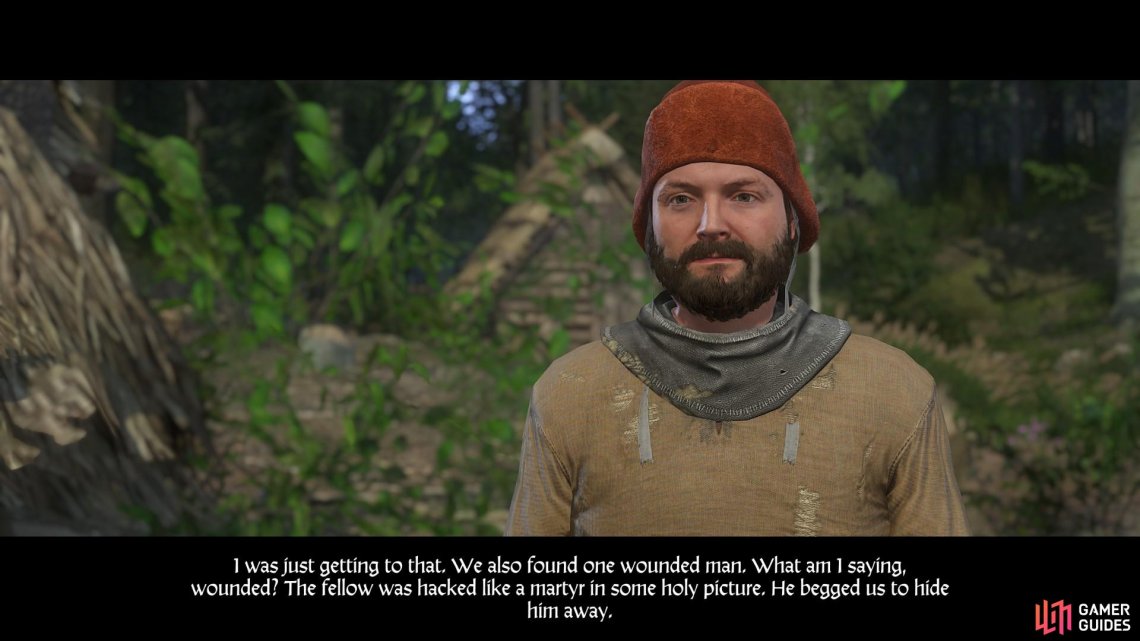 After some persuasion Borya will tell you that he is hiding a wounded man.

Borya will provide you with a key to the hut where the wounded man is hiding. Enter it and question him. 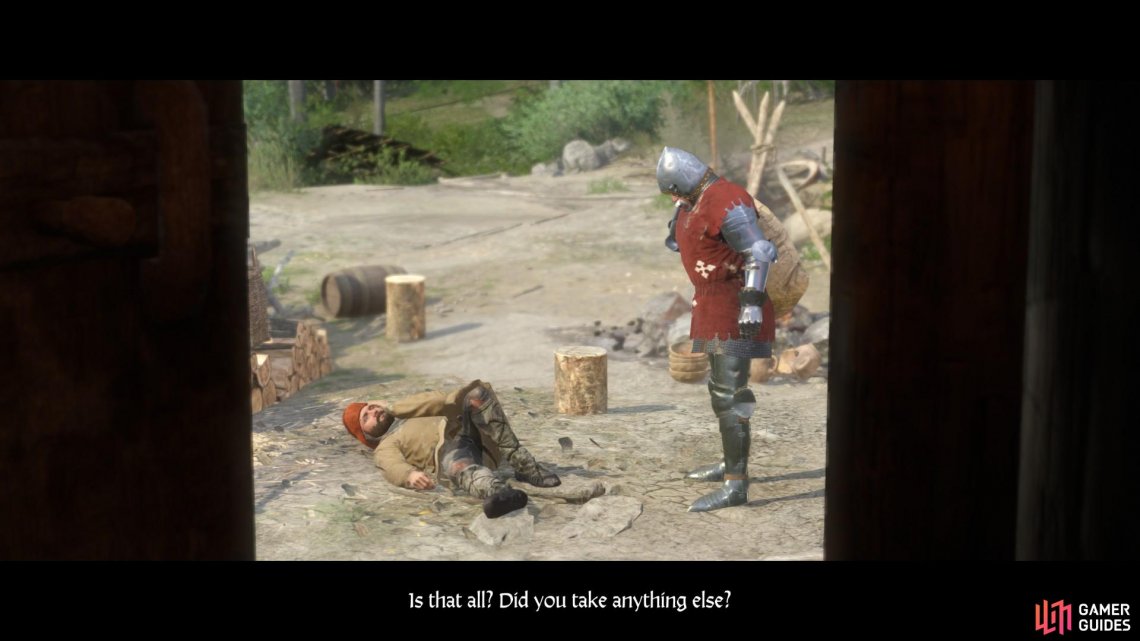 When you are done questioning the wounded mercenary a cut scene will follow in which the mysterious German knight shows up and takes a bag of coin.

You must now chase after the mysterious German knight. Mount your horse!

Note: You have a number of options when chasing the knight. If you feel confident in your ability to fight him, try to unmount him from his horse. Be cautious; he may look old, but he is skilled and experienced. Alternatively you can meet him at the Sasau inn later on. 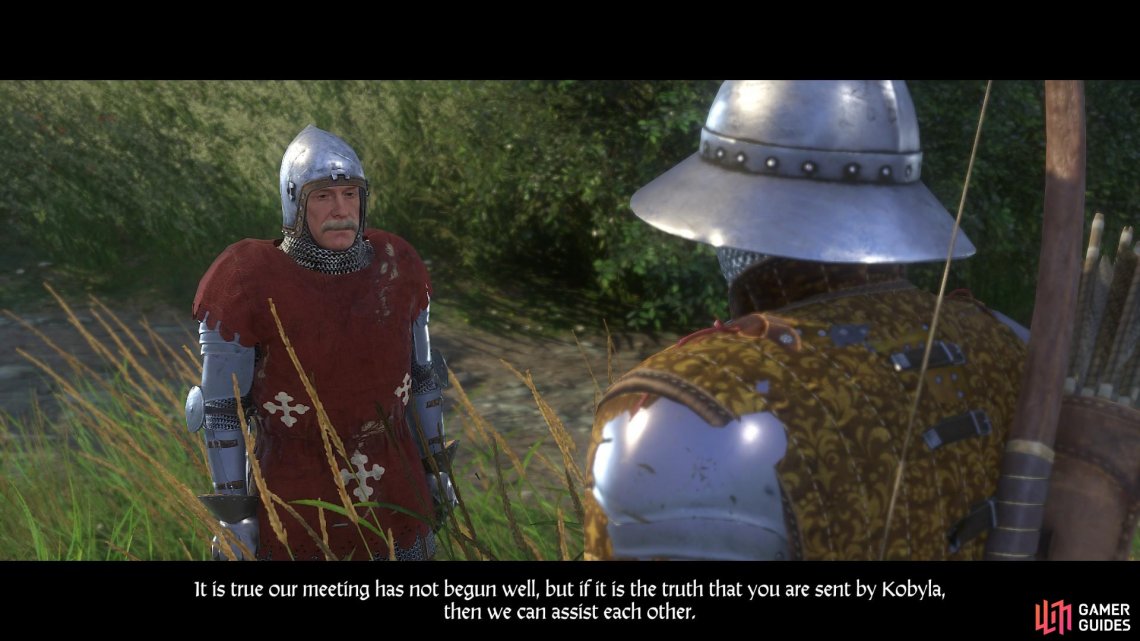 (1 of 2) Once you defeat him you will have earned his respect. Talk to him about the documents he holds and arrange to meet in Sasau at a later time. 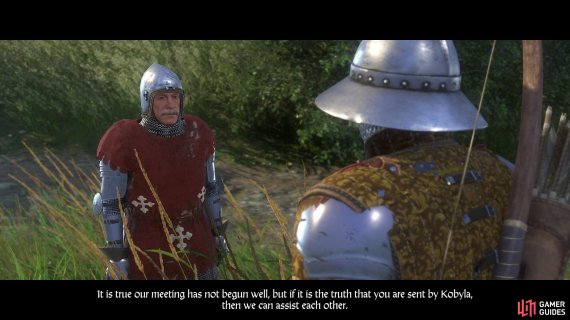 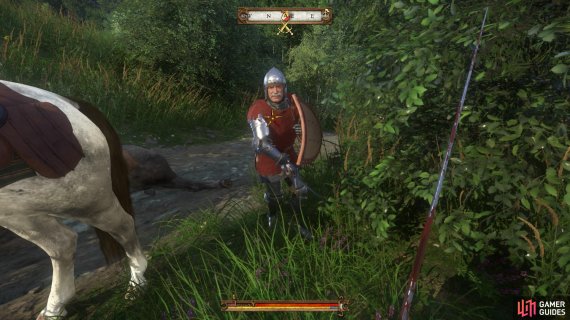 Once you defeat him you will have earned his respect. Talk to him about the documents he holds and arrange to meet in Sasau at a later time. (left), Defeating the knight in combat is by far the most entertaining option. (right)

Note: Ulrich also mentions that he buried Menhart north of the crossroads behind an abandoned cottage. You can go there to dig up his grave which contains a decorated sabre, a necklace and a silver ring.

The documents that Ulrich gave to you can be made sense of by Master Feyfar. Go to Rattay and ask him to look at them. 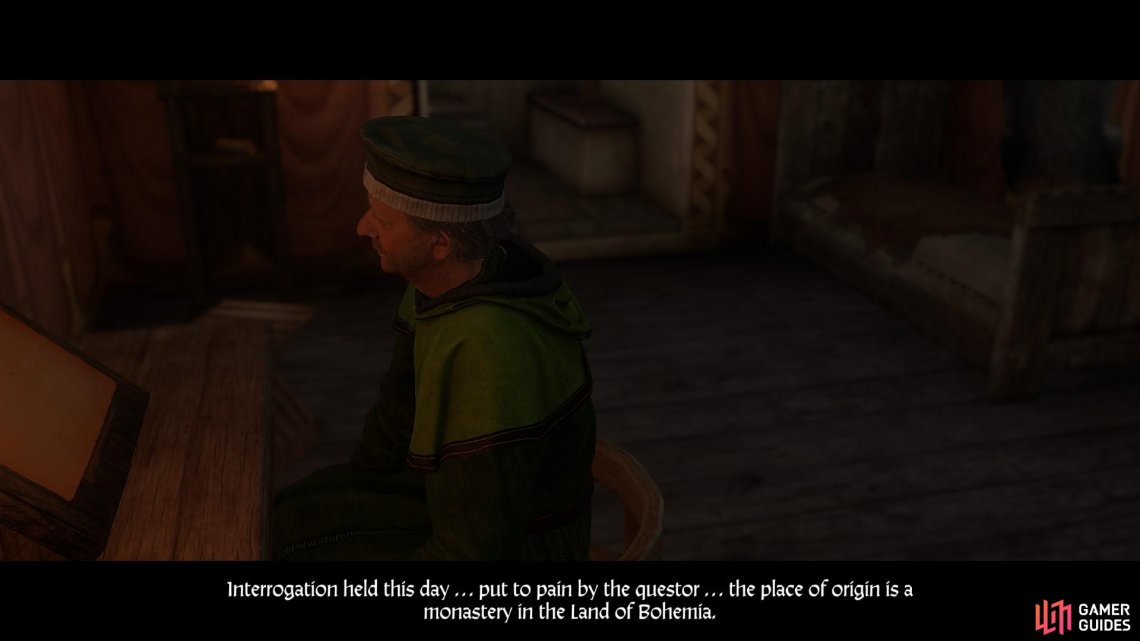 The documents confirm that the counterfeit coin is being produced somewhere in or near to Sasau.

You must now go to Sasau to investigate further. You have two leads to follow; find out where the counterfeiters get the quicksilver from, or find out who in Sasau works with copper. There is also the optional objective to speak with Ulrich, who can be found at the inn, but you can leave that for now. 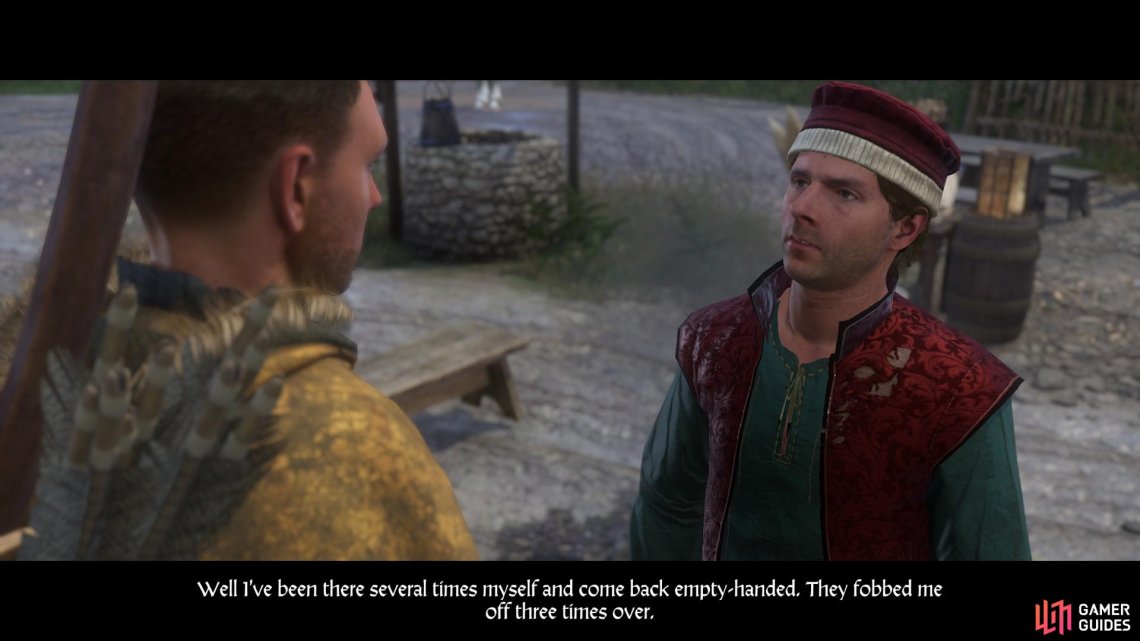 Go to the Sasau inn and speak with Master Fresco. After complaining about his difficulties in acquiring quicksilver for his work, he will suggest you speak with the Overseer by the monastery.

The overseer will not want to concern himself with the matter. Instead he asks you to speak with his assistant, who is known as the Overseer’s Hand and can be found roaming around the monastery grounds. 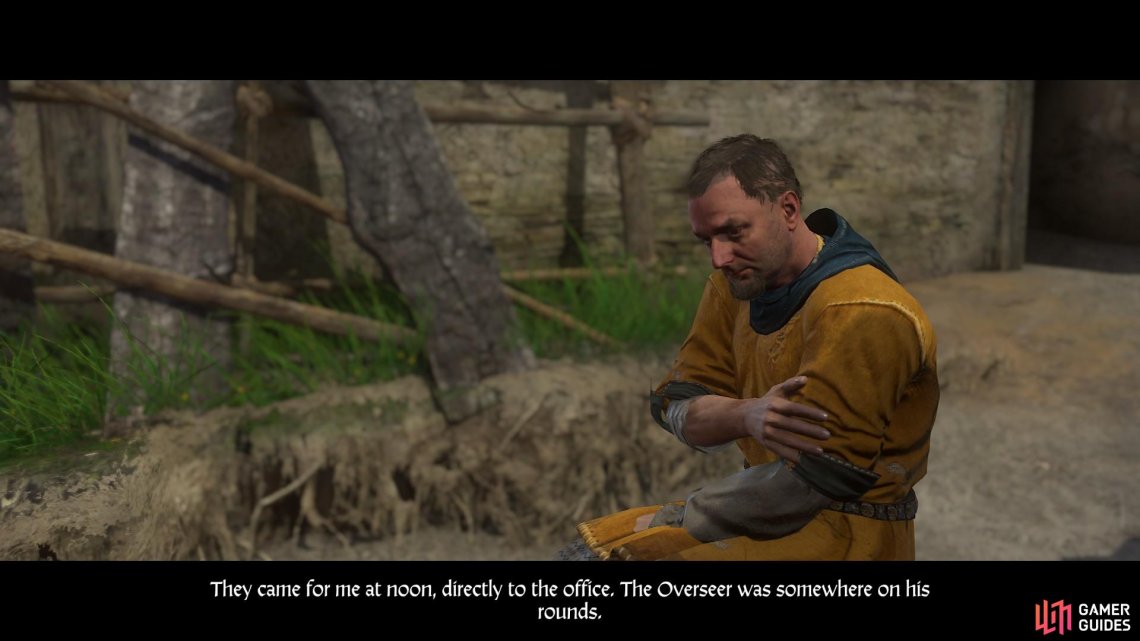 Speaking with the Overseer’s hand will reveal that he has been intimidated to hand over the quicksilver by a knight named Sir Jezhek and a man named Rapota.

The hand also mentioned a place in the hills above the monastery where the quicksilver is dropped off. You should speak with Ulrich and investigate it together. 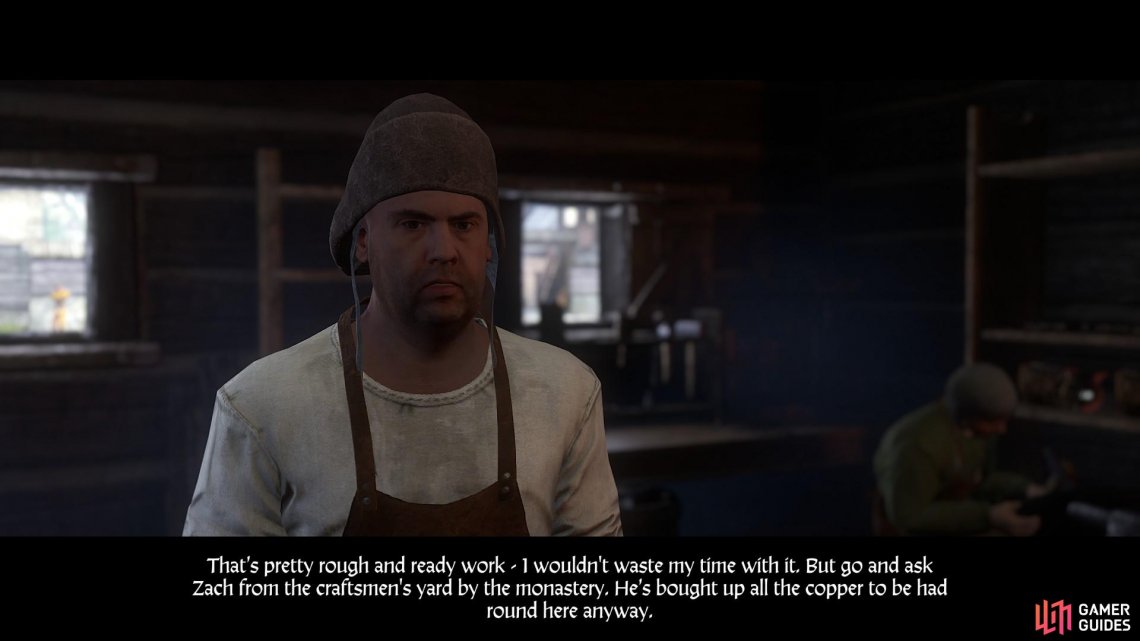 (1 of 2) Next, speak with Master Ota who can be found in the armourer shop. 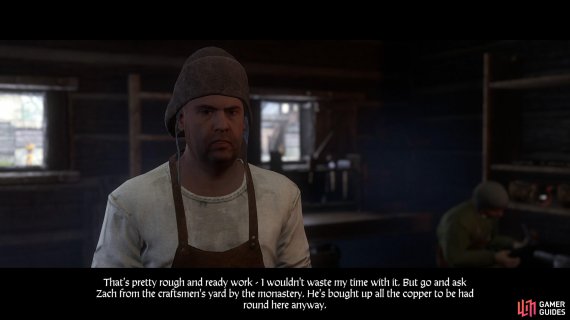 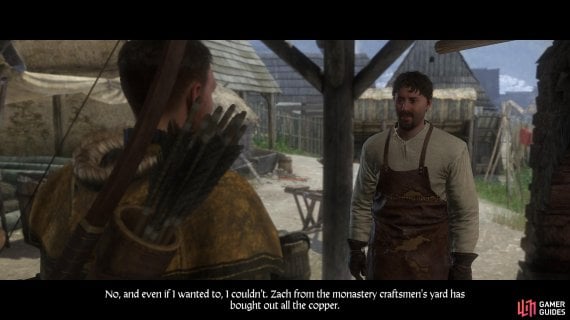 Next, speak with Master Ota who can be found in the armourer shop. (left), You should begin by speaking with Blacksmith Mikesh about the copper. (right)

Now that you have learned a bit more about Zach, go to him at the forge near the Monastery and enquire about the copper. 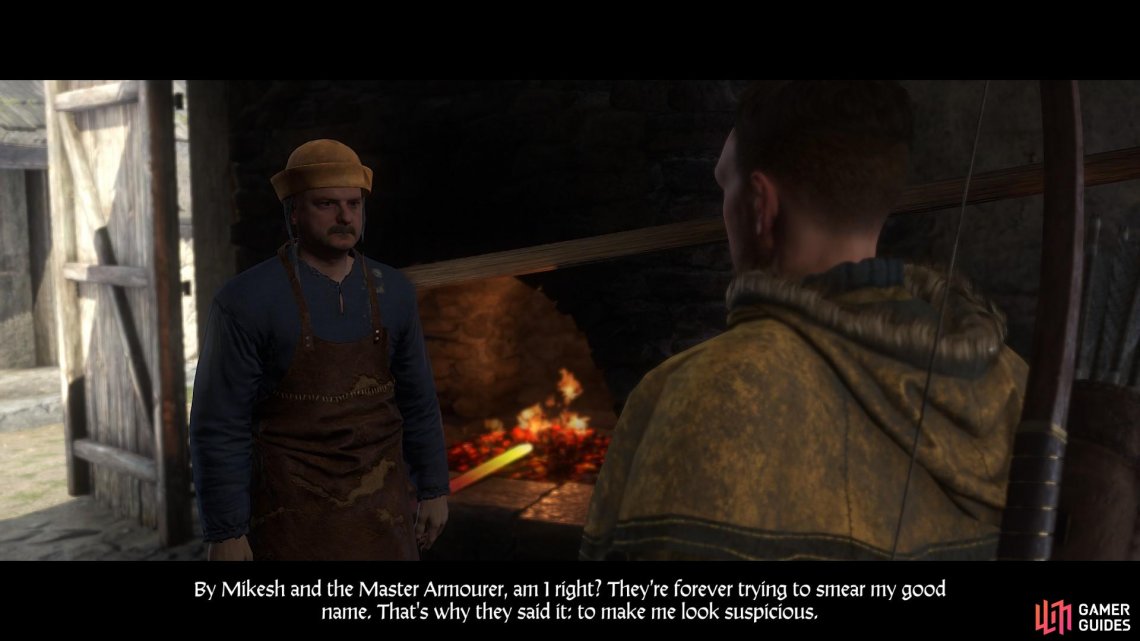 (1 of 2) Zach will be reluctant to say anything, labelling Ota and Mikesh as liars. 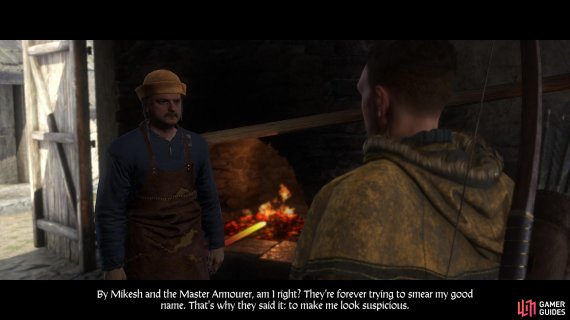 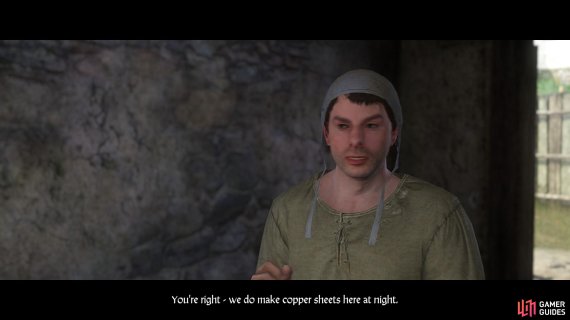 Zach will be reluctant to say anything, labelling Ota and Mikesh as liars. (left), His son, on the other hand, is susceptible to some persuasion. Exhaust the dialogue options to get the truth out of him. (right)

Once you have persuaded Zach to tell you everything, go to Master Feyfar in the Sasau scribe’s house. Tell him all that you have discovered and he will suggest that you speak to Master Jerome. He is not of much interest, but his apprentice Florian is. 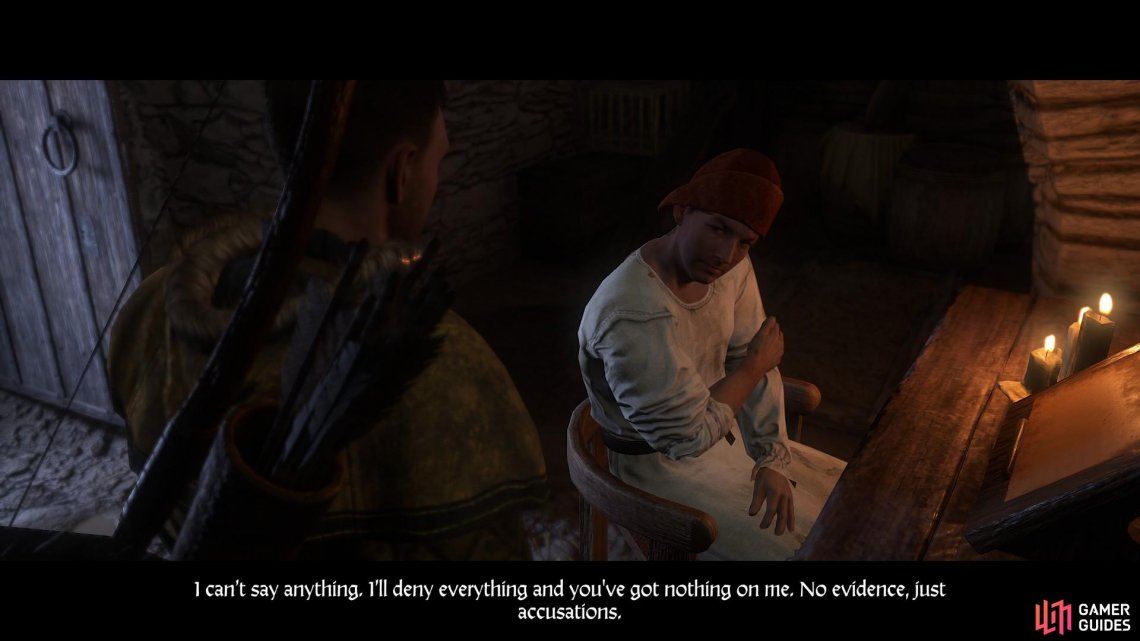 Florian has one interest; to save his beloved Esther. He is unwilling to say anything unless you save her first. Alternatively you can persuade him to agree that you will find Rapota in Sasau before he finds out.

As you leave the store house beneath the Grocer, look to your left and you should see Rapota walking briskly. When you speak to him he will be evasive at every turn before eventually deciding to flee. Chase after him and tackle him into submission so that you can question him properly. It turns out that the counterfeit coin is being produced in a mine shaft in the Skalitz hills. Enlist the help of Ulrich if you want it and make your way there. 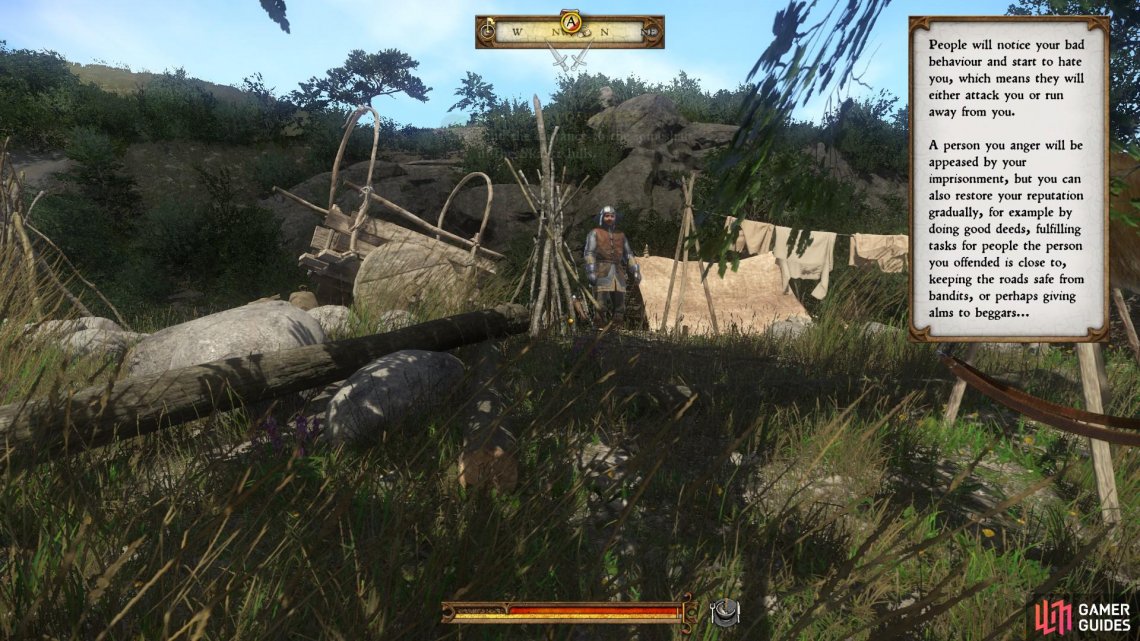 At the entrance to the mine shaft you will find that there are bandits waiting outside.

Deal with the bandits and enter the mine shaft. 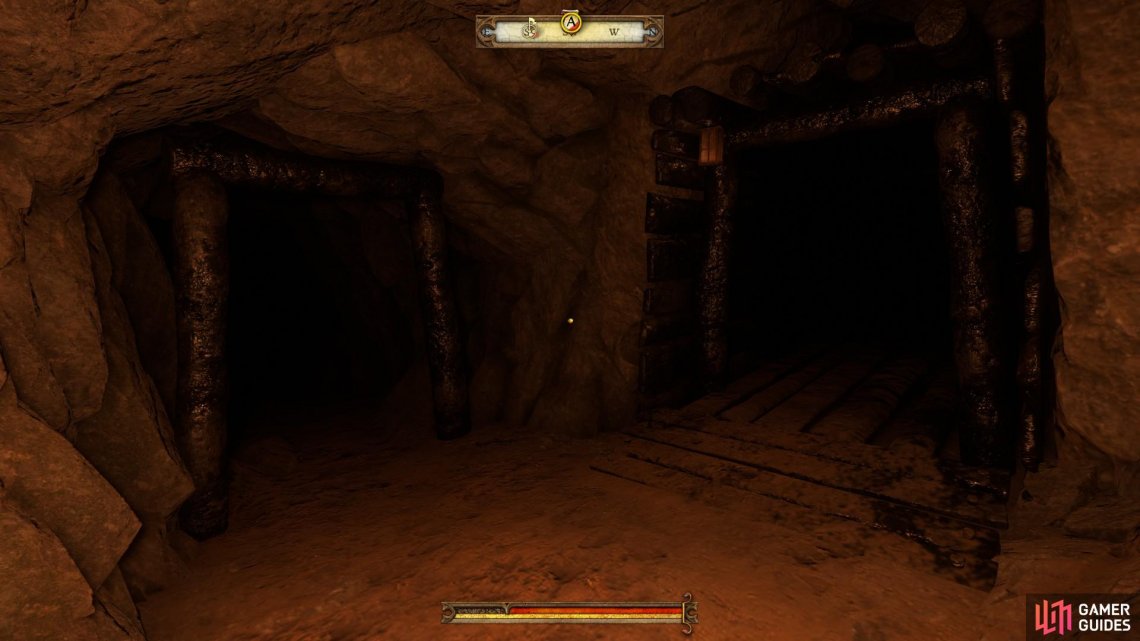 When you enter a fork in the tunnels, turn right and continue following until a cut scene initiates. 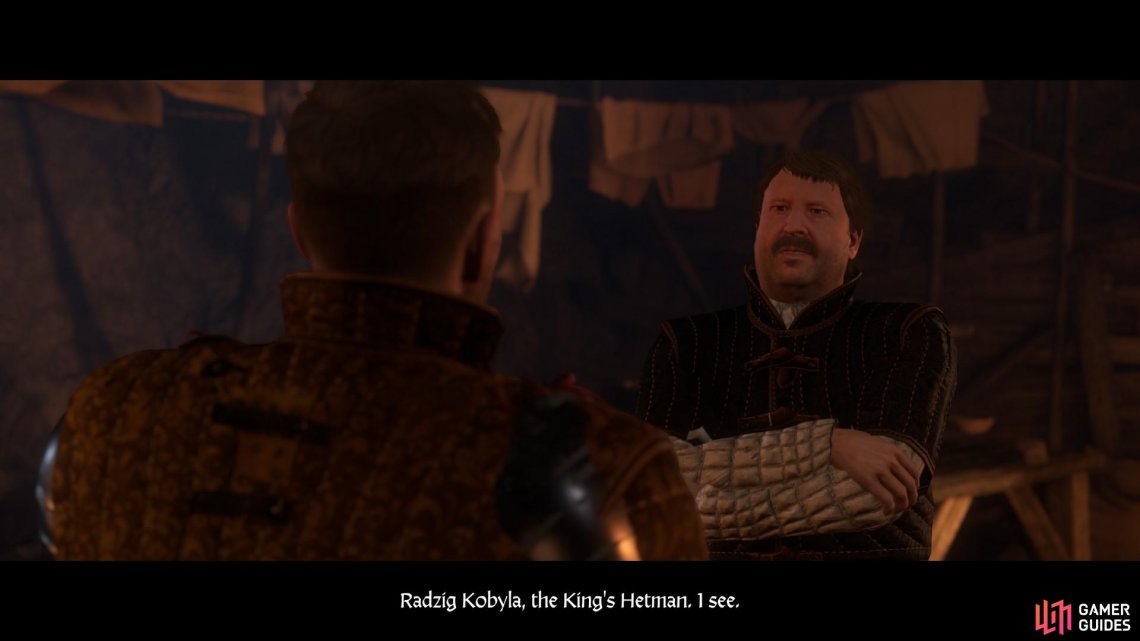 (1 of 2) During the cut scene you will encounter Sir Jezhek. You have two options; persuade him to come with you quietly or force him with a fight. 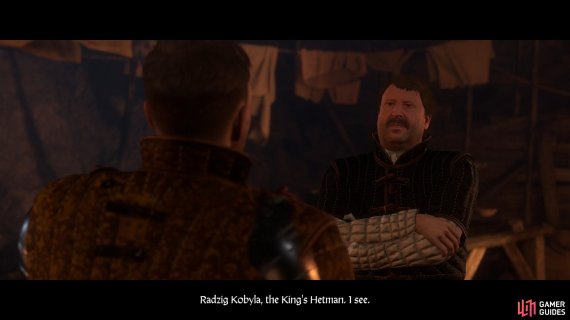 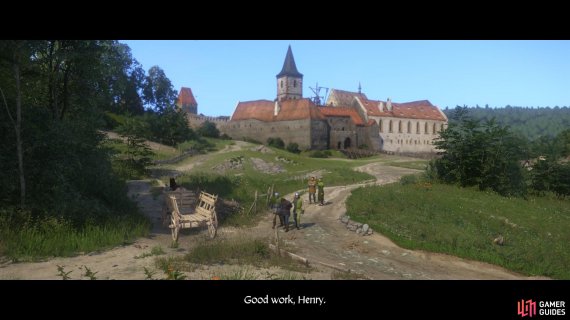 During the cut scene you will encounter Sir Jezhek. You have two options; persuade him to come with you quietly or force him with a fight. (left), With Sir Jezhek in chains, it is time to return to Sir Radzig. (right)

Upon you return Sir Radzig will ask you to interrogate Sir Jezhek. To do this you will first need the keys to his jail cell from Captain Bernard. Once you have the keys go to the jail house and speak with Sir Jezhek. 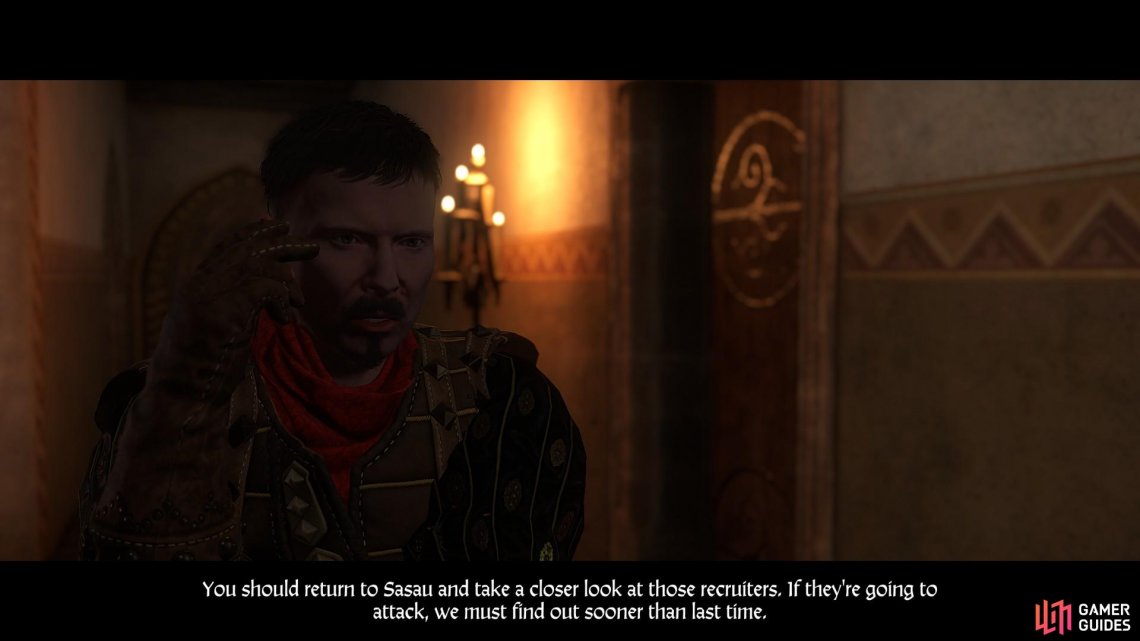 Once you have learned all that you can from Sir Jezhek, report back to Sir Radzig for further instruction.