Well, Lindblum has been attacked and things aren't looking so hot. Head north before getting a minor distraction, then continue to the next screen. There's nothing to do here, so keep going until you meet up with Minister Artania. You meet up with Cid, Dagger's uncle, who mentions that Kuja is the man behind supplying Brahne weapons. However, he is likely from the Outer Continent and all normal means are out of the question, so you have to find another way to get there. To help you prepare for your journey, Cid will hand over 3,000 Gil.

The man by the fountain will be your way out of the city, but let's prepare some before leaving, as he warns you to do. The lady by the item shop still sells some things, so stock up on anything you might need. The equipment shop doesn't really sell anything new, but the synthesis shop does have a few things you might want. The Exploda for Zidane is a new weapon for him, requiring a Mage Masher and Mythril Dagger, while the Barette will help teach Dagger the Cura spell. If you mistakenly left the Power Belt on Steiner, you can forge another one here. 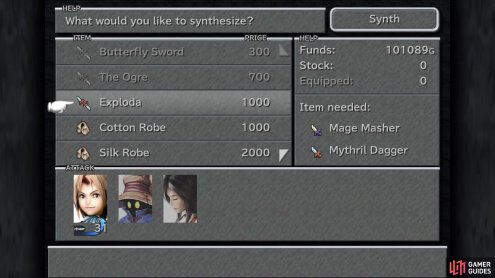 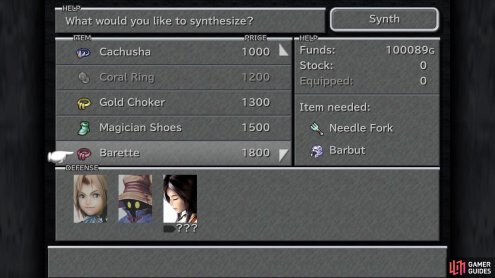 This leaves quite a few options for Dagger at this point, especially in the Add-On slot. The Peridot item you just got will teach her the Ramuh eidolon, but survivability is more important, so get her to learn Cura before that. She should also have access to the Ability Up skill, so that's something you want to learn as soon as possible.

Before leaving Lindblum, let's take a look around the place to get some random goodies. Exit to the south of the market area to see an ATE prompt pop up, so view The Third Jewel. After that's over, enter the house on this screen to find two chests in the one corner, which contain a Phoenix Pinion and an Ether. Exit and look among the rubble where the alley was to find a Lindblum Card. It's time to check the only other district available, but make a pit stop by the inn to drop off a letter to Moodon, as well as pick up another for Zidane (from Ruby) and even a letter for Moonte.

That's all you can do here in the Business District, so take an air cab to the Theater District. Head into the artist's place and loot the Ore from the chest, then go to the next screen, where Tantalus' hideout is located. Lowell will be near the bottom of the screen, so speak to him to have him run off to Alexandria, then enter the hideout. There will be three chests here, holding 340 Gil, 993 Gil and 262 Gil. Return to the Business District and tell the man by the fountain you are ready to go. This will trigger an ATE, called Brahne's Fleet Arrives, to play on its own. 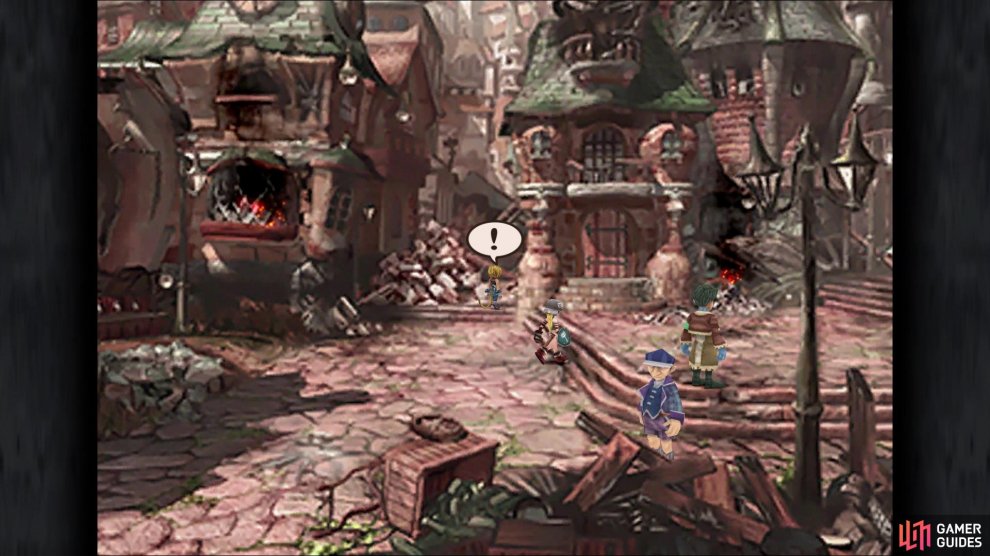 This will lead into a scene with Zidane and Dagger reaching the base level, where they meet up with Vivi and Cid, who'll hand Zidane a World Map. Another ATE takes place here, ** How infuriating!**, then you'll be at Dragon's Gate. Hand over the one letter to Moonte, then look in the right corner, near the door, for a Bandana. That wraps up the little bit of Lindblum you could explore and it's time to move onto the next bit, but before you do, you want to make sure you are prepared.

If you haven't dug up all of the Chocographs, go ahead and do that now. When you're finished and ready, enter Qu's Marsh and head to the pond, where you will find Quina once again. S/he will rejoin you, so enter Quale's place and speak to Quina's master to learn some hints on the location of the excavation site. Exit the house and go to the screen to the right of Quale's place for a scene, leading you to the entrance of the site, called Fossil Roo.