Tetra Master is the name of the card game in Final Fantasy IX and while it may draw similarities to Triple Triad from Final Fantasy VIII, it ends in just being a mini-game. Apart from one section of the storyline, Tetra Master has no real importance and unlike with Triple Triad, you can't really do anything with the cards, as they cannot be turned into items and you won't get any items from playing the game itself. Basically, the mini-game is just there to provide a distraction from the main story, without any real benefits to it.

You can get a brief explanation on how to play the game from Alleyway Jack, during your first time in Alexandria. After Puck steals the ladder at the beginning of the game, while controlling Vivi, Jack will walk into the alley if you wait and don't chase after Puck. Speaking to him here will have him bring you back to the pub, where he'll give you a few beginner tips on how to play the mini-game. The only problem is that he doesn't dive into the specifics much, like the meaning of the numbers themselves on the cards. 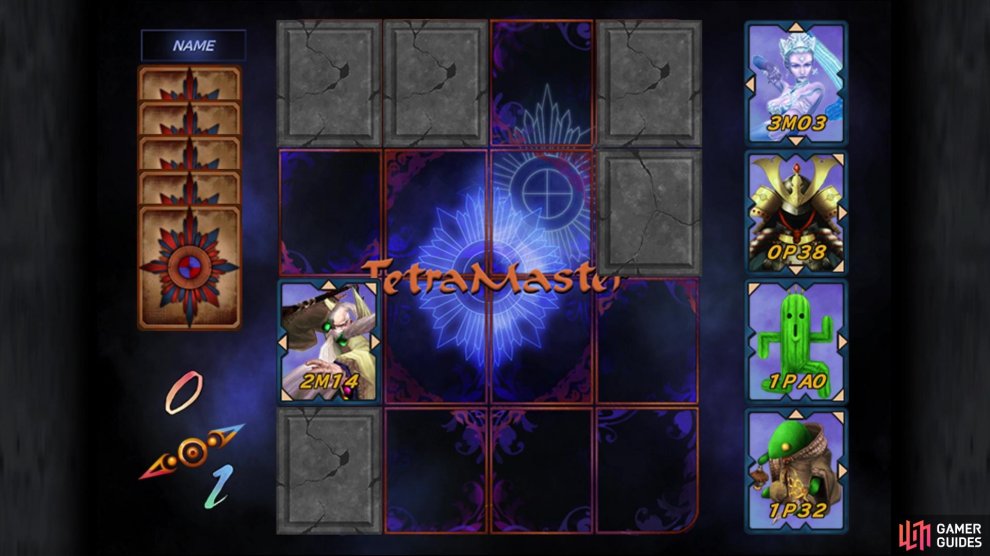 Note: You can only carry as many as 100 total cards in your inventory at all times. This is important, as there are 100 different cards in the game, so you will only be able to carry one of each if you're looking to collect them all.

So, as you run around the various towns and other places in the world of FFIX, you will sometimes walk up to a NPC and see a card icon next to the interact one. Press the Square/X (Xbox)/Y (Switch) to begin a card game with that NPC. Note that you need five cards in order to play, so if you don't have that, then you won't be able to play the mini-game (this should only affect the very beginning of the game). Once you choose to play a NPC, then you will have to choose five cards from your entire deck. It is then that the game will begin, which takes place on a 4x4 board that sometimes have blocks taken up by pieces on which you can't place your cards.

At the beginning, there will be a coin flip, where orange makes the opponent go first and blue makes you go first. The objective will be to have more cards in your possession by the end of the game, which will be at least six. The winner of the game will take one of the cards from the other's hand that was in their possession at the end of the game. Should you or the NPC control all cards at the end, then that is considered a Perfect and all the opposing cards will be taken. If both players finish with an equal number of cards, that will be considered a draw. Should you happen to lose a card to a NPC, you can trigger a rematch and try to win it back, as they will typically use the card(s) you lost. If you lost with a Perfect, then those cards are lost.

Now that you know the general outline of how to play, let's dive into the individual aspects of the cards, starting with the arrows. As you will see, each card will have random arrows on it, which signifies the direction it will attack when placed on the board. If the arrow is pointing at an opponent's card that doesn't have an arrow on that side, then the enemy card will be automatically captured. Should the arrow point to an opponent's card that does have an arrow, then the two cards will do battle. Placing the cards on the board is one of the strategies you will need, although things get a bit more complicated once you factor in the stats.

In addition to the arrows, every single card in the game will have four stats on the face of the card, ranging from 0-9 and A-F, with F being the highest. Each value will correspond to a specific stat, depending on its placement. For example, the first value is the card's overall strength. The biggest problem with these values (and the reason why some people don't like Tetra Master) is that each one has a range that the value can be. Taking the previous example of the first value being 4, that means that the card's strength can range between 064 and 079, which means there's a bit of randomness to the overall game, as the game will take a random value from within that range.

As already mentioned, the first value on a card is its Strength, with the second value being its Battle Class. There are only four values here, signifying the stat it will use when doing battle with another card. Below are the four different classes that a card can fall under:

The last two values on a card are the physical and magical defense stat, respectively. It operates under the same principles as the strength stat, so it will take the same numerical ranges as that. 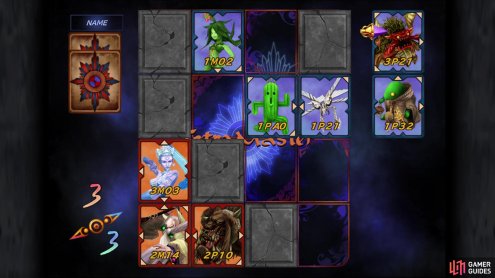 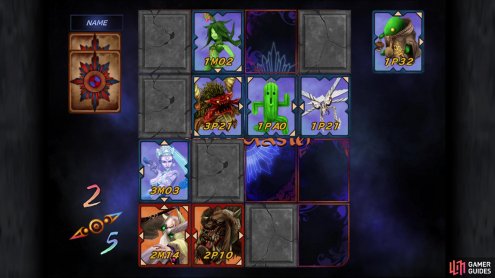 With some knowledge under your belt, it's time to finally play a match of Tetra Master. Pick whichever five cards you want at the beginning, with some general knowledge that the higher the stat, the better chance it has of defeating another card. It should be noted that due to how the battles actually play out between cards, it's possible that any card can win. It would take some pretty bad randomness for a F-strength card to lose, but it is possible. If you place a card against multiple opposing cards that have arrows facing yours, then you will get to choose which card you battle.

Let's dive into how the stats and everything come into play now with battles. As mentioned already, placing a card that has an arrow pointing to a side of another card without an arrow will make the card played automatically capture it. When they have arrows facing each other, the cards will do battle. The cards' strength, class and defense will all come into play. First, you take the attacker's strength value and look at the ranges in the table above, where you'll get a random number in that range. As an example, let's take two cards with the following stats: 4P10 (attacker) and 2M01 (defender).

Let's say it picks 058 for the attacker and 001 for the defender. Take the differences between the two random numbers for each set and you're left with 10 for the attacker and 13 for the defender. Since the difference is larger for the defender, that card would win the battle, even though it's clear the other card had a huge advantage from the beginning. That means the randomness involved with Tetra Master can make a weak card possibly win against one of the strongest cards. Note that all of these values are completely hidden, so you never really know what's going on under the hood.

There is one more thing to talk about with battles, which is combos. Basically, if the losing card in a battle has arrows pointing to any adjacent cards that belong to the other person, they will lose those cards in a combo. So, depending on the positioning of the cards on the board, it can be possible to lose the match just because a card you placed earlier in the match gets taken from a combo. 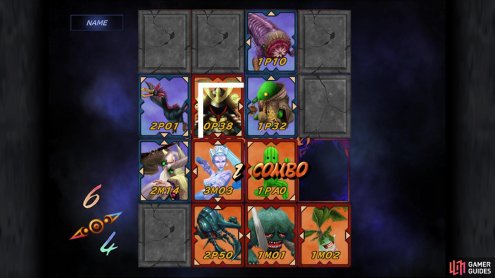 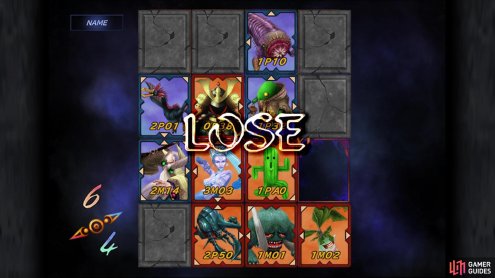 Now that you have an understanding of how the randomness works in Tetra Master, let's go over some tips and tricks to help maximize your chances of winning. Since you won't know where the blocks are located on the board until you pick your cards, so you can't play around the board. However, you will want to be careful with picking cards that have a lot of arrows. While it may seem like a good idea, since you can pick battles anywhere, you have to worry about getting comboed by the NPCs you're battling. Thus, it might be better to pick some cards that have limited arrows on them to avoid this.

Likewise, you can use weak cards with a lot of arrows to your advantage in setting up combos. Baiting the computer to take these cards can become an advantage in using combos to take them all back in the long run. Concerning the blocks, you can use them to your advantage, by placing cards so they are harder to take control of by your opponent. One more trick to taking advantage and not losing cards is that the game autosaves on screen transitions, so if you happen to lose a card and want it back without having to battle for it, you can simply reload your game.