Located throughout the world are little areas called Qu's Marshes, where you will first meet up with a party member named Quina. Once you have access to him/her, you will be able to go to the area with all of the frogs and have the option to catch some. As you catch frogs, you will reach certain thresholds, where Quina's master, Quale, will come out and hand you rewards. To catch a frog, you simply run up to it when it's on land you can walk on and mash on the X (PS)/A (Xbox)/B (Switch) button. That's the basics of it and while you can go crazy with catching the frogs, you will have a little trouble with them respawning.

Note: You will only be given the option to catch frogs if Quina is in your immediate party, so if s/he isn't, then you won't be able to participate in this minigame.

There are three types of frogs in the game: a male frog, a female frog, and a golden frog. The golden frog is special and will be talked about in a little bit, so let's concentrate on the other two. It might be a little difficult to tell the difference between a male and female frog, but there is a color difference between them. Female frogs have some red on them, while the male ones don't. Upon catching the frogs, you will want to leave a single male and female left, as they will reproduce and make the respawn much quicker. This can be sped up even more by leaving the rare frog, the golden one, also there, if it has spawned. Amongst all four marshes, you can only ever have a single golden frog. 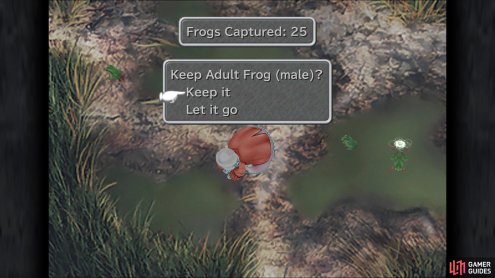 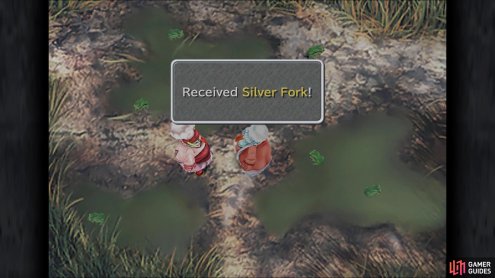 Upon leaving and revisiting at a later time, you might see some tadpoles and baby frogs. While the baby frogs aren't given genders, they can be caught and count towards the overall counter. Tadpoles cannot be caught at all, so you should ignore them. What determines the frogs respawning and growing is time spent outside of the marsh, with each one having their own timers. This can take a while, so try not to visit the ponds too often, as that can actually limit the growth/return of the frogs. The following table are the rewards given by Quale and the number of frogs needed. Note that after catching 99 frogs, you will be forced into a fight with Quale, who is definitely a very challenging boss, so keep that in mind.

There's a total of four Qu's Marshes in the game's world, and you will be able to gain access to all of them on Disc 3. They are easy to spot, as the surrounding land will be marsh (a darker green color), plus it'll look like a little forest-like structure is popping out of the ground. The layout for each of the marshes will be different, along with the enemies encountered, although you can usually just find the path on the screen with the moogles that'll lead you to the pond (go straight in the weeds).

The first location is just outside of Lindblum, on the way to Gizamaluke's Grotto. It is here that you recruit Quina to your party. The second location is on the Outer Continent, south of the Black Mage Village. The last two locations are on the Forgotten Continent, with the first one being on one of the islands. You will be able to access it once you have the Blue Narciss ship or a Chocobo that can cross shallow waters/the ocean. For the final location, it'll be on the mainland of the Forgotten Continent and can only be accessed via the air (so, airship or flying Chocobo), although you can visit it whenever you have access to that continent during the story.