After a brief introduction to the history of Gargan Roo, you will be in control and able to explore. Immediately to your south is a moogle, named Mochos, so hand him the letter from Nazna. Take this time to also make sure all of your equipment and abilities are up to date, including Marcus. To begin, take the exit in the bottom left and open the two chests there for a Chain Plate and Phoenix Down. There is also a lever by the one chest, so pull it and return to the original room.

Tip: Gargan Roo is a nice place to level up your party for right now, as they might be a bit underleveled compared to Zidane and the others. Level 12-13 is a good place to stop. 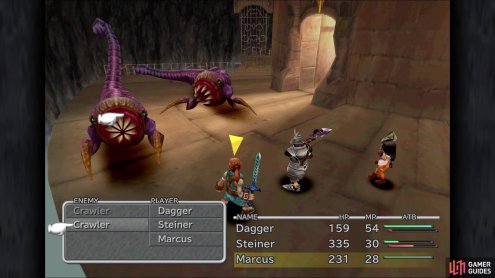 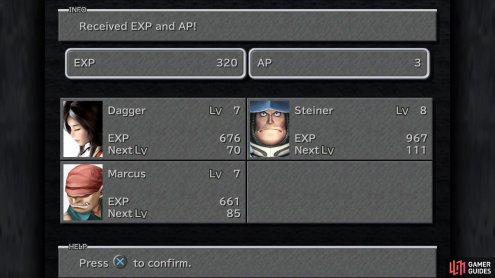 Note: Marcus is a special guest character, as his level will directly influence the stats of a character you receive later in the game. Normally, it's just the level that carries over, but in this special case, it's the stats. So, you could potentially have a very strong character if you level up Marcus a bit.

Take the bottom right path this time, then go north and pull the lever, like Tot asks you to do. This will cause the gargant to start moving along the line, which is a giant insect that pulls along a trolley. Return to the previous screen and venture to the left of the entrance, where there is a lever that had "Feed" written above it. This will stop the gargant, allowing you to get on the trolley. While the gargant is moving along, it will stop and you will be thrown into a boss fight.

This is a relatively simple boss fight, with the only real complications coming from the ailments it can inflict on your party. Devil's Kiss can inflict Poison, but both Dagger and Steiner should have Antibody equipped, so they will be unaffected. The problem with that, though, is that Marcus can't equip abilities, so he's susceptible to it. String is another attack from the boss, which will inflict Slow on a character. Lastly, Ralvu can also use Blizzara on a single ally, dealing around 110+ damage.

One of the first things you should do in this fight is have Dagger use Blind on the boss until it sticks. This will cause Devil's Kiss, which seems to be the most used skill, to sometimes miss. From there, have Marcus spend each turn stealing, until you get both the Bone Wrist and the Mythril Fork. Steiner can pretty much do whatever he wants, but he will probably be attack, although make sure you get both items before you deplete the boss' health to zero. 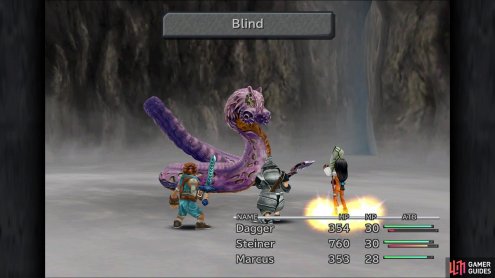 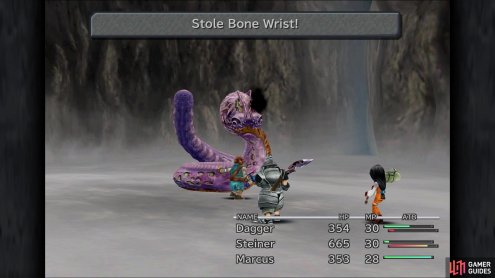 Once the boss battle is over, you will finally arrive back in Alexandria. As the three make their way to go see Brahne, they are captured and the game will turn over to Zidane and the others, who are back recovering in Burmecia.