Zidane and Blank will have a little conversation inside of the castle, as they place the armor on they stole from the now unconscious guards. Upon regaining control of Zidane inside of the castle, the only way to really go is up the stairs, where you'll bump into someone. It doesn't matter which option you choose her, as things will play out the same and lead to more scenes. You'll be introduced to a new character you can name here, who will be called Steiner throughout the guide. You will also be controlling him for a little bit, starting at the bottom of the stairs from before with Zidane.

When you have control, head back upstairs and out onto the balcony with Queen Brahne. Speak to her and you'll get your reward from the sword fight mini-game with Blank, which should be a Moonstone for impressing 100 nobles. At this point, you can continue with the story, but there is a way to get a free Elixir, provided to find the rest of the Pluto Knights. 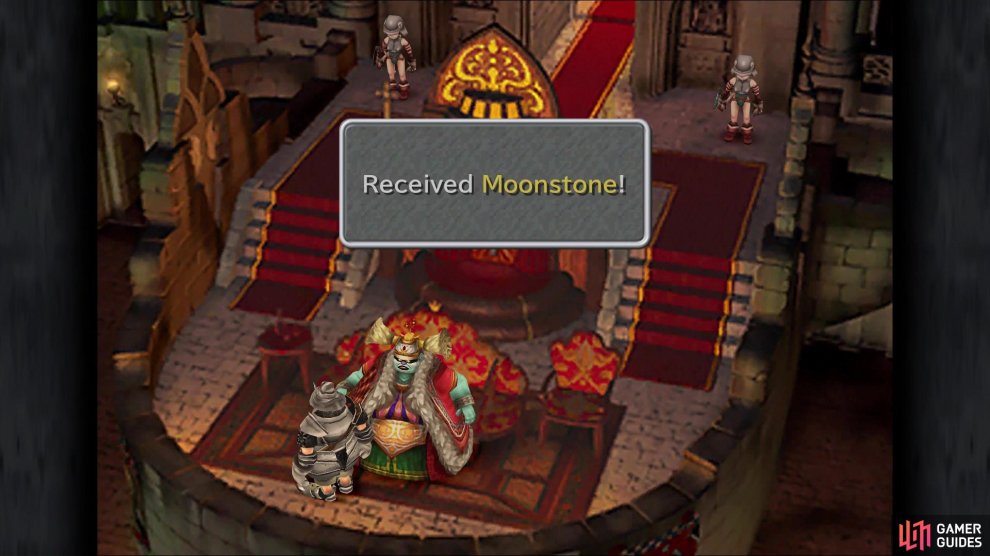 The Pluto Knights are scattered around the castle and if you want that sweet Elixir, you'll have to find and speak to all eight of them. To begin, head back into the room where you first saw Zidane in the castle. This is to the right at the bottom of the stairs that lead to Queen Brahne. Enter this room to find Blutzen and Kohel, so speak to them to have them run off, then feel free to save your game with the moogle. If you check Mognet, you will be able to read a letter from Kupo to Mosh, which required you to have 50+ jumps in the jump rope mini-game. Note that there's a Phoenix Down in the bottom left corner of the room, by the foot of the bed.

When you're done there, exit back to the previous room and head north, which will put you in a large room with some stairs on the northern end. The most troublesome Knight of Pluto will be here in this room, as he'll come out of one of the exits up top, then run around and generally avoid you. The best way to get close enough to speak to him is by sticking next to the right exit on the second floor, then wait for him to descend the stairs on the left side. By staying still, he will run from the exit to the stairs and back, so wait for him to start running north and that'll be your chance to meet him on the stairs. Speak to Dojebon, then take the exit on the right side up top to find Mullenkedheim in what looks like the dining hall.

Return to the previous room and head downstairs, opting to enter the room on the left side. This will be the library and you'll find Laudo in the lower left corner. Tell him he can't leave, then double back to the main hall. Exit to the south this time and continue south until you are in the courtyard with a fountain, with Steiner talking to himself as you approach the stairs. The next knight, Haagen will be south of the fountain, by the water's edge. Continue to the left and you'll find Weimar speaking with one of the Alexandrian Soldiers.

Enter the doorway right next to you and head straight to the back of the long hallway to arrive in a tower. As you run up the stairs, you'll pass the final knight, Breireicht. Speak to him once, then keep talking until he eventually gives you the Elixir for finding all eight of the Pluto Knights (he'll mention each one). Keep going up the stairs of the tower and once you reach the top, go outside to have the game take over at this point. 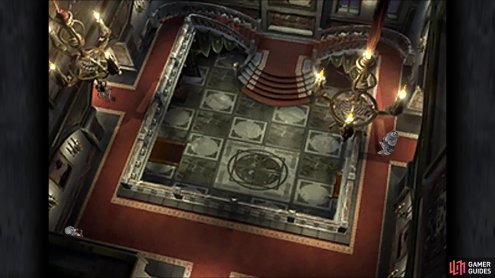 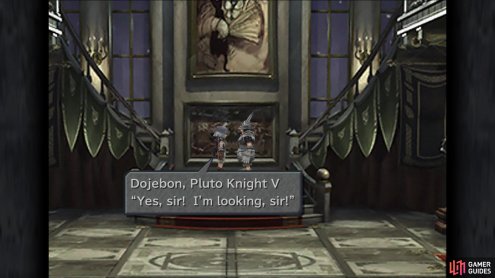 The scenes will eventually bring you back aboard the Prima Vista, where Princess Garnet will run off to the inside. If you haven't equipped the Mage Masher from the Masked Man yet, do so now. Also, the Moonstone you should have obtained from the sword fighting mini-game has a skill called Beast Killer on it, so equip that on Zidane too. Before we move along with the story, let's take a quick detour and talk about the abilities in Final Fantasy IX. Unlike a lot of RPGs, in which characters level up and gain new abilities, all of the actions that characters in this game will get are learned via equipment.

As you fight random battles and bosses, you will gain Ability Points (AP) that go towards the abilities on the equipment. Naturally, not every character will be able to learn every skill, as each one is usually specific to a certain character. For example, Flee on the Mage Masher for Zidane can only be learned by him, so no one else can get it. The characters will have access to a skill when they have the equipment on, but unless the skill is mastered, then they lose it upon taking it off. Equipping multiple items with the same ability will hasten the learning of it.

With that out of the way, enter the room along the bottom of the ship and speak to Ruby, then chase the Princess downstairs. Some scenes will follow and you will eventually end up in the engine room. Upon regaining control, fiddle with the valve just above you, turning the wheel to the left first, then to the right. This will cause two items to fall in the room, on to the right of you, and the second behind the engine. Head down the stairs nearby and grab both items, netting yourself a Phoenix Down and Phoenix Pinion. Exit to the left to bump into Steiner, throwing you into a battle with him.

This isn't really a battle, as all Steiner does is attack normally, so don't worry about wasting any Potions or anything. Instead, focus solely on stealing the two items he has, which are a Leather Hat and Silk Shirt, then proceed to smack him until the battle ends. Some more scenes will follow and you'll eventually be forced into another battle with Steiner, this time with two of the knights. However, not only will you have Zidane and Marcus with you, but Garnet and Vivi as well. Garnet has access to White Magic and Summons, but the latter are too expensive to use right now, so forget those. On the flip side, Vivi is a Black Mage, although he only knows Fire right now. Note that pressing L1/LB/L will make a spell go from single target to all targets. 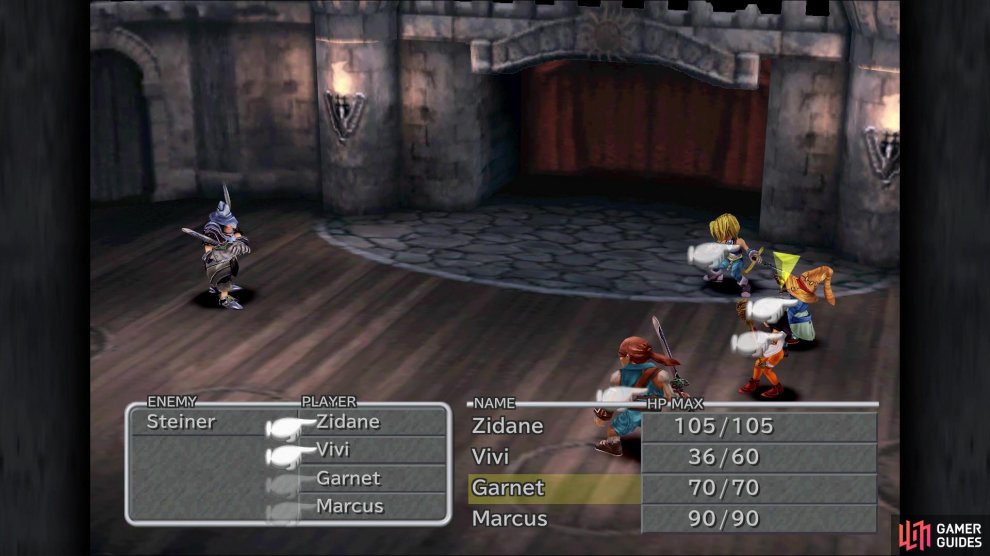 The second battle against Steiner isn't any more challenging than the first, as the two knights will go run away after a few hits, and Steiner will follow shortly after that. He doesn't do anything different than in the first battle. Of course, if someone's health gets too low, you can always use Garnet to heal them back to full health. There will be more scenes following this battle, then one final battle against Steiner will commence. This time, Steiner will be solo, but there will be a Bomb behind him. You can't target it, so just continually attack Steiner until the battle ends on its own.

The game will take over at this point, with the Bomb exploding on the Prima Vista, causing some havoc as it putters along, barely afloat. At some point, it will crash and land in the Evil Forest.