The Treno Auction House is a place you can bid on items in the city of Treno, although not all items are available at that point. Upon your first visit to Treno, you will be able to actually start bidding on the items for auction. Whenever you step into the place, the auctioneer will say the four items that will be for sale in that particular auction. If the item you want isn't there, then you can simply exit and re-enter to reset them all. As you progress through the main story, more items will be unlocked at the Auction House, so make sure you revisit whenever the opportunity arises.

To bid on an item, you simply need to speak with the auctioneer and input the value you wish to offer. However, the other participants might outbid you on the item, depending on the average selling price. The best way to ensure that you will win the item up for auction is to wait until the auctioneer says "Any more?" and then throw in your bid. Note that sometimes the other participants will continue to bid, but more often than not, you will win the item. 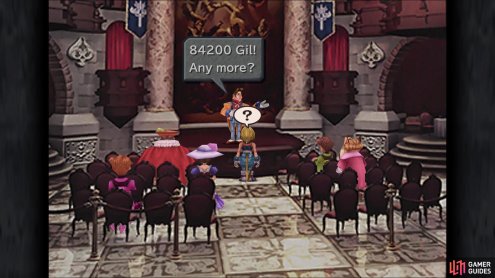 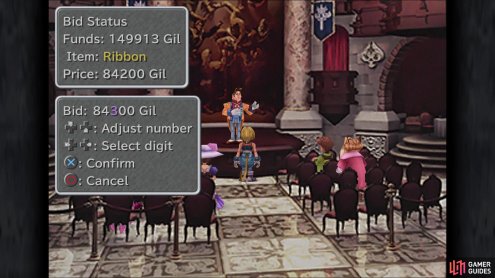 The following is a list of all the items that can be sold at the auction, although some of the better ones won't be available until after certain story events. There are specific items that will not show up in the auction if you possess one of them in your inventory, such as the four Key Items that can be sold to various NPCs in Treno. Also, some items will only be sold a single time, like the Reflect Ring.

Note: The winning bid column is an estimate, as the amount needed to win will change each time you bid on the item.

Whenever you first gain access to the auction house, you will see three items that pop up pretty much every time you refresh the four items for sale, which are the Griffin's Heart, Une's Mirror, and Doga's Artifact. These items, should you win them, can be sold to specific NPCs in Treno, at a slightly higher price than for you bought them. Once you return to Treno in Disc 3, you will find one more item like this, the Rat Tail. For three of the items, the first offer you get can be refused, with a second offer being higher; the only exception for this is the Doga's Artifact, so take the first price.

Doga's Artifact can be sold to a scholar inside of the synthesis shop, who is easy to find, as he's the only other NPC in there. For the Griffin's Heart and Rat Tail, they can be sold to the same NPC, the Adventurer in the Bishop House area, which is right outside of the synthesis shop; he's the NPC with the reddish-colored shirt and a hat. For the final item, the Une's Mirror, you will find the Nobleman in the same area as the Adventurer; he's a rotund with a red cape. Note that both the Nobleman and Adventurer will walk through the area, so if you don't see them, then exit and re-enter.

These can only be sold a single time to the NPCs, after which, they will be available in the auctions until you buy them again. Once you sell all of them, travel to Daguerreo and speak to the old man on the left side of the third floor on Disc 4, which is a part of the Excalibur side quest. Only after talking to that NPC and selling the above four items will the Magical Fingertip appear in the auction.