This is a walkthrough for the Yaren Story Triada Relic in Far Cry 6. Details on where to find all three relics.

Head to Oluwas Cave to begin this quest.

How To Start Triada Relic¶

To begin the Triada Relic Quest you’ll want to enter Oluwa’s Cave which is located east of Clara’s Camp. Upon accepting the quest you’ll need to find the following three relics.

Head to Dos Monjdas Mogote which is located in Lozania to find the Ida Triada Relic Treasure Hunt. Here you’ll want to use the grapple points to climb up. then follow the path up until you reach a cave entrance. Inside you’ll see a bunch of ziplines that you’ll want to jump between to reach the next part of the cave.

Head to Fort Oro which is located in the northwest corner of Cruz Del Salvador. Accept the quest, then enter the room on the right to find several mirrors. Here you’ll want to smash the first one next to the door to reveal a switch, then interact with it to open a door on the opposite side of the hallway. Read the Short Instructions on the table, then press the buttons on the center table in the following order:

Make your way upstairs and inspect the Note in Sheet Music Margins, then enter the now revealed secret room which contains a Dungeon Key. Now go back downstairs and unlock the final door, then head down into the basement. Shoot the boarded up door, then proceed into the room full of mannequin.

Interact with the red button at the back left of the room, then continue following the path around to find a grapple point that you’ll want to use to get up to the roof. Zipline down to the well, then use the grapple point above it to safely descend into. Finally, swing across to the ledge to acquire the Oku’s Triada Relic.

Head west of Mirador Cape to find Mckay Global Drill Sited D. Accept the Mimo Abosi’s Triada Relic, then turn off the generator before shooting the lock and entering the cave. Here you’ll want to go left to find a Fan Room Keycard on the floor next to a corpse, then take the right path and swim across to the next area.

Go into the room on the left and interact with the switch, then go through the door ahead and grapple down. Finally, follow the path and collect the Mimo Abosi’s Relic.

Return to Oluwa Cave and deliver the three relics, then open the chest ahead to collect the reward. Finally, use your new Supremo which will tag all the panthers, then defeat them quickly before reviving Oluso to bring this quest to a close. 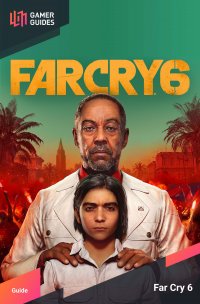 This guide for Far Cry 6 includes the following: