With the instruments acquired it’s now time to awaken the Wind Fish, to begin, head back into Mabe Village and enter the library to the west. Once you’ve entered you’ll want to interact with the book in the bottom right corner which will show you the path to take inside the egg.

There’s a chance that the path to take inside the egg is randomly generated, so make sure to take a screenshot of the directions that are given to you.

(1 of 2) Head to the library in Mabe Village to get your directions for the Wind Fish Egg,

Head to the library in Mabe Village to get your directions for the Wind Fish Egg, (left), then go to the egg and play Ballad of the Wind Fish in front of it to cause it to crack. (right)

After you’ve gotten your directions, teleport over to Mando’s Pond and head up the mountain to the egg, equip the Ocarina and play the Ballad of the Wind Fish in front of it to make the egg crack.

Before tackling the Wind Fish’s Egg you’ll want to make sure you have full hearts and fully stocked up on Magic Powder.

Move out of the way of the Zol when it attempts to jump on you, (left), then pour Magic Powder over it when it lands. (right)

Enter the egg and proceed forward, drop down into the darkness and go forward again, now follow the path that was given to you in the library and then drop down into another hole where you’ll face several bosses. First up will be the Giant Zol, In order to defeat this enemy you’ll need to move out of the way before he lands on your head then quickly pour some Magic Powder over him.

(1 of 2) Move out of the way of the white orbs before they hit you,

Move out of the way of the white orbs before they hit you, (left), then use your Sword to deflect the flames balls back at him. (right)

Upon defeating the Zol, the enemy will transform into Agahnim’s Shadow. To take him out you’ll need to stand opposite him and use your Sword to deflect his ball of flame back at him, but beware, he likes to change up his attack every now and then and throw four white orbs at you, quickly move out of the way before they hit you as they can deal a fair amount of damage.

Hit the Moldorms tail to kill it.

After Agahnim’s Shadow has been slain the enemy will transform again into Moldorm, luckily for you this is the one of the easier bosses you’ll face in the dungeon as all you’ll need to do to take it out is wait for him to slide past you and then smack the end of the tail with your Sword a few times.

Dodge the Ganons bats, (left), then go in for a spin attack when it throws his weapon at you. (right)

The Shadow of Ganon is arguably the most difficult boss in this dungeon as he doesn’t leave you very much room to maneuver around whilst spawning six flaming bats to try and kill you, dodge all the bats and wait for him to throw his spinning weapon at you then quickly sprint over to him and perform a spin attack, repeat this cycle until he has been slain.

Pour Magic Powder over the Lanmola to defeat it.

Next up is another easy boss, Lanmola’s Shadow, in order to take him out simply stand in any corner of the room and use your Magic Rod against him as he approaches you.

Hop over the Dethls arms, (left), then launch your boomerang into his eye when it opens. (right)

Dethl is the final boss you’ll face in this dungeon and all you’ll need to do to take him out is stand to the bottom of the room and hop over his arms, then use a Boomerang and launch it into his eye when it opens.

All that’s left to do now is take a walk up the stairs and watch the final cutscene. 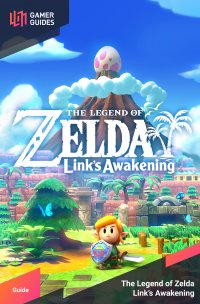