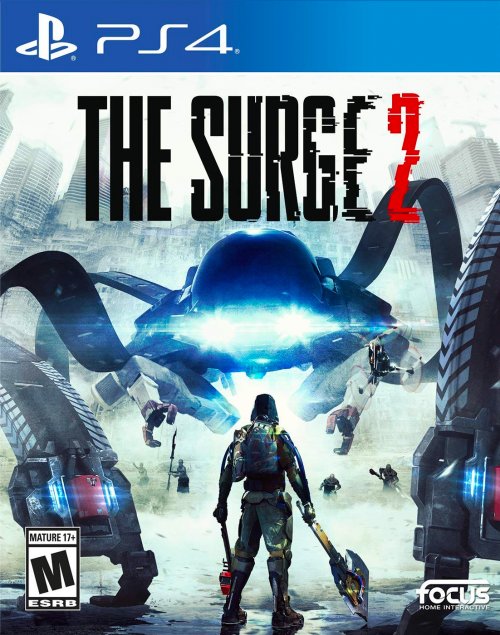 Deck 13 have come a long way since this gen started and along with the first Surge, have really begun to improve leaps and bounds. The first Surge showed great promise but there was small details that kept the game from being a true masterpiece. Their take on the Soulslike genre was interesting and the fact that a sci-fi angle hadn’t been tackled yet, really put them in their own field when comparisons would be made. Perhaps a bit unfortunate for Deck 13, Dark Souls 3 hadn’t been released that long ago when The Surge was released so it was still fresh in a lot of people’s minds and may have impacted judgment a lot more. Fast forward to 2019 and Deck 13 have really improved in all of the parts of The Surge in every way.

Following the events of the first game, the story this time takes place entirely in Jericho City, a dystopian futuristic city following the events of the first game’s ending. Controlling a character you create yourself, you’ll find yourself in a city in ruin run by different factions as people desperately seek to survive the situation they’re faced with. The setting of the game is a huge departure from the first, where you found yourself in a ruined factory that looked very similar throughout the majority of the game. Aside from the Exoskeleton based enemies you’ll find there, Jericho City is a lived in place with plenty of survivors and factions that have risen up, all vying for power. It creates a more interesting city with diverse locations and allows for a less lonely experience. 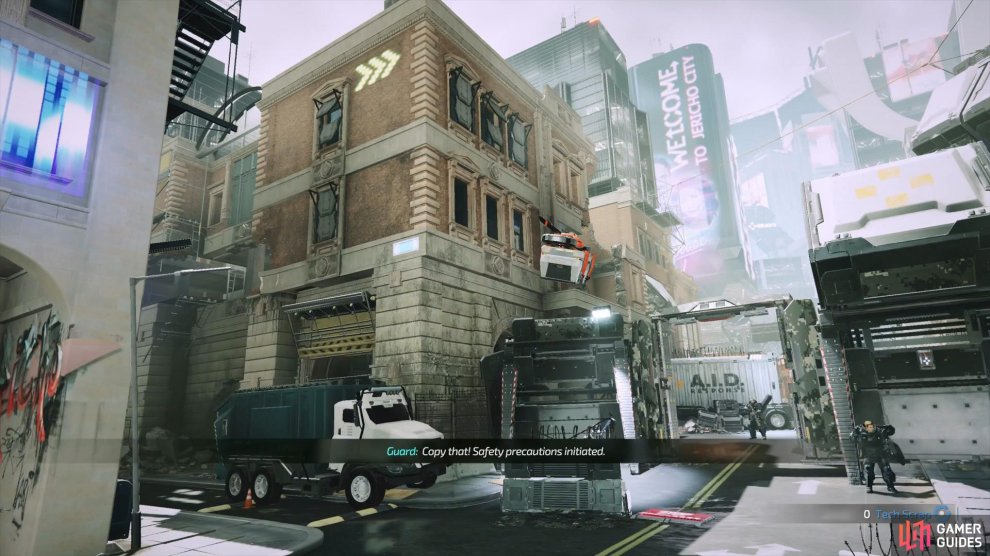 The setting is a lot more interesting and varied than the first game.

The world itself is deserving of the highest praise you can offer to The Surge 2, I found myself getting burnt out by the original’s setting but the cityscape offers so much more varying locations for you with both vertical and horizontal exploration. The Detention Center you find yourself in at the start of the game isn’t the greatest but it does enough to provide an interesting prologue as you get to grips with the controls. Once you step out into Jericho City for the first time however, the world truly comes to life. Each area is distinct with multiple paths through it and the open natured approach to the game, especially in the early hours, really gives you the illusion that you’re exploring this massive city. Nothing seems out of place either, you have Hooklifts that take you up to higher areas along with more conventional lifts but they all fit the lore and setting and help to create a fantastically interconnected world. There’s many hidden paths and shortcuts that lead around the city and finding one is rewarding enough for your exploration.

The people you come across really add to the atmosphere as you’ll encounter three main factions in the city, all vying for control with their own agendas and who try to push the player character into their service. One faction is purely based on their own futuristic religion, another is your typical drug smugglers and of course you have the authorities taking up the final faction. On top of this, you’ll find people out in the world to talk to such as homeless people or business owners and you’ll also find small hubs where people have gathered, allowing to accept more optional tasks and do a bit of window shopping outside of your usual upgrading means. It helps to make Jericho City feel alive and reinforces the notion that you’re in a city, a huge difference from the lonely deserted factory from the first game. 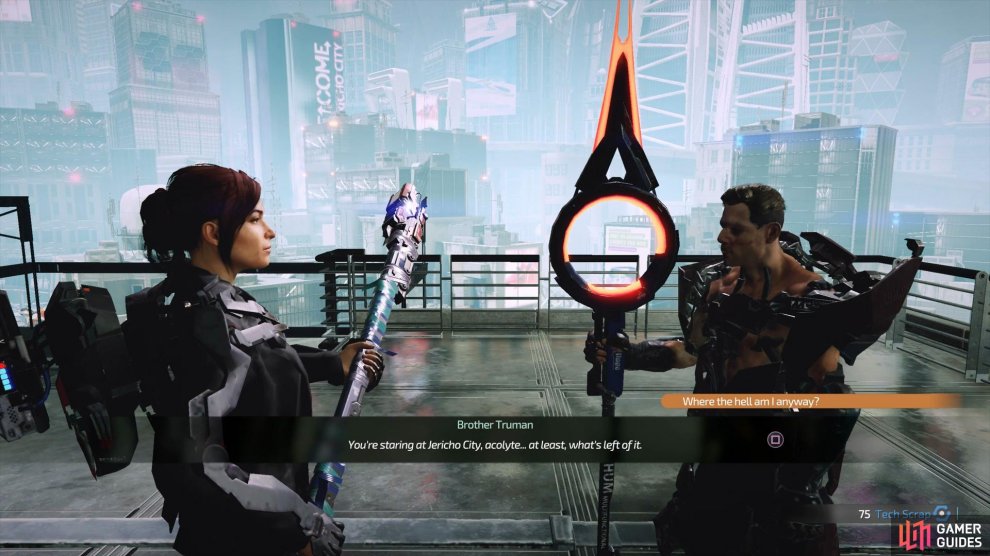 You'll come across different factions that have their own motivations.

Upon starting the game for the first time, there’s a character creation option as you control your own creation this time around instead of Warren, the protagonist of the original. The options are fairly basic and there’s not a great deal to choose from but it does give you a bit of personalization to your character that really helps in these games even down to your own backstory such as a previous employee of the CREO corporation from the first game. This plays a little into your conversation at times, certain characters will recognize your background and comment on it and you can take it a bit further by choosing responses to questions that affect your persona should you so choose. On top of this, there are choices in the options screen to hide your helmet which, fans of the first game will recognize that some of the armor could look ugly at times, so being able to see your created character’s face goes a long way.

The combat hasn’t changed up too much from the first game, the general idea is to still do enough damage to a particular body part of an enemy and then perform an execution to sever it. You have Stamina that is used to evade, block or attack the enemy along with the Energy gauge that affects your executions and Implants again. What has changed this time around is the fact that your Drones now have their own resource in the form of bullets and other consumables whereas in the original, it was all dependent on your Energy gauge. This makes a huge difference because there was too many mechanics relying on Energy in the original game but this time around, you can make much more use of your Drone. There are a huge variety of weapons that fall under many different weapon classes and within a few hours of the game, provided you focus on slicing off the enemy’s arm that wields it, I found myself with over 10 weapons. Each weapon class plays differently too with a satisfying weight behind each one, favor taking a bit more cautious approach? Then wield a spear and jab from a distance, fancy yourself a speedier playstyle? Then equip a Twin Rigged blade and rush in dual wielding. You have both vertical and horizontal strikes and combining the two can lead to some great looking combos. There truly is a diverse range of weapons to experiment with and finding a new one is always exciting to play around with to see how it feels. 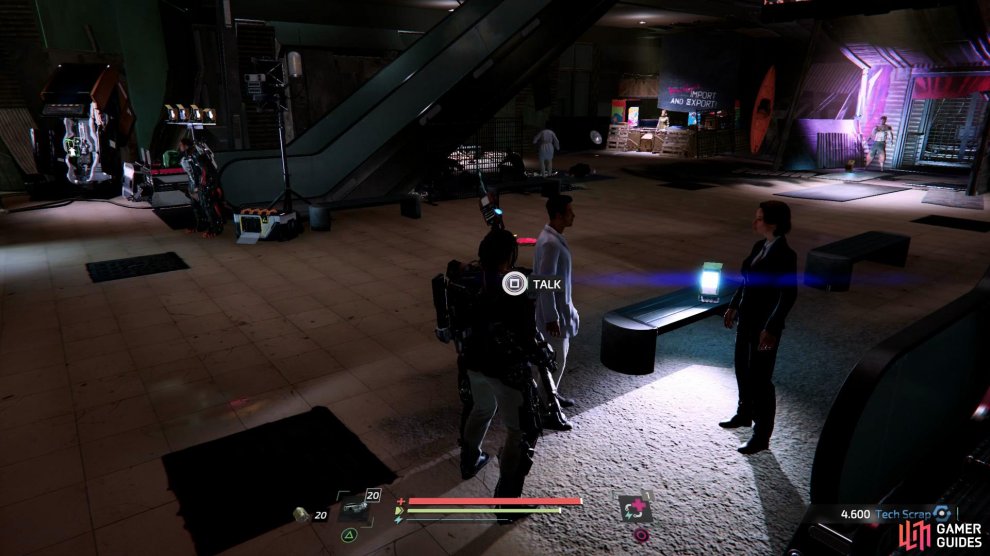 There are non-combat areas with people to speak to and quests to accept.

The Drones deserve a special mention too, whereas they felt more like an afterthought in the original Surge, this time around they feel like an extension of your combat abilities. Ammo is plentiful and drops from enemies often leaving you the opportunity to mix in shots between your attacks or even simply use a shot to cause a distant enemy to approach you alone. Additionally, there are multiple Drones to discover, all with varying effects and systems be it a rapid shooting Drone or a slower but stronger hitting one. The game’s online features are also tied behind the Drone as you’ll come across one that will allow you to graffiti the ground or wall, essentially acting like the online messages you see in many games of this genre and thanks to the game’s improved level design, you can make some good use out of it. Alternatively, there’s a Drone that will drop a banner where you place it, this essentially creates a hologram of your current character and based on how many players find it out in the world, you’ll be rewarded with Tech Scrap (the game’s primary currency needed to upgrade).

The upgrade system In general is a lot more fluid than the base game’s too, you’ll still need to sever the parts of your enemies that you wish to obtain their part from but it’s a lot easier now and aside from the first time you cut a new weapon or armor, you’ll obtain parts that can be used to upgrade that particular armor slot. If you’re looking to upgrade your current Leg Armor, sever the Leg Armor from any enemy (regardless of the type of armor) and you’ll be able to get the parts needed. Higher level enemies will drop higher tiers of the upgrade materials and you can easily downgrade the upgrade materials so that you can upgrade lower armor or weapons whenever rather than seeking out lower leveled enemies. Armor also has set bonuses tied to them for a partial set (three matching pieces) or a full set (five matching pieces) which helps each armor set feel a lot different to their counterparts and all of the effects are incredibly useful, be it recovering health from using an execution to increasing resistance against ailments. Your overall level is once again tied to your Core and you level it by pouring in Tech Scrap which in turn, rewards you with two points per level to improve your Health, Stamina or Energy along with the ability to refund them at any times for a Tech Scrap cost. At certain level thresholds, you’ll unlock more slots for Implants and it will also affect your overall ability to equip certain equipment due to the Core Consumption cost on everything. 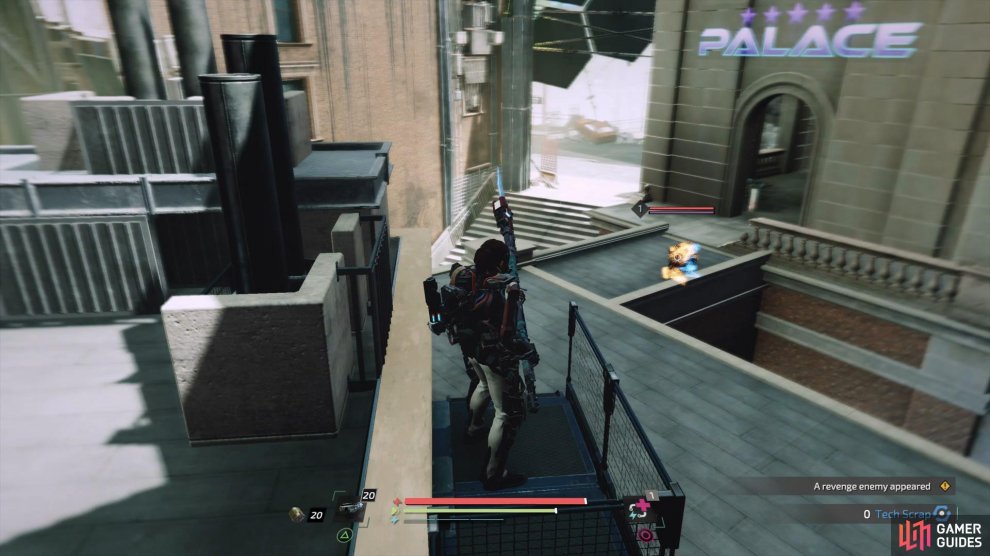 The level design is improved a lot from the first game and interconnected in many ways.

The music and sound design fit the aesthetic well with typical sci-fi music and while by no means exceptional, it does no harm and compliments it well. The voice acting is fine and the performances are delivered well which is welcome as you’ll encounter a lot more people than you did in the original Surge. You’ll find Audio Logs scatted all over the world too, which act as the game’s collectibles and listening to them adds to the lore and background of the world that The Surge 2 is trying to develop. The Surge 2 is not without its problems however, the AI can still find themselves stuck in the geometry at times and I’ve had a few bizarre deaths where I would use a lift only to die instantly at the top as if I fell down a hole. These were few and far between but were there nonetheless and in a game where dying in between checkpoints matter, it lessened the experience a little. There’s both a performance mode and resolution mode to select from in the options and while the visuals took a little hit with the performance mode, the game ran fine without any problems.

The Surge 2 improves upon the first game in almost every way which is a huge testament to how far Deck 13 have come as a developer. If you disliked the first game and found no enjoyment anywhere, you’ll most likely find nothing for you here but if there were parts you enjoyed about the original, the Surge 2 improves upon it and makes the sci-fi Soulslike genre it’s own.