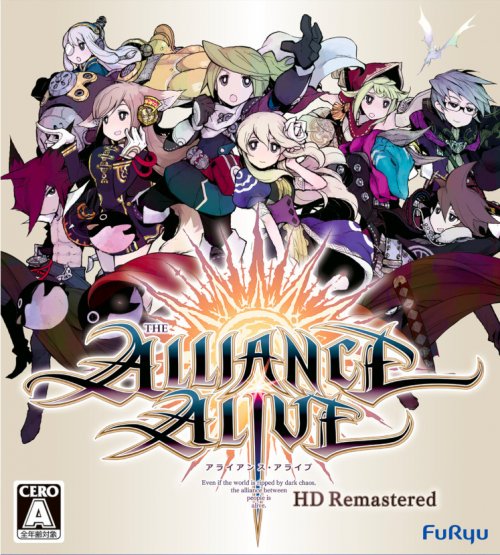 The Alliance Alive originally released back in March 2018 on the Nintendo 3DS and was largely forgotten for being released on an old system when most people had moved on to the Nintendo Switch by that time. The small amount of people that did end up picking it up will tell you that there was a gem hidden in there, one that harkens back to the classic days of JRPGs and that took heavy inspiration from Square Enix’s Saga series. In truth, this was developer Cattle Call’s second attempt at a classic JRPG after 2015’s The Legend of Legacy, another game that had some nice touches but ultimately was very light on content and ideas. The Alliance Alive has always had a lot of interest in it not only due to the battle series being influenced by the Saga series but by the scenario being written by Yoshitaka Murayama, known for his work on the Suikoden series. 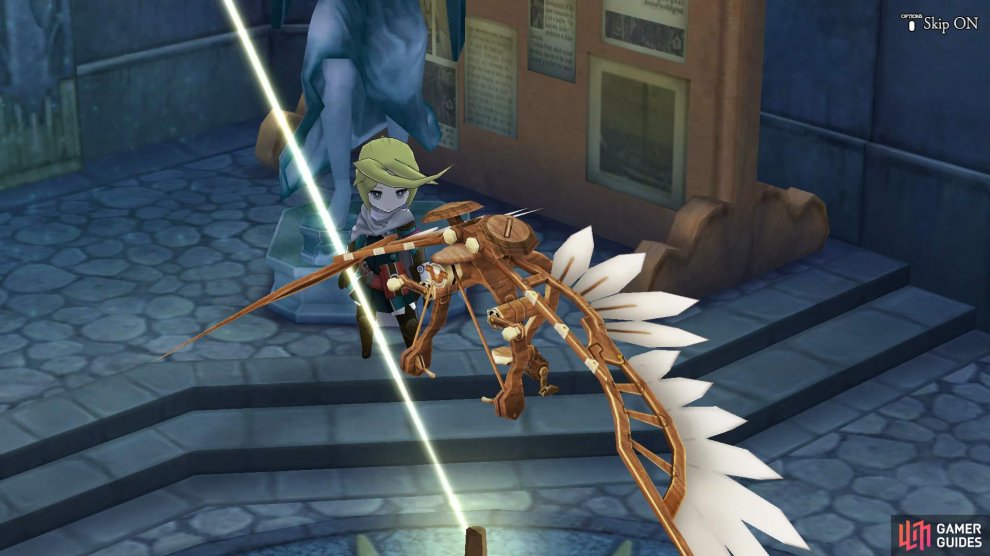 The game is ultimately still a 3DS game despite the increased resolution.

It was a strange decision to remaster The Alliance Alive so soon after its initial release in the west but it’s one that’s well worth it to give the game a second chance on more current systems. The story is an interesting one, it takes place in a world that has been split into realms when a race known as Daemons subjugate the human populace. A group of unlikely candidates band together in the name of resistance and revolution to take back their land and restore it to its rightful state. The story is told across chapters as you take control of different characters to see it from different viewpoints and it starts off somewhat basic truth be told. As the plot develops however, there’s a competent story with some important themes that manage to break out and the slow start has somewhat of a payoff as your group is formed. The game’s story also doesn’t outstay its welcome, clocking in around 30 hours for a more complete playthrough with a new game+ unlocked after you beat it.

When you speak about The Alliance Alive, the first topic should always be its combat system which is arguably the strongest aspect of the whole package. As previously mentioned, it borrows heavily from the Saga series meaning that the standard style of progressing your characters are slightly different. There are no levels to increase, instead you’ll gain HP and SP (needed to use skills) based on a random chance at the end of a battle for each of your characters. You learn weapon skills by equipping one of the many weapon types and using existing skills in the hopes that you’ll spark a new one that will then get permanently added to your ever growing list. While there are certain ways to increase the chance a little, for the most part all of this is down to random chance and you can either go long stretches without learning anything new or get three weapon skills in one battle. 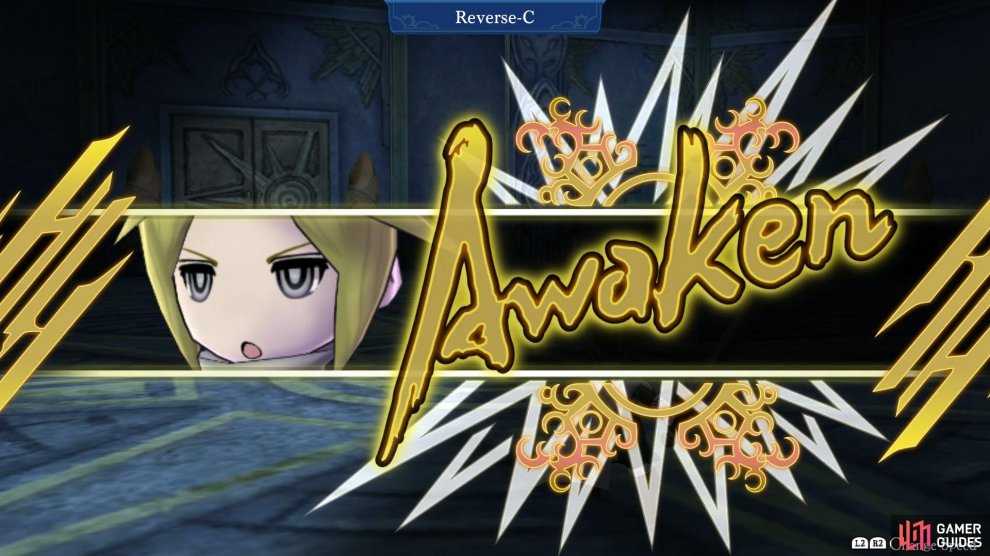 It's thrilling when you see your characters awaken to new skills in battle.

The characters you recruit throughout your adventure have their own base stats and while some may be more suited to other tasks than others, for the most part any character can learn any skill and be effective at it. On the one hand, this gives you a great deal of flexibility on how you build your party and it’s for good reason too as there are one or two moments in the game where you’ll be forced into using your entire roster. On the other hand, characters don’t really end up being more than a blank canvas for you to play around with. There are a large variety of skills however, over nine different categories (two of which are magic and are learnt in a slightly different manner) and each category has well over 10 skills to learn each meaning you’ll always be unlocking something along your adventure. The Ignition system is also interesting, after sustaining a certain amount of damage in combat, your characters will enter this state, allowing them to make use of Final Strikes. These are powerful abilities attached to the weapons you have equipped with the tradeoff that the weapon will be broken after use, locking you out of skills on that weapon until you repair it. It doesn’t cost anything to repair them however, save for resting at an Inn so you’ll want to incorporate Final Strikes into your strategies.

Your characters can be kitted out in many different types of equipment, such as two weapon slots, a head, body, arms, leg armor slot and two accessory slots, this leaves a lot more room to play around with for your stats. This is important however as it’s the only way you can raise your stats because, as previously mentioned, you’ll only gain HP or SP at a random chance rather than the other stats which can be troublesome at times. Healing is handled interestingly as well, in most games you’ll usually learn a healing skill that can restore the whole party but for the most part, in the Alliance Alive, you’ll only be able to heal one party member at a time. When you consider that you can have up to five characters in your party at one time, you’ll really need to pick and choose who needs healing and when if you only have one dedicated healer. 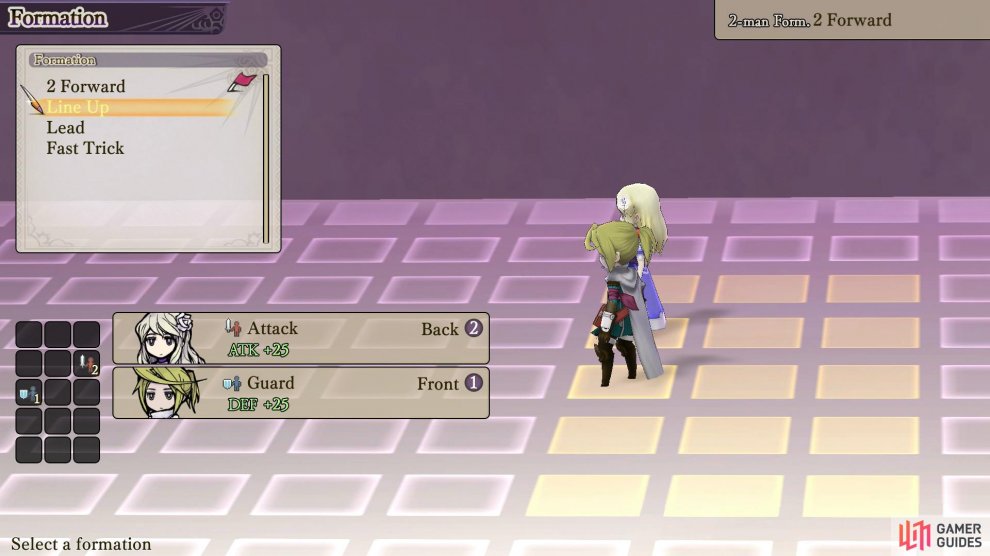 The Formation system allows for many ways to tinker with your combat effectiveness.

This brings into mind the use of the Formation system, where you can assign your party a formation based on three positions. As battles take place across three lines, characters can be placed in any row and assigned a position of Attack, Guard or Support, boosting their effectiveness in each particular role. This is where the most interesting part of the battle system comes in to play because you can come up with some really creative formations and make your party more effective, it’s fun coming up with new formations every now and then that may serve you better in a challenging boss encounter. Healing isn’t as important however, it’s only worth making use of if you feel your characters may die in that particular battle as after every battle, your party is restored to full HP and this is a system I find pushes the game towards the easier side of the spectrum.

Difficulty is one of The Alliance Alive’s largest problems, the game for the most part isn’t overly tough, allowing you to mow down regular enemies with ease without much care due to the fact that you’re restored to full HP in most situations. The developers were kind enough to include an option to speed battles up to either 2x or 4x with a press of a button and with the ease at how most battles play out, you’ll find yourself breezing through them at 4x speed before too long provided you’re at least somewhat competent with the formation you set (for example placing your healer in the Support position). That’s not to say there is no difficulty to be found, there’s a rather large difficulty spike around the middle of the game that will catch unsuspecting players out and considering it’s in a situation where you can’t exit and grind for more stat increases, it could become a real problem if you don’t have a save before that particular scenario. For the most part, if you fight every battle in your path, you shouldn’t have too many problems even though the difficulty of some of the boss encounters towards the end of the game are more worthy of the excellent battle system.

The other main feature of The Alliance Alive is the guild system, a system that unlocks once you’re nearing the half way point of the game. It seems a little too late in gaining access to it however it serves the scenario well and would feel out of place if available from the beginning. There are five guilds throughout the world, with each one providing boons based on how many recruits you find, another system that unlocks at the same time. Based on some of your previous actions or future ones after it unlocks, you’ll be able to recruit many of the people around the world and assign them to the guilds. For each milestone you reach, you’ll increase its level and unlock some useful abilities. Some are more redundant, such as allowing you to learn more about the world and the people that inhabit it but some are game changing such as gaining access to powerful spells or NPCs that will appear in dungeons allowing you to save or refill your SP, decreasing the somewhat easy difficulty further. That said, it’s somewhat satisfying to explore the world looking for more recruits to fill out your ranks and unlock more tools for you to play with. 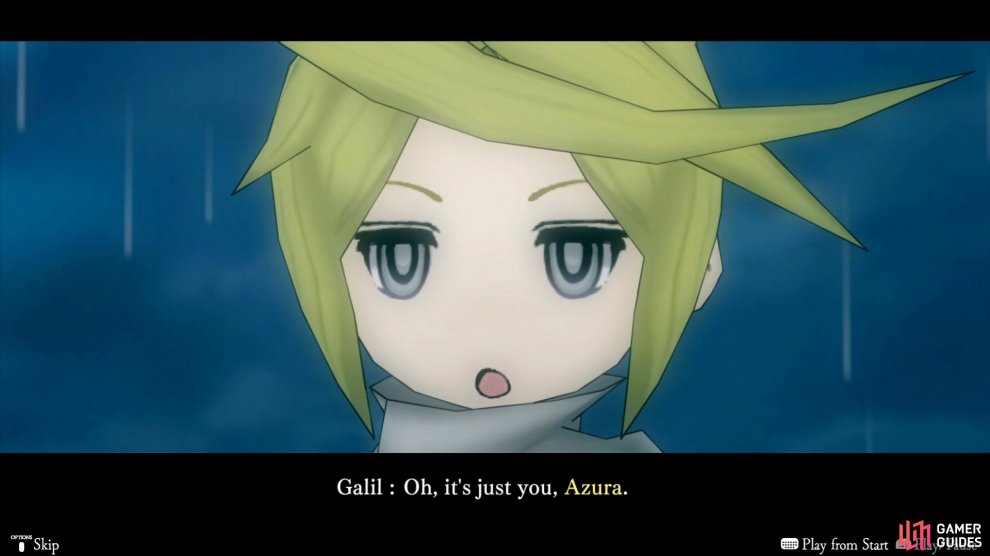 The lack of voice acting is jarring in the movie scenes where characters mouths animate.

At the end of the day, The Alliance Alive HD Remaster is still a Nintendo 3DS game however and it’s evident across the whole game design. Yes, the graphics are sharper and it does look a lot more pleasing on the HD systems but the somewhat basic dungeon design and simplistic world are evident at all times. There are some interesting ways to explore the world map via the different methods of transport you can unlock but other than that, it’s still far too basic and what holds the game back from being truly great. The game runs well, as you may expect from a remaster of a 3DS game and the loading is snappy but there are other places in which the localization suffers a little. I found more than one instance of untranslated Japanese text, a problem that frankly shouldn’t exist for a game that has already had an English localization however it’s something that could easily be fixed via a quick patch so here’s hoping the game gets the attention it needs.

The sound design is a mixed bag, the soundtrack is of exceptional quality, composer Masashi Hamauzu of Final Fantasy X, XIII and the Saga series fame delivers a fantastic score and it brings the world of The Alliance Alive to life. I’m a bit disappointed I don’t get to hear more of the excellent battle tracks however as during your romps across the world map and some dungeons, the area theme will persist even during battles. Additionally, the lack of voice acting is a strange omission, especially from the HD Remaster, it would’ve given people another reason for 3DS players to play the Remaster as its light on new features from the 3DS version. For the most part, you can ignore the lack of voice acting however there are many movie scenes where the characters will move their mouths and the lack of voice acting make the scenes jarring and something that I’m not a fan of.

Ultimately, The Alliance Alive HD Remaster is an interesting call back to the JRPGs of old and the excellent combat system is its saving grace. If you played the original back on the Nintendo 3DS, there’s not enough new features to dive in for a second time however if you missed out on this game the first time around then The Alliance Alive HD Remaster is a competent if somewhat unremarkable game.