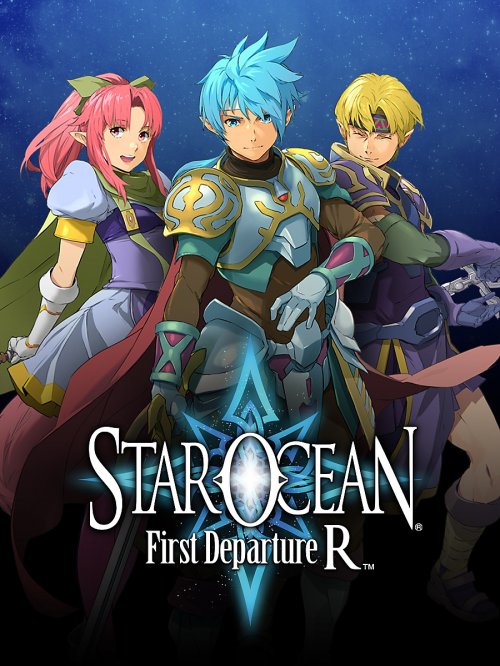 A review copy of this game was provided by the publisher, Square Enix.

The Star Ocean series is a property that has seen its up and downs throughout the years, although the west didn't see a Star Ocean game until the second came out on the Playstation. The original Star Ocean didn't see a western release with the first one on the Super Nintendo, and it wasn't until the Playstation Portable remake that they would see it with an official English localization. Since then, the series has seen multiple iterations released, across different platforms, but the series didn't quite catch on like some other popular RPG franchises. Fast forward to 2019 and Square Enix has decided to enhance the PSP remake of the game, releasing it on current generation hardware. Does the game still hold up today, or should the game be launched into the ocean of stars?

The game begins on the planet, Roak, where three youths are living in the village of Kratus. They are the town's defense force, protecting it from whatever happens to be causing trouble. They eventually learn that there has been a mysterious outbreak in Coule Village, a neighboring town, where people are turning into stone. While investigating this and hearing of a rumored herb that can cure anything, the party runs into some strange people and their true journey is set forth. With their help, they plan on getting rid of this strange disease, although it will bring them many trials and tribulations. At the time, the first Star Ocean was fairly nice, as it offered a sci-fi approach to storytelling, instead of the usual fantasy fare from games like Dragon Quest and Final Fantasy. It's definitely not top notch storytelling, though, considering its age. 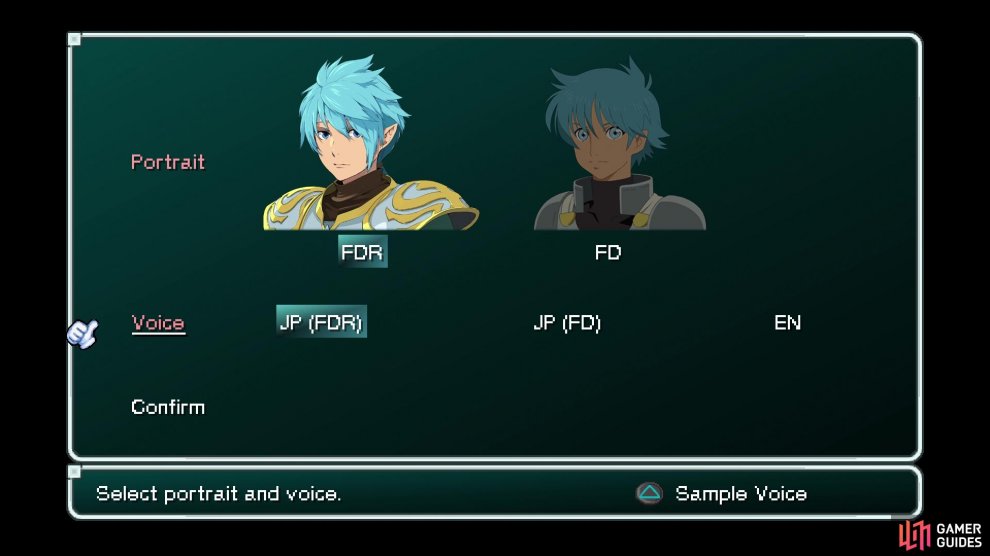 Moving from the story and onto the graphics, remember that this game was initially released on the Super Famicom (Super Nintendo), where it was actually one of the better looking games on the system. The game was later remade on the Playstation Portable, which looked better, and this version of the game had the graphics touched up to make them look even better. While the backgrounds might not have been improved by a lot, you can definitely see a change in the character sprites. They have been upscaled and all of the animations are smooth, with nary a hiccup at all. One of the actual additions in the game comes in the form of new character portraits, which look a lot better than their PSP counterparts. If you enjoy the other portraits more, though, you have the option to switch between them at any time. The only slight problem with the new character portraits is that the animated cutscenes in the game use the older portraits, so having the new ones chosen will make those cutscenes a bit jarring, although they are pretty sparse.

If there was a weak point to the first Star Ocean game, it would probably be the music. The battle music, which you will be hearing A LOT, is quite mediocre, although the boss music is a little better. Although the actual soundtrack lists a greater number of tracks, it does seem like the game doesn't really utilize them very much, since they play a good number of the same tracks over and over. In the same realm of sound design, the English voice acting in this is actually pretty well done. Similar to the character portraits, you have the option to pick between the English voice acting from the PSP version, as well as between two different Japanese voice tracks, the one from the PSP remake and the voice actors from the original version doing new voice work.

As with any game, the gameplay loop is where things really matter, especially for a remastered game such as this. The biggest draw of the Star Ocean series is its real-time battle system, which was one of the first action RPG battle systems in existance (other than Tales of Phantasia, another game/series that debuted on the Super Famicom). As you run around the various dungeons and field maps of the game, you will get into random battles, similar to a lot of other RPGs of the time. Upon getting into a battle, the game will transition into a side view of the battlefield, where you will be able to move on a 3D plane (left-to-right and up/down); enemies also move around the battle in the same manner. 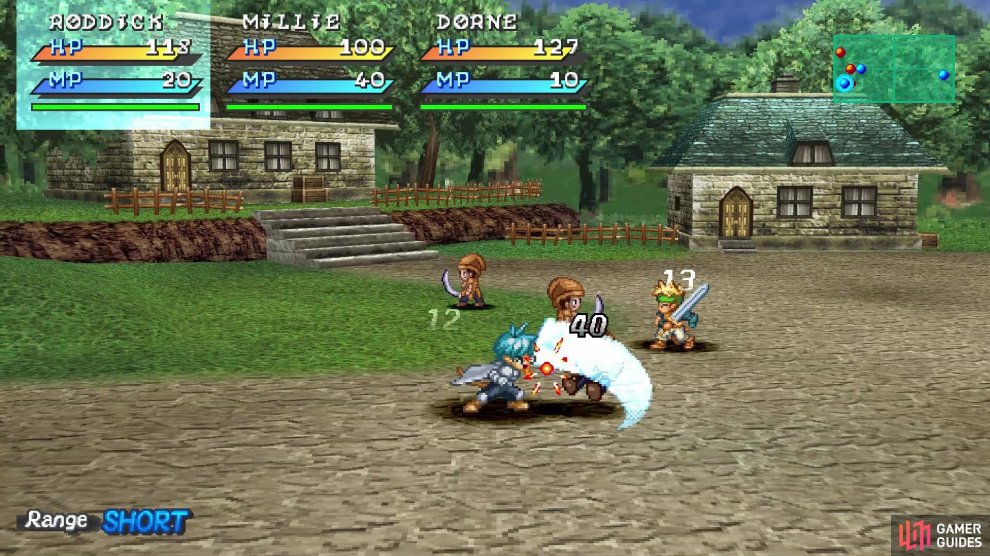 The battle system is pretty basic.

Since this is an action battle system, everything will take place in real action, so you control your character, have normal attacks and special attacks. Normal attacks, for the melee characters, come out in combos, but they can easily be interrupted by enemy attacks. Special attacks are assigned to L1 and R1 on the Playstation 4, so you can only ever have two of them equipped on your melee characters at once. This is especially annoying if you want to use more than two skills for the melee characters, but you will have to resort to switching them out often in between battles.

Magic users (symbology, as it's called in the game) can also set shortcuts to the L1 and R1 buttons, but they have access to all of their spells via the Symbology menu during battles. The only difference is that they can spam these spells, since each one has its own casting time. This makes magic users being a little better to control in combat, especially if you avoid using those with healing spells, although you do have to contend with the cast times. You are only able to control a single character in battle, though, with the others being designated to the computer to control. The problem with this stems from the fact the AI options are limited and pretty much focus on a single aspect. Thankfully, you can actually switch the character you control while in the middle of the battle, in case you need to do such a thing. Overall, though, the game isn't much more than spamming the same skills over and over in the long run, so the combat can feel a little bit shallow.

As you defeat enemies and earn experience, you will level up, increasing your characters' stats and earning Skill Points. These Skill Points can be used to purchase skills, giving you access to item creation, specialties and once you do enough, super specialties. Item creation and the specialties will really help you with the game, giving you options to create new weapons, armor, cooking dishes for healing items and much more. It is all of this that makes Star Ocean truly unique, especially when you considering that this was originally a Super Nintendo game. With enough patience, you can really become very powerful in the game, so it's definitely worth investing into the skills. One of the more annoying things in the game is the random encounter rate, although battles don't take too long. Thankfully, there is a Specialty that allows you to lower the encounter rate, as well as raise it, although there is a bit of trickery behind it that you'll have to experiment to make it work. 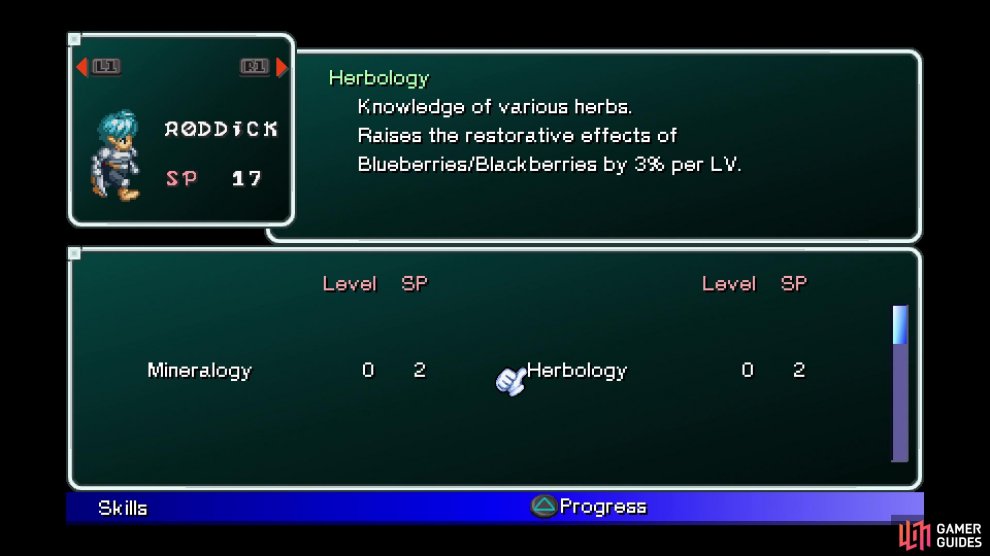 The meat of the gameplay comes from messing with the Item Creation system.

One of the problems with this remaster of Star Ocean is that it removed some of the difficulty settings that were introduced with the Playstation Portable remake. The original version of the game didn't have any difficulty settings, while the PSP remake introduced a few that might be familiar to those fans of the series. This remaster does away with those, while rebalancing the entirety of the game. Of course, this rebalancing isn't so much more than just tweaking some stats, but the game definitely does get a bit more difficult later on in the main story. Unfortunately, you can't do nothing about this, if it proves to be annoying or difficult, other than bear it. What is annoying is the backtracking through a lot of previously visited areas, so you're going to be annoyed fighting lower level enemies that die in a single hit and reward you with a very small amount of experience. Granted, this was before the time of helping alleviate that problem, it feels like such a time waster.

Overall, the game isn't too long, but it's definitely in line with some of the RPGs back in the Super Nintendo days. The main story will probably take you a good 20 or so hours, depending on the bit of side content you do during it. Thankfully, like the majority of Star Ocean games, there is some post-game stuff for you to do, adding some extra hours onto the main story bit. By far, the biggest replayability stems from the fact that you aren't able to recruit every character on a single playthrough. So, if you're looking to do everything the game has to offer, it would require multiple playthroughs of the game. This is especially true if you decide to go after all of the trophies. 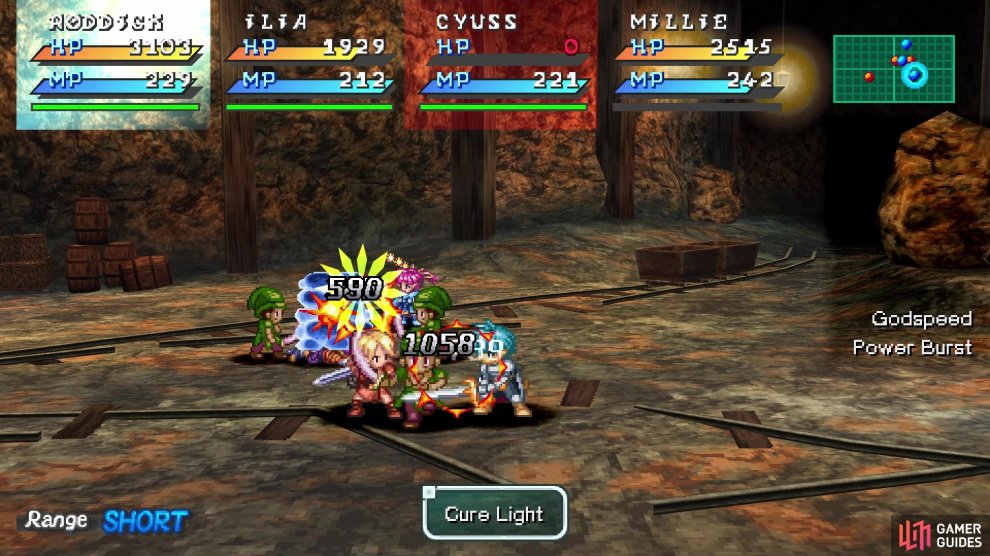 Some difficulty spikes later on might be a little frustrating.

Star Ocean: First Departure R is definitely a game that might not have aged as well as some others, although the game is still fun to play. The music is one of the weakest points of the game, as is the relatively simple combat system. If you remember that the game is a remaster of a remake of a Super Nintendo game, a little can be forgiven, especially since it gives newer gamers a chance to try out the first game is a long-running series. The price is definitely a good spot to not break the bank, either, so fans of RPGs might bite just because of that. The relatively short length is also something that should be taken into consideration, meaning some people will be waiting for a sale in order to buy it. In the end, this is an above average game that while fun to play, is missing some things to make it a must buy.

Exploring the ocean of stars is never better than with this version of the game. There are some noticeable flaws that bring down the score, especially with modern gaming, but being able to experience the first game that started the Star Ocean series is fantastic, plus the game is just fun to play.

Jarrod started writing walkthroughs for games in 2002, and has been playing games since he was three years old, on the original NES. He is a huge fan of JRPGs and platformers, with Chrono Trigger being one of his top games of all time. Other hobbies include doing puzzles and listening to music.