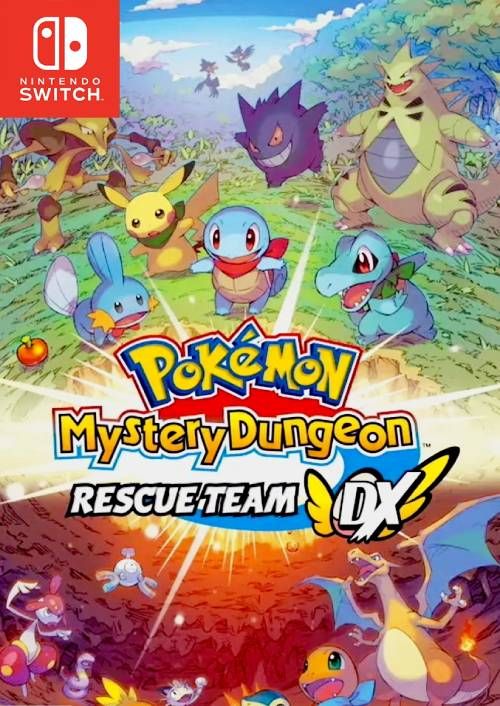 It’s been almost fifteen years since the original release of the first Pokémon Mystery Dungeon titles, the first of these being Blue Rescue Team and Red Rescue Team which have seen a shiny new remake in the form of Pokémon Mystery Dungeon: Rescue Team DX which combines elements from other titles in the series as well as the games it’s based on. Developers Spike Chunsoft return to the franchise, equipped with a new console to further expand their ambitions for the series. But have they taken advantage of the Switch’s capabilities?

From the moment the game loads, you are treated to a massively different visual style than the originals. The “painted” style of the artwork immediately draws you in and the game wastes no time in showing off its cast of Pokémon in all their colorful glory. Like the originals, you begin by being asked a series of questions about your personality and the answers you give determine which Pokémon you are. You can select your own from a choice of sixteen if you feel the game didn’t quite match up to what you had in mind. 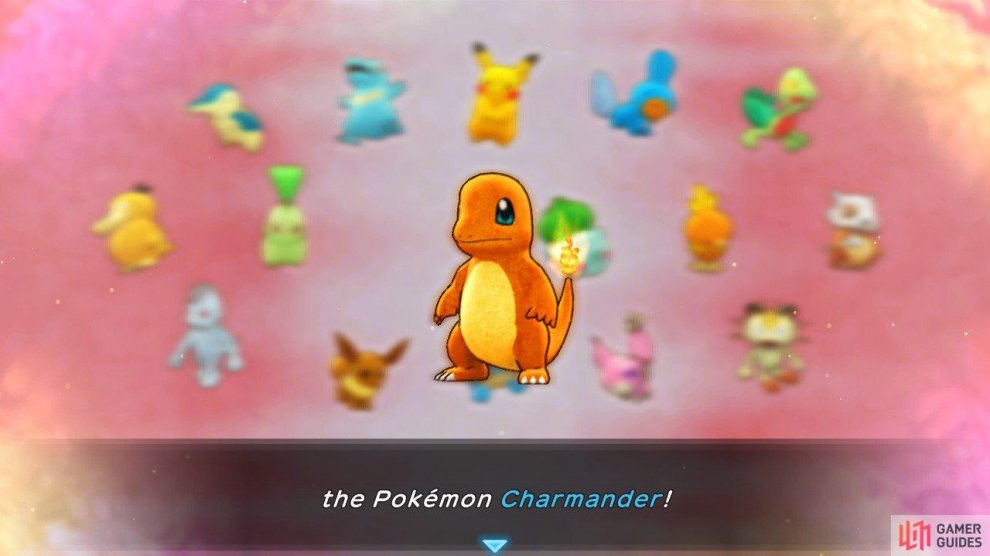 You can choose from quite a few fan favorites.

After you make your choice, you are thrown headfirst into the world of Pokémon - you play as a former human inhabiting the body of a Pokémon and are tasked with discovering why this world is suffering calamities. As a result of these phenomena, many Pokémon are in need of rescue and so your partner (whichever Pokémon you selected in the beginning) decides to form your own rescue team. There are quite a few distinct rescue teams of varying abilities and fame which you will meet throughout your journey but these have little bearing on gameplay, only story. The story itself is hardly groundbreaking and some of the dialogue is downright cringeworthy although there are some genuinely funny moments and the animations and artwork are adorable.

Your rescue team forms the basis of the gameplay loop: you choose from a party of three Pokémon; initially you, your partner and another until you find new Pokémon which you send out to a dungeon to rescue other Pokémon or complete tasks they have set you, such as bringing an item to a stranded Pokémon or finding an item in the dungeon. The tasks are not very varied and follow a very set pattern e.g. find a fainted Pokémon on one floor, find an item on another floor and so on. The general purpose is to complete whatever errands you have to do in a dungeon by climbing as many floors as it takes to finish them. Different dungeons have different amounts of floors, with the later game ones having substantially more floors than the earlier ones, meaning preparation becomes crucial. Upon completion, you get rewards and your rescue team rank increases which, when levelled up, unlocks more inventory capacity, camp capacity and the like. 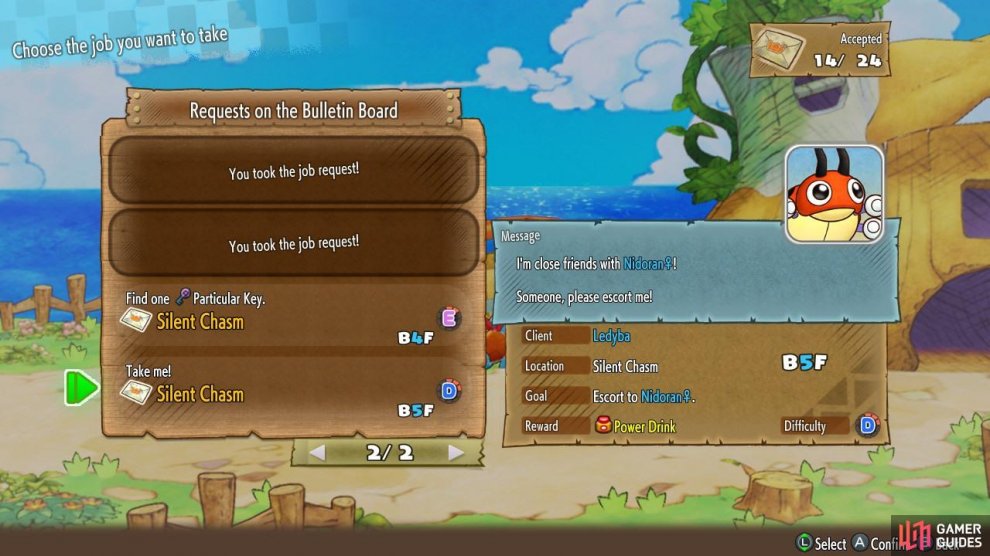 You fulfill requests for other Pokémon and increase your Rescue Team rank along the way.

The dungeons usually follow a “type” theme such as grass, fire, water etc and the wild Pokémon there are normally the same type as the dungeon theme too. It helps to know this information before you set out so you can ideally choose a team that matches up well against the type of Pokémon you will likely face. During your time inside a dungeon, after defeating a Pokémon, there’s a chance it will want to join your team. As long as you have the right “camp” for it to stay in, then you can recruit the Pokémon permanently upon leaving the dungeon, though even if you don’t, you can still have it accompany you to help out while in a dungeon. You can have several extra Pokémon helping as well as your basic three-man team during your time in a dungeon. Unfortunately, these Pokémon cannot be controlled and often have low stats so become cannon fodder for stronger enemies which makes claiming them as your own a frustrating task if they get knocked out with no way to revive them. Only upon completing a dungeon will a Pokémon permanently join your team provided you have the right camp. If you have a Wigglytuff Orb in your inventory, you can make the right camp inside the dungeon provided you have the coins handy, so it’s always a good idea to carry one of these with you. While this allows for replayability of a dungeon, completionists will find it irritating that you either have to use an inventory slot for the Orb, or repeat dungeons because you didn’t have the right camp for the Pokémon you wanted to keep.

Combat consists of your team and wild Pokémon fighting on a tiled grid, taking it in turns to move or use attacks and items. It is strictly turn-based and every action, including moving, you do takes up a turn so careful planning is crucial in order to defeat some of the more powerful enemies you will encounter. Each member of your team gets a choice of four moves just like the main series and they can learn new ones as they level or you can use a one-time only TM (Technical Machine) to teach them a new move if you prefer. Most battles are not a complex affair and provided you have reasonable type match-ups, you can power through all but the sub-bosses and boss enemies. At the end of each story section is a boss and there are also plenty of hidden bosses scattered throughout the game. This new version also has a handy auto function which allows movement through the dungeon quickly until battle is initiated. This is certainly a welcome quality of life addition and makes things a lot less tedious than they otherwise would be. 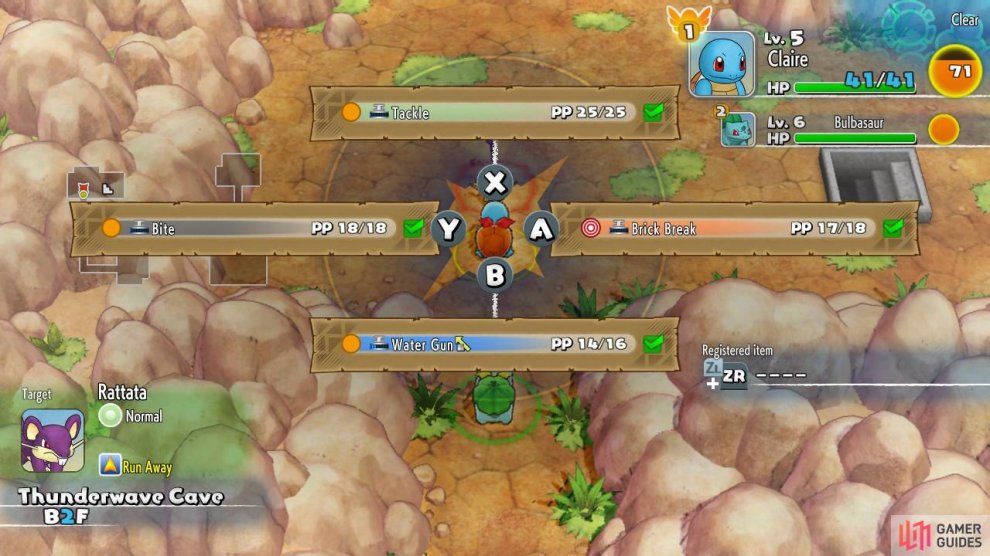 You can choose from four moves when in combat. Most moves from the main games can be learnt.

The biggest challenge involves carrying a sufficient amount of revival and healing items, as well as PP recovery to restore move uses. Pre-planning before a dungeon is essential if you wish to avoid asking others for help online (more on this later) because you ran out of items midway through a dungeon. This only really becomes a problem in the post-game where dungeons become longer and enemies become stronger. Which brings me to my biggest issue with the game: the story itself feels like one long tutorial before the real game begins upon its completion. After completing the story, several other dungeons unlock with just as much content as there was during the main story but these dungeons are much longer with rarer Pokémon. Weather changes and traps become a lot more common, adding another level of difficulty to dungeons which makes the game instantly more interesting. The experience is much more enjoyable when you have to really carefully plan what to bring with you and think hard about type matchups as well as make sure your team is sufficiently levelled - it’s just a shame it takes 20-25 hours to reach this point. During my playthrough I found that if you go out of your way to complete enough requests and are diligent about what items you bring with you, you need only use the same team until the post-game where type advantage has much more of an effect. Like most Pokémon games, you can certainly grind your way out of trouble for the most part.

Even if you fail in a dungeon, you can ask to be rescued by a fellow player online. This is a great idea if you were quite far through a dungeon and don’t want to give up the rewards you have collected. After your team is knocked out, the game will prompt you to create a rescue task by deciding how much of a reward to give (you spend coins) and then you will post it on the online task board. The task will have a difficulty rating depending on the dungeon and floor you were on when you were knocked out. From there, you simply wait for another player to complete the task and you will then be revived at the same place, free to continue or to escape the dungeon as you wish. You can also help your fellow players out by visiting the task board in the main menu and rescuing their teams. The online features are basic but definitely worthwhile if you can be patient and wait for rescue. I can see these features being less beneficial as the player population dwindles which is a real shame because you could be waiting a long time for rescue. I myself was normally rescued within hours during my own playthrough. 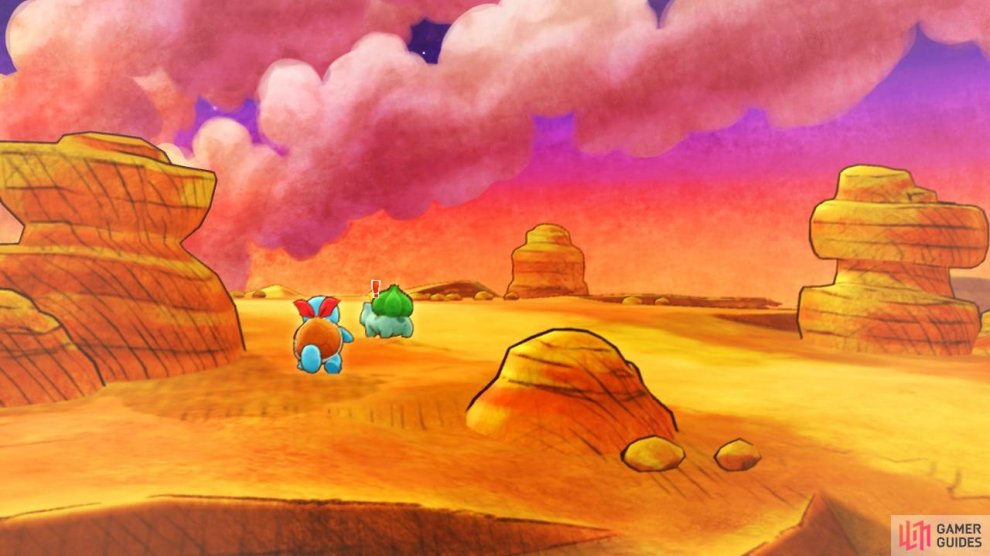 The artwork is truly wonderful.

The overall sound is lovely - a nice blend of new music mixes and throwbacks to the 16-bit era. There are some catchy tunes as you traverse each dungeon and the sound effects are typically cheery and over the top to match the setting. The sound designers have done a great job at notifying players of status changes, battle initiation and item pickups, much like the mainline series.

During my playthrough, I encountered very little in the way of technical problems though the framerate did chug a little at times when many Pokémon were on the screen with weather effects in play. There is also an annoying issue when dashing around dungeons where your character will pause briefly upon entering a new room. This doesn’t seem to happen on auto-mode so I presume this is an intended design choice but feels unnecessary and does disrupt the manual experience.

Like the other games in the Mystery Dungeon series, this one follows the same mould which, if you like the grindy gameplay loop, and a Pokémon setting, you will find yourself really enjoying. Pokémon Mystery Dungeon: Rescue Team DX follows a tried and true formula, adds some quality of life improvements and has an incredibly endearing art style to match. However, it keeps you on training wheels for far too long and as much as I enjoyed my time with the game, the novelty did wear off shortly after completing the main campaign and it ultimately became a largely forgettable experience. Polished but forgettable. If you love the world of Pokémon and dungeon crawlers, you will undoubtedly enjoy the experience. Players who are looking for an experience closer to the mainline series however, should look elsewhere.