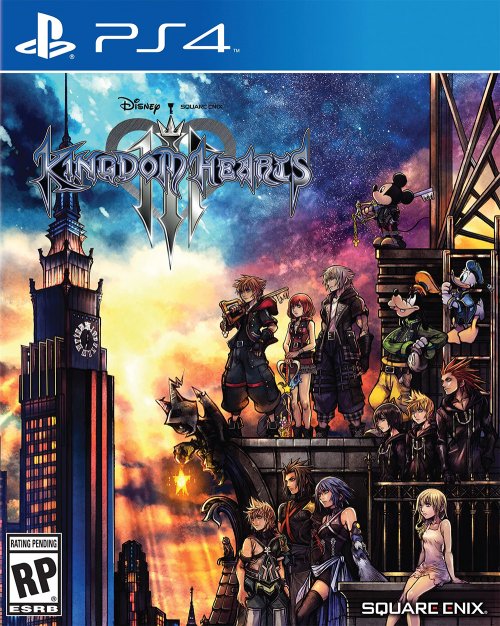 This review may contain spoilers for the original Kingdom Hearts III story!

Kingdom Hearts III released back in January 25th 2019 to lofty expectations to what was the end of the Xehanort Saga. What met fans was a fantastic experience you’d come to expect with the Disney and Square Enix collaboration although there were some disappointment due to the easiness of the game before the release of the Critical Mode patch and the final act of the game feeling rather rushed with a lot of questions unanswered. Fast forward to April 2019 and the Re Mind expansion was announced, a DLC expected to be released in the vein of the Final Mix updates of the previous games in the series.

Before we even get started, let’s make one thing clear, if you’re buying Re Mind for its story additions, you’ll leave sorely disappointed. The DLC features the titular Re Mind campaign, the Limitcut Episode and finally a Secret Episode. On top of this, you’ll find the excellent Data Greeting mode which will allow you to fully play around with all of the Kingdom Hearts III assets and finally the Premium Menu which allows you to play through the game again with modifiers that either make your game tougher or easier, all with new in game achievements to boot. With all this said, the Re Mind campaign might be the most disappointing of the bunch with what it offers and what most fans who are interested in the story are purchasing for. 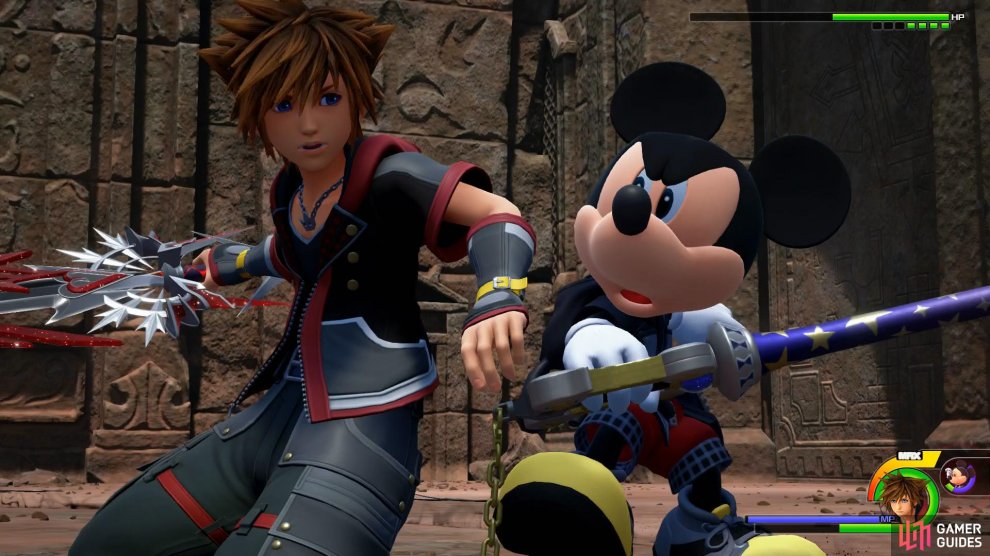 There's plenty of new skills to with your allies to use in the Re Mind campaign.

Re Mind sees Sora return to the game’s final act as he looks to resolve the issues left at the end of the base game. It opens promisingly with a few revelations and information on some of the villains’ motives and you’re treated to some lengthy cutscenes to get it all kick started but as soon as you gain control of Sora for the first time, you’ll find yourself in familiar territory. The first few sections are new boss fights as you see events from a different point of view but soon after, you’ll find yourself playing the entire final act of the game again albeit with one difference, a choice of character for some battles. In the battles that feature Sora fighting with his allies, you’ll be given the option to take control of them for the battle, this opens up new gameplay styles which are fun to play around with however the only problem is that you only get the one battle with them and there’s no way to play around with it again save for starting Re Mind from the beginning again. Other than this, these battles play out the same way as the final act in the original game, what’s worse, if your Sora is upgraded to the highest level with the strongest Keyblade, you’ll make short work of these bosses even if you play as one of the other characters.

The final part of Re Mind does change things up a little however with the game’s final destination, Scala Ad Caelum, getting the treatment it should have had from the start. In the original game, this final world was little more than a backdrop for the game’s final battles however this time, you’ll arrive before the fated hour and with it, the chance to fully explore this beautiful environment. This is treated more like a smaller version of a world from the base game, you’ll have enemies that you can fight featuring enemies from across the entire game, chests to plunder along with your primary task. This task involves completing puzzles in order to obtain what Sora is looking for and it allows you to fully appreciate and take in Scala Ad Caelum, you’ll also be able to return to this world even after finishing the Re Mind campaign allowing you to hunt down more materials should you need them. This all leads to Re Mind’s final battles and arguably the strongest point of the Re Mind campaign, the events are a spectacle and well worth the short playtime for the Re Mind campaign. The main disappointment here lies in the fact that the campaign will take you a little over three hours and for story information and revelations, it’s far too short for those looking at this DLC for this purpose. 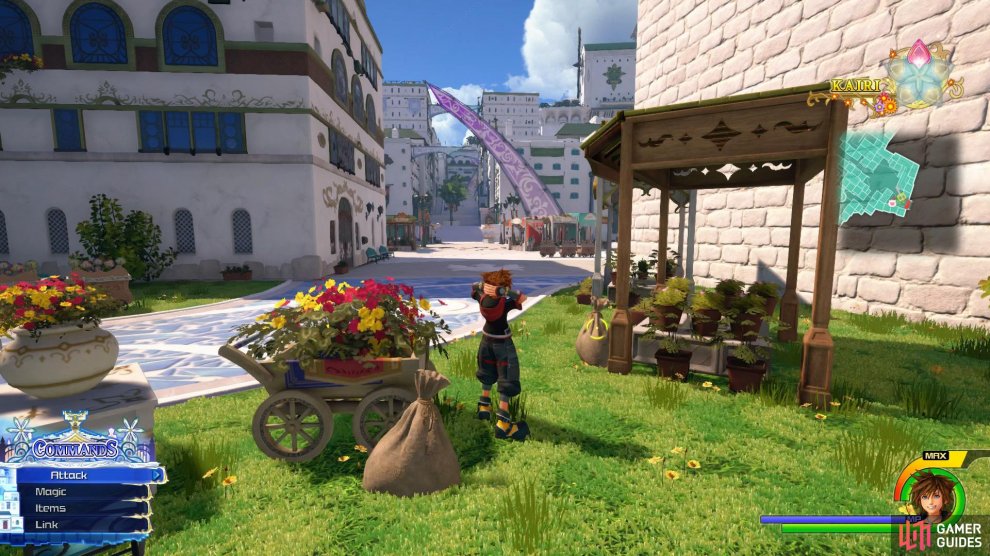 Scala Ad Caelum finally gets the treatment it deserves as a world you can fully explore.

Finishing the Re Mind campaign however unlocks the next and arguably the strongest part of this DLC, the Limitcut episode. Although there’s story reasons for what takes place here, it only sets up the scenario and the rest is down to Sora as he’s pitted against Organization XIII in difficult battles that will really test the limits of your skill in Kingdom Hearts III. If you’re buying this DLC for its gameplay and superbosses, you won’t leave disappointed as the meat of the DLC is all here with arguably some of the toughest bosses the series has ever seen. Reminiscent of the Data battles that were added to the Final Mix version of Kingdom Hearts II, each of these battles will fully test you regardless of Level, difficulty or equipment. For fans of the game’s battle system, this is great news because there’s now a reason to truly master the game outside of the usual Critical Level 1 playthrough however if you’re here for the story, you may find this a wall as finishing Limitcut is essential to unlocking the final Secret Episode and with it, the most difficult boss in the game.

This is for good reason however, you’ll need to put the skills you learn in Limitcut to good use when you reach the Secret Episode to even stand a chance. Taking on the challenge of Limitcut at Level 99 and Ultima Weapon on Proud mode proved to be incredibly difficult with most bosses being able to put you into critical HP with just a few unblocked attacks. Forget everything you thought about these bosses from the base game, you’ll have to relearn them all from the start again as each adversary has specific tells that mean they’re beatable for the truly exceptional players at Level 1 Critical. The bosses feel more fleshed out and their Desperation Moves, attacks they use throughout their battles, are a spectacle as much as they are an obstacle. You can take on the first 11 bosses in any order and there’s no correct way of going about it, for a boss one person may find rather simple, another may find it excruciatingly difficult. This helps you put more use to the new combo abilities that were added as part of the free update along with this DLC, it helps Sora’s combat feel a lot closer to his Kingdom Hearts II version and it suits the game a lot more. 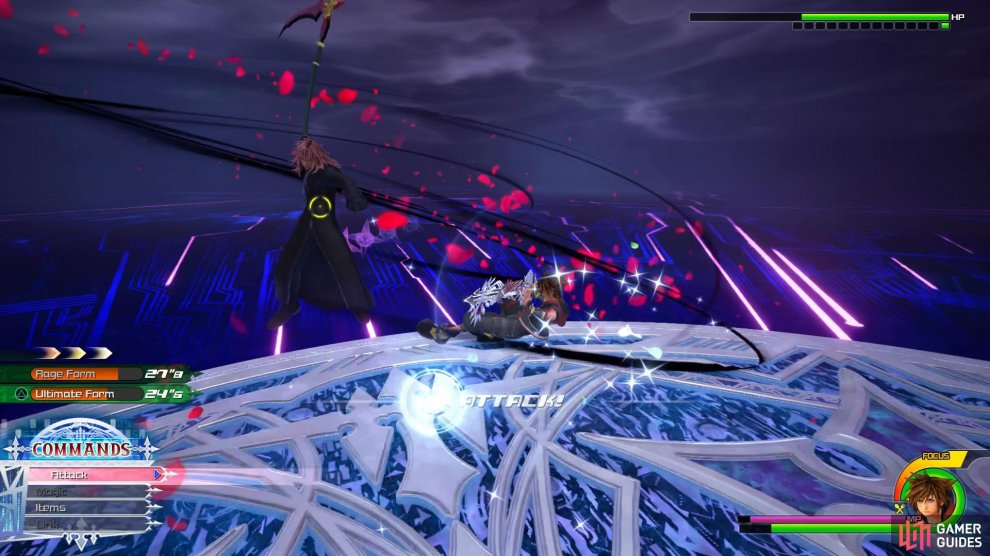 You'll really have to be on top of your game to beat the Limitcut battles, regardless of difficulty level.

As previously mentioned, defeat all of the Data battles against Organization XIII and you’ll unlock the final mode, the Secret Episode. This is nothing more than a cutscene that leads into the game’s ultimate boss, one that makes the Limitcut battles nothing more than a warmup and it’s a battle you’ll need to truly master in order to finish. Kingdom Hearts III’s ultimate ending is tied behind this with two different variations playing out based on if you win or not and this can prove to be a bit of an obstacle for those who are only in it for the story as this is not an easy battle at all. What it does do is open up a world of possibilities for the series going forward and is one fans of the Kingdom Hearts series should attempt to see through just for the craziness of it. All in all, Limitcut and the Secret Episode are a love letter to fans of the combat system and one that silences a lot of people who felt the difficulty of the base game was far too simple. The problem it does open up however is fans of the story and not so much the challenging battles are left with a brick wall to see it through.

Outside of this, you have the new Premium Menu to play around with, this is only available to new games or a new game+ after installing the DLC. This brings a whole wealth of options in two sides of the spectrum, the Easy Adventure (which unlocks EZ Codes) and the Challenging Adventure (which unlocks the PRO codes) and both menus bring a host of options you can alter along with Merits to earn. If you’re a Trophy hunter, this is important as you’ll need to obtain all of the Merits for both Easy Adventure and Challenging Adventure for the two trophies they hand out. As expected, EZ Codes brings options such as defeating enemies with a single hit (useful for those that want to witness the ending of the Secret Episode), HP/MP/Focus regen and more useful boons that will really simplify the game, even on Critical Mode. On the other hand, PRO Codes really will make your adventure much more challenging, even on Beginner difficulty. These contain options such as no Items, no Cure magic and HP/MP drain, you’ll really need to be on top of your game to unlock the Merits associated to this menu.

The final offering for the Re Mind DLC is the Data Greeting mode that unlocks along with Limitcut that brings a wealth of possibility for those that are huge fans of Photo Modes. There is an abundance of choice in terms of assets ranging from every location, prop and character, you can live out and then share, your Kingdom Hearts’ greatest wishes easily and it’s a nice distraction from some of the other content Re Mind offers. Technically, Kingdom Hearts III continues to run smoothly without any crippling bugs and the sound design is on point as ever with exceptional new arrangements for a lot of the greatest hits of the Kingdom Hearts series for all of the new bosses that you’ll encounter. The one downside here is the voice acting performance of Riku leaves a lot to be desired, an already weak performance in the base game is even weaker here which is strange considering David Gallagher has always been one of the better performers in the series.

Re Mind is a fantastic DLC for those that are seeking a greater challenge than the base game offered. For those here for the story, you’ll be left sorely disappointed but with everything else the package offers, there’s something for everyone.