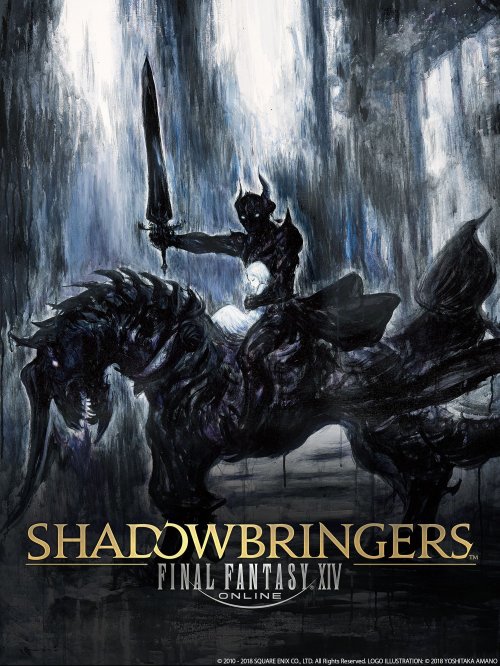 Ever since the revival of Final Fantasy XIV under Naoki Yoshida with a Realm Reborn in 2013, Final Fantasy XIV has been on an upward trajectory. He saved a dying and broken game and revitalized it into an incredible world full of wonder. Shadowbringers is the third expansion to this vision and arguably the best iteration of Final Fantasy XIV since its creation. The return to the team that wrote the Heavensward (the first) expansion is back and they deliver one of the best told stories in the Final Fantasy series in a long time. The setting for this expansion is on another world, or Shard, as it’s referred to in the game’s lore and you’ll visit places and areas that took a different path to those of the Source (the Shard that the rest of the game takes place on). This may seem that it has little relation to the current ongoing struggles with the Empire however it soon becomes clear that this expansion tells the most important story in Final Fantasy XIV yet. The shift to another world allows the game to focus on a more fantastical setting rather than the war torn setting of Stormblood which saw many similar vistas and Shadowbringers has a wide variety of stunning areas, none more impressive than the Crystarium itself, the new city based on the FFXIV’s original concept video, Project Rapture, back in 2005. 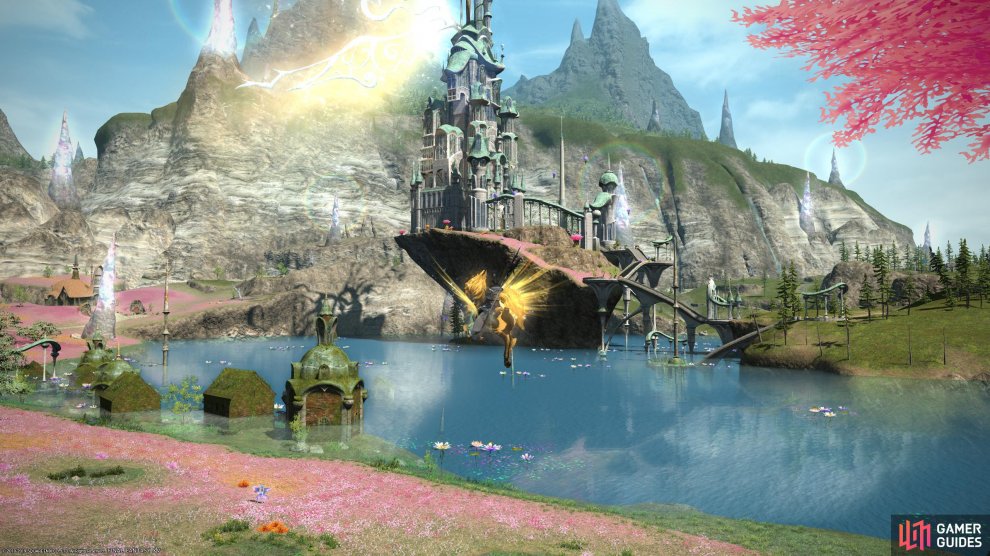 The locales are stunning.

As always in FFXIV’s expansions, the story is one of the main focal points and it doesn’t disappoint. Indeed, it is the greatest story told in FFXIV to date and probably my favourite since Final Fantasy IX back on the original PlayStation. That’s high praise obviously, but it’s well warranted as you’ll meet a great cast of characters in a world on the brink of destruction as you attempt to stop the threat of the Sin Eaters, beings of pure light, from destroying the last beacon of hope, the continent of Norvrandt. What starts as a task to seek out your missing companions and destroy the Sin Eaters, soon evolves into dealing with the mysteries of the very Final Fantasy XIV universe and plot threads that have been relevant since A Realm Reborn. On top of this is an exceptional villain who steals the scene every time you see them and one that is greyer than the black and white of Stormblood’s villain.

To help give the story more impact along with all the exciting battles that you’ll take part in is the exceptional score from Masayoshi Soken who delivers his best soundtrack yet. The expansion’s main theme is excellent and played in different arrangements throughout the expansion, there’s thrilling battle music and of course the exceptional dungeon boss theme along with the final boss theme itself, it’s all there and it elevates the expansion to greater heights. Even the area themes are exceptional and adds a calmness at times to all the chaos that surrounds the backdrop for the game and you’ll want to make use of the new changes to the F.A.T.E system to hunt down the music for your personal house. While still on the topic of sound, the voice cast deliver a memorable performance as well as returning voice actors return to give more life to the Scions, your band of adventurers since A Realm Reborn while voice talent from A Game of Thrones adds life to some of the new characters making an appearance in the game.

Of course, the largest part of any MMO expansion is the new gameplay changes and Shadowbringers does bring a lot despite keeping the overall flow to the game the same. Many of the Jobs have had changes, some for the better but unfortunately one or two didn’t get as much love. Fans of the Healer Role will find themselves disappointed by the lack of a new Healer Job and of the changes to the existing ones, only White Mage got off well. The Job needed some much needed love and they received perhaps too much of it as the Job got a new lease of life at the expense of Scholar losing a lot of its damage output and Astrologian received a whole new rework which came off leaving the job in a worse place. The two new Jobs this time around are the Dancer, a DPS Role job that focuses on ranged attacks and buffing the party along with the Gunbreaker, a new Tank that uses a Gunblade like Squall (FFVIII) or Lightning (FFXIII).

To begin with Dancer, the Job is a ranged DPS that offers some interesting ways to increase the output of your other party members. You perform dances by using either a two-step or four-step dance based on your current level. You’ll then need to match the symbols that light up to correctly perform the dance and add the buff. The most useful skill however is the ability to choose a Dance Partner that will allow you to share your buffs with them which in turns activates another gauge of the Dancer’s to increase your own damage. It’s a very rewarding job and even though their own personal DPS may be on the lower side, the increase to a party on a whole is great. Gunbreakers on the other hand is a new Tank that almost plays similar to a DPS while maintaining the defensive capabilities of a Tank. They have two cartridges in the chamber that can be charged by performing your basic combo which then allows you to either expand them on a shot or begin the lengthy Continuation (a rough translation of Renzokuken, Squall’s Limit Break from FFVIII) combo that you can weave in between your normal attacks. It’s a very fast paced Tank that feels satisfying to play and offers a playstyle a little different to the other tanks already out there. Tanks in general also got an overhaul as their DPS stance was removed and now you have an ability that you toggle on that allows all attacks to generate enmity meaning that you should have no problems keeping the enemy’s focus on the tank. 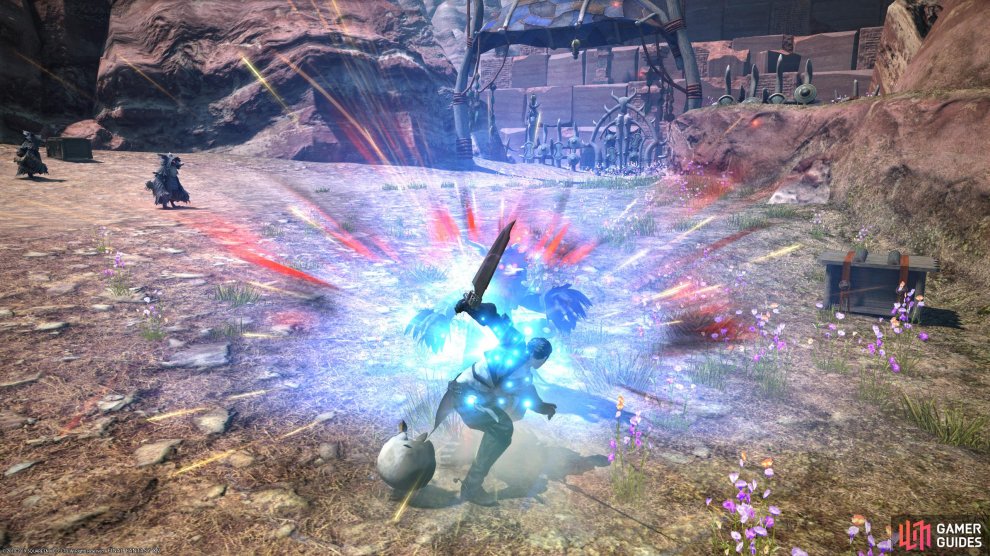 Square have also tried to revitalize the F.A.T.E system in order to get more people taking part in them and they’ve achieved this with the new Shared F.A.T.E system. In each of the new areas, after completing 6 to reach rank 2 and then another 60 to reach the max rank, you’ll be able to use the new currency obtained from them, Gemstones, to purchase various goods from the vendors there. Of special note is the Orchestrions (music scores you can play in your personal house) of each of the new areas and such is their quality, you’ll almost certainly want to hunt them down. The Trust system has also been added for all Shadowbringers story dungeons, allowing you to use the story related NPCs as companions so you can solo queue the dungeons. This adds a little more story to the dungeons and allows you to go at your own pace or players of the DPS role to get into a dungeon quicker. Each of the Trusts have their own playstyle and you’ll notice it on boss battles such as Alisae who is more reckless to the rather calm and collected Alphinaud (who just so happens to be afraid of heights). It’s a shame that this only applies to the story related Shadowbringers dungeons and hopefully this will get added to previous dungeons down the line, it will give newer players a much easier way of catching up.

There’s eight dungeons in the expansion at launch with all of them similar in nature to previous expansions however the bosses at the end of each take on a greater importance in the story. The final story dungeon however is exceptional and a sight to behold, making it probably the greatest dungeon in FFXIV to date. There are two Extreme Trials (large scale boss battles) at launch, both offering a decent challenge for midcore to hardcore players and the recent release of the 8 man Raid brings even further challenges and call backs (to FFVIII specifically). The endgame still however retains its same progression from the other expansions, earn your weekly Tomestones (an endgame currency) by running dungeons and then gearing up to take on the Extreme Trials and the Raid, be it story difficulty or the Savage (more aimed at hardcore players) difficulty.

Shadowbringers is the highest point of Final Fantasy XIV to date and it brings some much needed changes, two exciting new classes and an unforgettable story that rivals even the very best Final Fantasy stories. An excellent music score elevates the package higher and with the promise of a 24 man raid series based on Nier Automata, there’s a lot more to look forward to,