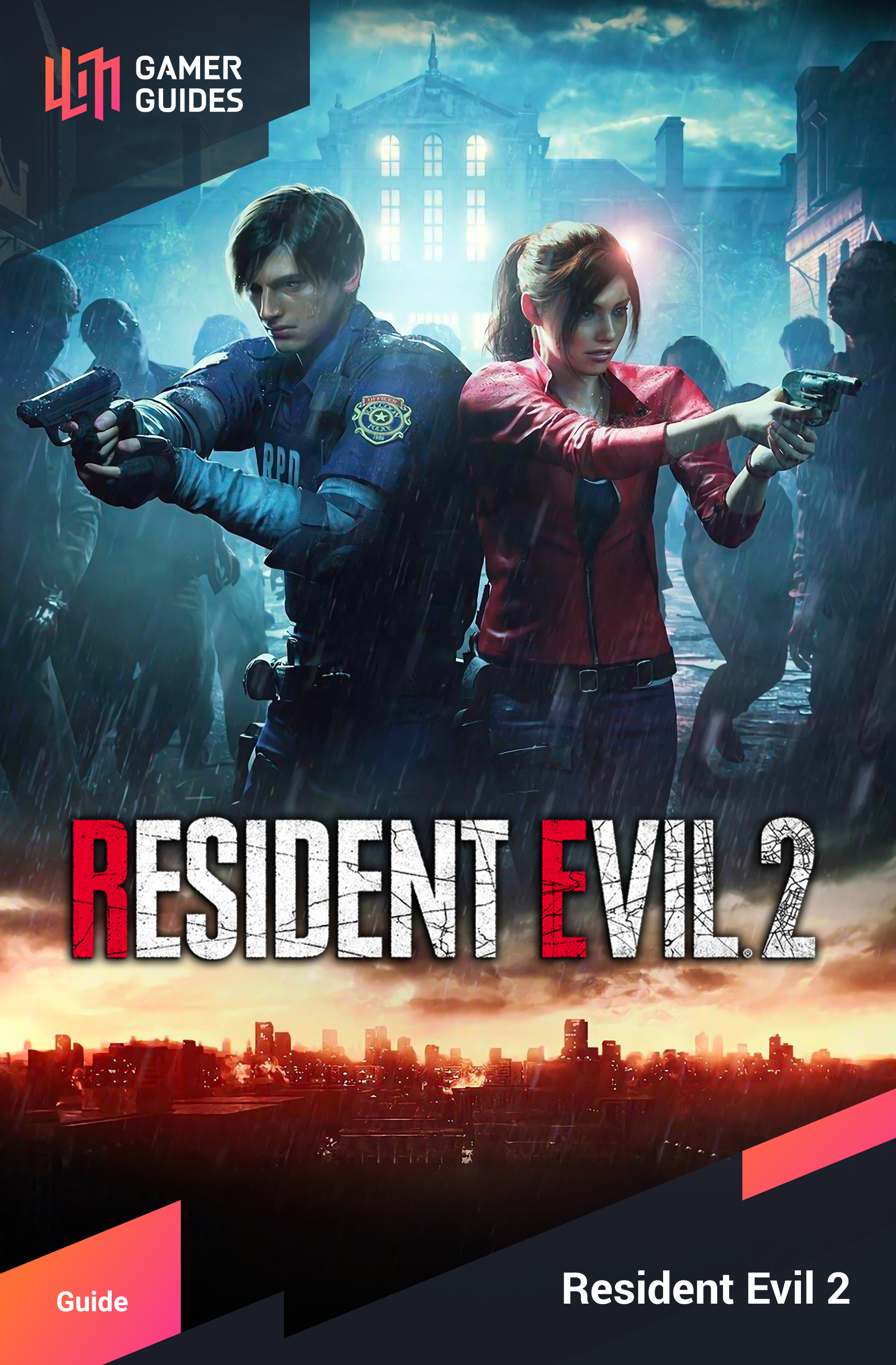 Note: This walkthrough will only direct you along the main path as well as informing you of any new Files/Raccoons that haven’t yet been discovered in the Leon A Walkthrough. Make sure you explore other areas to find ammo and healing items.

Once you gain control of Claire for the first time, walk forward until you find a Red Herb just as you reach the top of the stairs, continue onwards to find a Blue Herb sitting by the wheelbarrow before continuing all the way through to find a Cutting Tool. With the Cutting Tool in your inventory head back towards the stairs to cut the chain that’s holding the door. Inside the Guardroom you’ll find some Large-caliber Handgun Ammo on top of a box, then take a look at the lockers to find the Courtyard Key. Collect the Quickdraw Army High-Caliber Handgun from the table alongside a Hand Grenade from the heater.

Take the courtyard back to the gate where you saw Leon and unlock it to gain access to the Police Station, head through and grab the Wooden Board to your right and the Large-caliber Handgun Ammo from the barrel then go through the door and make your way across the corridor to the East Office. Use your Cutting Tool to unlock the door, inside you’ll be able to find a Green Herb to your left, a Flash Grenade directly ahead on a table and some Large-caliber Handgun Ammo from the Zombie. Now head over to the north side of the office to find some Gunpowder on the row of desks before finally heading to the soutwest corner of the room to find a Round Handle and some High-Grade Gunpowder (White).

Note: You’ll now be able to safely discard the key as indicated by the tick mark.

Exit the office and head through the Watchmen’s Office and collect the Scrap of Paper from the desk, then follow the corridor around and head left before the stairs, grabbing the Flame Rounds from the shelf to the right before entering the Break-Room. Inside you’ll find a Blue Herb on the table, then open the lockers to find High-Grade Gunpowder (White) and Large-caliber Handgun Ammo. Finally, enter the second portion of the room to find some Submachine Gun Ammo from the sink and an Electrical Part before saving your game.

Once you’ve entered the Main Hall, make your way over to the computer to trigger a cutscene, now make your way to the couch just before the Goddess Statue to find the Notebook with Missing Page and then head to the Operataions Room to find the Map. Open the door to the right of the board with your Cutting Tool, head through to find an Electronic Gadget, unlock the door to reach the Saftey Deposit Room. Use your Key Card at the back of the room to collect the GM 79 Grenade Launcher alongside some Flame Rounds. 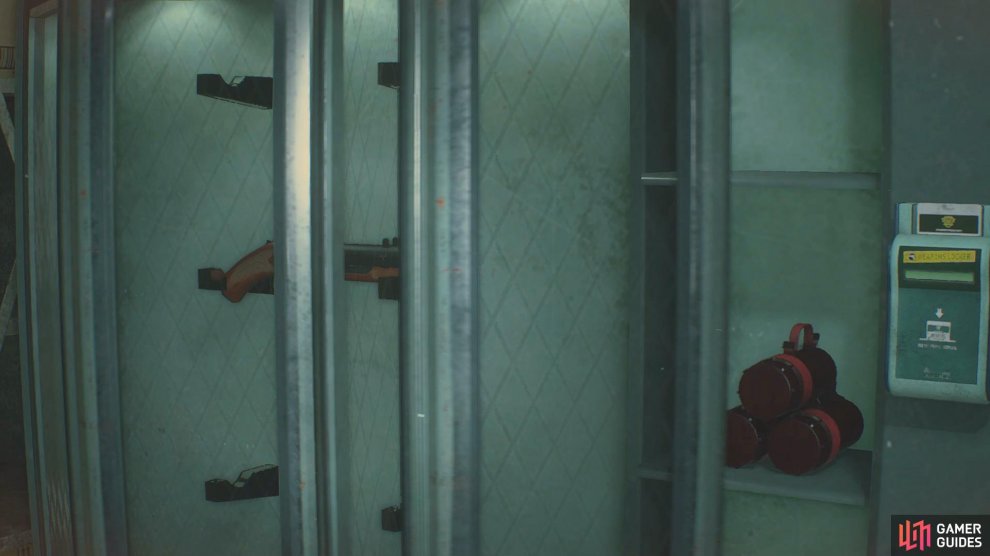 Once you’ve retrieved the Grenade Launcher, head to the Dark-Room to save, then make your way up to the 3F and continue along until you reach a hole in the wall, enter to find the Spade Key before proceeding further in to reach the West Storage Room. Once inside follow the room around until you can enter another door to the Library, head downstairs and collect the Red Book before using the Spade Key to unlock the door back to the Main Hall.

Make your way to the 2F and proceed onwards until you can go right into the Mens Locker Rooms, inside you’ll find the Bejeweled Box to your right. Use the Round Handle to stop the steam from coming through, this will allow you to walk further in. Head through the door into a corridor to the S.T.A.R.S Office. Once you’re inside go to the northeast corner to find Leons Memo, then enter the smaller room in the northwest corner to find a Battery, combine this with your Electronic Gadget in your inventory to receive the Detonator and exit. Take a left from the office to find a locked door, unlock it to gain access to the Lounge.

Take a look to your left as soon as you enter the Lounge to find a Tin Storage Box, examine and rotate it to retrieve a Roll Film and then collect the Police Station Upper Floors Map before heading back to the Dark-Room. On the way to the Dark-Room use the Spade Key to unlock the West Office door which will open a shortcut, but before sprinting through, you’ll be able to find an attachment by unlocking the locked desk.

To open the desk you’ll need to find two combinations to open both locks. There are three nameplates on each side of the desks, you’ll need to remember the first letter of all three plates and put them into the lock (for example, Neil, Elliot and David would make “NED”).

The right side combination is MRG and the left side combination is NED, inside will be a Speed Loader. Now head over to the Dark-Room and place the Roll Film into the sink at the back of the room to reveal the third and final missing piece needed to able to unlock all three Medallion Statues.

Head back to the Lounge and interact with the Lion Statue to input the combination that can be found on the Scrap of Paper you found earlier; Girl and Boy, Scales, Snake without tail, now head to the Lion Statue that’s located above the stairs. The combination for this statue is Crown, Fire on a Pedestal, Bird, this can be found from the photo you revealed recently. Finally, head to the 3F West Storage Room with the Detonator in your inventory and connect it to the C4 that’s on the wall in the soutwest corner of the room, blasting it wide open in the process.

After the explosion, head through the hole to reach the Maiden Statue, input the combination Ram, Lyre, Crow to retrieve the final Medallion.

Before placing the Medallions in the Goddess Statue and heading down to the Underground Facility, bring the Red Box to the Art Room. Once you’re inside, head south and pick up the Statue’s Left Arm off the table, combine this with the Red Box to gain the State’s Left Arm with book, connect this to the Statue to receive the Scepter. Examine and rotate it to interact with it and gain the Red Jewel.

Note: Combine the Red Jewel with the Bejeweled Box to find the S.T.A.R.S Badge

Head to the S.T.A.R.S Office with the badge, once there examine and rotate it until you can interact with it to convert it to the USB Dongle Key. Plug this in the computer and interact with the monitor to open the gate to find the MQ 11 Submachine Gun, retrieve the USB before heading back to the Goddess Statue.

Note: Before going down to the Underground Facility, you might want to head into the West Office to unlock the Safe which will give you a Hip-Pouch.

Once you’ve entered the Underground Facility, head over to the Typewriter and save. 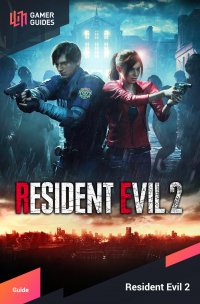